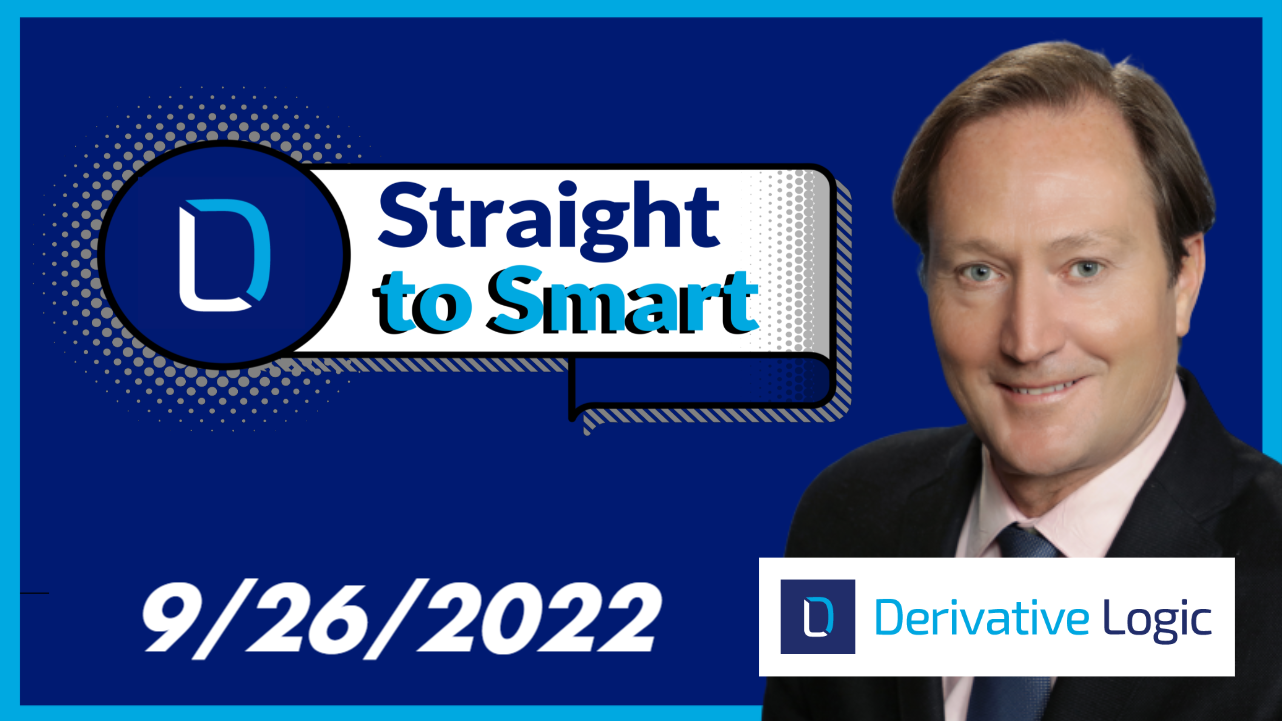 Yields across the entire Treasury curve lurched higher last week, after central banks worldwide aggressively tightened monetary policy, amplifying recession fears. A sell-off in stocks was part of the mix, with the S&P 500 coming within a hair of breaching its June 2022 low of 3,666. Elsewhere, the price of a barrel of West Texas Intermediate crude oil slipped below $80 on global growth concerns, to $78.90, as the US Dollar continued its strengthening tear to a fresh 20-year high. The US 2-year vs. 10-year Treasury yield curve wrapped the week at -0.52%, its most inverted level since 2000. Pro-tip: To learn more about what inverted yield curves mean, click here.

For the week, the 2, 5, 10, & 30-yr UST yields added a respective 27, 30, 19, & 9 bps.  The tapering increases, amid the lengthening of maturities, mostly reflects the bond market’s continued effort to reprice to an increasing likelihood of more Fed rate hikes down the road. As such, we expect short-term rates to move higher in the coming weeks.

One gauge of hedging costs is  the movements of 3-month Term SOFR, given that it’s the most traded of the SOFR maturities. 3m Term SOFR (CME) increased ~5 bps last week to 3.52%, backing off its new 3.54% high seen late in the week. The implied yield on the 3m SOFR futures contract for 1-year (Sept ‘23) climbed 33 bps last week to 4.41%.  The Mar ’23 futures contract had the highest implied yield for the 3-month SOFR index at 4.66%. This relatively tight range continues to reflect the market’s current view that 3-month SOFR will peak in the next 6-months – along with the Fed Funds rate –  followed by a gradual decline over the next three years as the Fed eases.  Both fixed swap rates and cap prices rose as a direct result.

Interest rate volatility, a key driver of the cost of rate caps, remains high, and breached the top end of its recent four-week range last Friday. For some perspective,  rate volatility peaked in early July as simultaneous inflation and recession concerns became increasingly forceful, and, despite last week’s rise, volatility is still well off its July high.

Buckle up, the Fed will continue to hike rates through 2022 and keep them there for longer.

Markets expected an aggressive message from the Fed during its monetary policy meeting last Wednesday but ended up getting much more than they bargained for. The Fed delivered its third straight 75 basis point hike, implying that it’s got another 125 basis points of hikes locked and loaded between now and the end of the year, with the Fed Funds rate peaking at 4.6% (it’s 3.25% now) sometime in Q1 2023. That implies a 75 basis point hike is likely in November with  another 50 basis point hike in December.

The Fed revised its economic projections substantially, now seeing economic growth at just 0.2% this year, down from its 1.7% forecast back in June. The Fed expects the unemployment rate to rise to 4.4% next year (it’s 3.7% now) and that red-hot inflation won’t cool to the Fed’s 2% mandate (it’s 8.5% now) until 2025. The Fed made it clear that smothering inflation remains its top priority, despite the likely collateral damage of lower economic growth and job losses that come with amping up the fight.

Our take: Fed members seem more unified now than in past meetings to hike rates more aggressively,  even more so than markets have priced in. If they deliver on that commitment, it will mean a steeper downturn than what markets expect right now. The Fed seems set to act as aggressively on rates as they did in 2008, but in the opposite direction of course. Back then, the impact on financial markets was not immediate, but worked with a lag. Yes, sectors like housing market have seen quite a strong reaction already, but the jobs market and corporate earnings really haven’t – yet. Expect the same lag this time around. Recession anyone? It’s unavoidable now, and a question of when, not if.

The Bank of England (0.5%), the Swiss National Bank (0.75%), Norway’s Norges Bank (0.5%) and the central banks of Taiwan (0.125%), the Philippines (0.5%) and South Africa (0.75%) all raised policy rates last week. Switzerland’s hike took its policy rate into positive territory, leaving the Bank of Japan as the lone global holdout in maintaining a negative interest rate policy, helping the US Dollar to rise to its highest level versus the Japanese yen since 1998. Elsewhere, after hiking rates 75 basis points earlier this month, European Central Bank (ECB) President Lagarde prepped markets for more rate hikes in the coming months amid stubbornly high inflation. Finally, Sweden’s Riksbank raised its benchmark lending rate by a more-than-expected 100 basis points to 1.75%. Such moves by the world’s central banks only embolden the Fed to hike more with little fear of global economic disruption.

Housing markets are bearing the brunt of rate hikes

The Freddie Mac 30-year average mortgage rate touched 6.29% last week, its highest level since 2007 and twice what it was at the start of the year, adding downward pressure to a sector that is already in trouble. The National Association of Homebuilders Market Index, which started the year at 84, fell for the ninth straight month to 46. While multifamily construction drove US housing starts in August, existing home sales fell for the seventh consecutive month. The median sale price of an existing home in the US dropped to $389,500 from a peak of $413,800 in June.

What to watch this week – focus on housing and the consumer

The Fed’s rate hikes have had the greatest impact on the housing market over all others, and this week’s slate of economic data will show just how much further the pain has intensified. But first, some perspective: The median US home price in August was almost 40% higher than in the same month of 2019, average mortgage rates have recently spiked beyond 6.2%, compared to 3.6% in the second half of 2019. The median monthly mortgage payment has increased to $2,700 from just $1,500 before the pandemic, an 80% jump.

For many Americans, it seems that owning a home is becoming increasingly out of reach, and this week’s data will offer a refresh of where things stand (new home sales on Tuesday, pending home sales on Wednesday). It seems that home values will have to fall substantially, although there’s no sign of it yet, as we’re still early in the adjustment process (Case-Shiller, Tuesday). Given how much income growth has lagged the rise in home prices, the inevitable adjustment probably won’t be pretty. Any sharp, downward adjustment would weigh heavily on household spending as homeowners suddenly feel less wealthy.

Outside of housing, things aren’t looking quite as bad. The continued fall in gas prices has likely improved the sentiment of households, freeing up their propensity to spend (consumer confidence, Tuesday; University of Michigan consumer sentiment, Friday.) The jobs market is tight (jobless claims, Thursday) and income growth is still robust (personal income, Friday). Given that most of us still base our purchasing decisions on our jobs-related income and given that our sense of job security influences whether we’re likely to assume the long-term risks that come with home ownership, the Fed will be inclined to raise rates as long as the jobs market remains stable.

Be mindful of a policy lag.  Remember that rate hikes work on the economy with a significant lag. Considering the first rate hike for this cycle only just occurred in March ’22, the intended effectiveness of the Fed’s cumulative 300 bps of rate increases (to date) have not yet reached their intended potential.  The flow-through effects take far more time. Add to this the Fed’s ongoing balance sheet reduction efforts that got more aggressive this month, and it sets the stage for tighter financial conditions spreading through the economy as 2022 winds down into H1 2023 with the policy changes already administered.

At this stage of the Fed’s policy initiative to combat inflation, the Fed wants tighter financial conditions … lower stock prices, wider credit spreads, and higher borrowing costs.  While these dynamics could enable the Fed to achieve its policy goals more successfully, they are also likely to significantly lift market volatility along the way. 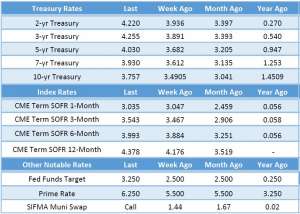 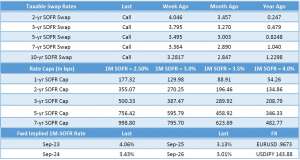 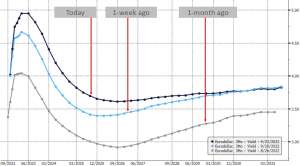 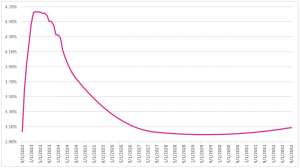 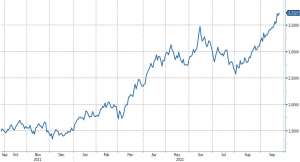 Jobs A Gauge For How Far Fed Goes
We use cookies to give you the best web experience. If you continue to use this site it is deemed you consent to this site's use of cookies.OkPrivacy policy
Scroll to top