Rates Jittery Ahead Of FOMC 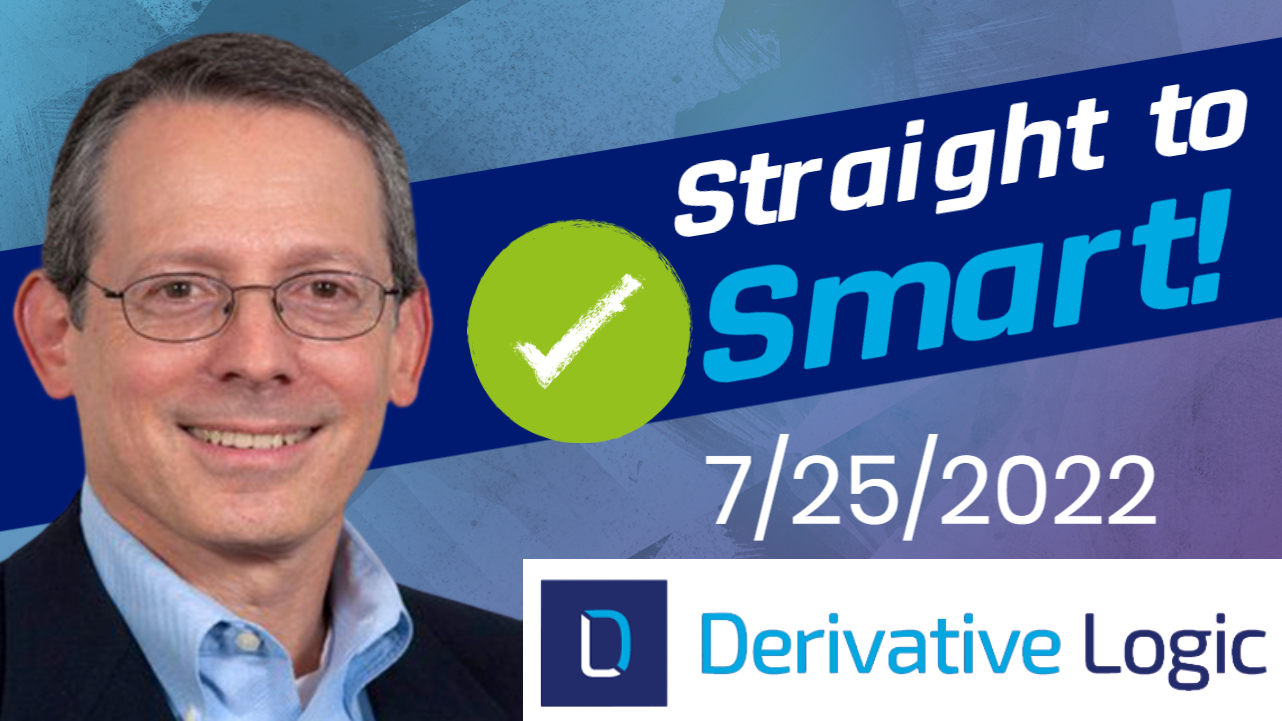 What You Missed: Interest rates were again impacted by shifting concerns over inflation and economic growth last week.  Rates shifted notably as the week progressed amid an uplift in stock prices, which led term yields higher only for a time.  Later in the week, medium and long-term rates fell sharply amid an outsized 50 bps rate increase from the European Central Bank – the first hike in 11 years – and more U.S. economic data pointing to a softening economy.  For the week overall, short-term U.S. Treasury (UST) yields out to 6-months increased while rates for 1-year and longer fell significantly.  3-month Term SOFR (CME) increased a half bp to 2.56% last week, up 44 bps so far in July.

Implied option volatility eased somewhat again last week despite shifts in the yield curve while actual volatility in short-term rates softened more, suggesting that implied vol, a key input variable for cap pricing, may ease a bit further.  Another key variable affecting premiums are implied forward rates, which are impacted by the yield curve.  As the curve has flattened, with short-term rates moving higher to align with expected Fed rate hikes, and even inverting a bit, implied forward rates for SOFR suggest diminished future increases later this year and therefore some possible relief in cap premium costs may be forthcoming.  Please check with us on pricing as the market is continuously shifting.

One-month T-bills increased the most last week, up 26 bps to 2.04% and yields for 3-yr USTs experienced the biggest decline, down 21 bps to 2.91% per Bloomberg.  Ten-yr UST yields ended Friday at a near 2-month low of 2.75%, falling 16 bps for the week, to below the 6-month T-bill rate of 2.90% … marking a 15 bps inversion from a relatively short maturity. This has happened as short-term rates have shot up amid the expected rise in Fed funds over the coming months and due to an overall consolidation in medium and long-term interest rates given growing economic uncertainty.

As of last Friday’s close, 6-month UST yields mildly exceeded 5-7-yr UST yields in addition to the more sizeable inversion noted above between 6-month and 10-yr.  In the event the U.S. yield curve inversion pulls-in even further to the front-end of the yield curve, scenarios where 1- or 3-month interest rates would exceed rates for medium and longer-term maturities, opportunities to reduce future hedging costs would emerge.  At the pace with which the U.S. interest rate environment is changing, the relationship between rate levels for funding indices such as SOFR and SOFR’s own implied future rates should be integral to rate hedging discussions.

Along with the mild improvement in credit markets last week, the S&P 500 stock index increased ~ 2.5%, for its best weekly outcome in a month.  More encouraging, the index has risen 3 of the past 5 weeks, an outcome not seen since Q1.  Q2 earnings season is still at an early stage with 21% of the companies in the S&P 500 having reported results. For the most part, results have been mixed so far.

Viewing this earnings season from the perspective of its interest rate impact, results so far do not send a dire warning of an impending recession.  According to FactSet, of the S&P 500 companies that have reported earnings so far, 68% have reported EPS exceeding estimates.  If upcoming earnings releases continue to show an economy that is not in trouble, the equity market may further attract incremental capital and limit the potential for further yield declines in risk free USTs.

U.S. dollar retreats after the ECB rate hike but in an unconvincing way

The broader DXY U.S. dollar index fell 1.2% last week, after climbing 3 straight weeks, amid the European Central Bank’s 50 bps rate hike on Thurs.  This was not a large move, in the context of the dollar’s relentless surge since Feb, as the Fed is now on deck to deliver its own 75 bps slugger on Weds.  The euro (currency) strengthened 1.3% to $1.02 last week due to the narrowing in short-term rate differentials between the eurozone and U.S.

Commodities and retail gasoline ease further, but can it last?

Last week, wheat and corn prices fell further.  Front contract wheat futures prices are down for a 3rd straight week while corn’s lower for a 2nd week.  Both commodities are pricing lower than when Russia invaded Ukraine 5 months ago.  Furthermore, futures contracts for mid-2023 delivery, for both commodities, are also pricing lower.  Retail gasoline prices fell further last week and have now fallen uninterrupted for 6 weeks.  According to AAA, the average price of regular gas ended Friday at $4.38/gal, down 64 cents from the mid-June record high of $5.02.  WTI crude oil prices ended last week at $94.7/bbl, the lowest since Apr 11th.

From an interest rate perspective, lower food and energy commodity costs – if sustained – have the potential to ease inflation pressures.

On the home front, June housing starts fell 2% and building permits dropped 0.6% while existing home sales declined 5.4% for a 5th straight monthly decline to a 2-year low.  Median home prices, for single family existing homes, increased ~ 2% last month to a record $423.3k.  Prices were also a record 40% above the 5-year moving average of $301k.  This National Association of Realtors data series goes back over 50 years.  There is a limit to how stretched, over a 60-month period, this relationship can get … and we believe it is here amid softening home sales volumes and some increases in supply.

What to Watch – FOMC outcome on Weds

The Fed is expected to announce another 75 bps rate hike at the conclusion of its July monetary policy meeting to combat inflation’s forcefulness.  The action would bring the target Fed funds range to 2.25% – 2.50%.  It is expected Chairman Powell will signal that the Fed may consider dialing back the intensity of subsequent rate hikes, beginning with the September 21st rate decision, within the context of a slowing economy while remaining vigilant on inflation.  We look to see how far the Fed Statement goes in referencing unfolding economic weaknesses or whether inflation concerns continue to overpower the tone of the Fed’s July communique.

The Conference Board’s measure of July Consumer Confidence, on Tues, is expected to have declined to a 17-month low amid rising layoffs and economic uncertainty.  New home sales, on Tues, are expected to have declined 5% last month while pending home sales on Weds likely fell 1%.  The first look at Q2 GDP will be released on Thurs.  An anemic increase of just 0.5% (real GDP annual rate) is anticipated amid expected declines in business investment, reduced inventory building and a slowing in consumer spending.  Also, the high-frequency release of weekly jobless claims will take place Thurs.  With the July employment report release closing in on Aug 5th, the weekly claims figures will be an attention getter.

While the Fed’s willingness to tame inflation is in an ultra-high gear, the inflation problem facing America right now may be particularly tough to rein in over a period of months or calendar quarters.  There is not much confidence around this issue presently.

At this juncture, there’s much hope that annual inflation peaked in June, along with retail gasoline, but at the same time there’s angst that the many drivers of inflation haven’t been put behind us.  We still face a most unstable geopolitical backdrop that involves energy natural resources and food supply just as a protracted heat-wave and drought have intensified.  Supply chain constraints elsewhere remain evident.  With the job market tight, labor is more likely to seek its fair share of the economic pie.  And now that the higher cost of homes and rents have finally penetrated the inflation data in its typical lagged manner, shelter costs are likely to be an ongoing inflation pressure.

As a consequence, it’s difficult to be sanguine over the likelihood that the Fed is on track to soon tame inflation.  Because of the uncertainty over how entrenched inflation drivers have become or even worse, which new price threats may yet surface, it’s most unlikely that a lasting resting place has yet emerged for much of the U.S. rate structure.  Buckle up!  Over the coming days, before and after the FOMC rate decision, expect the inflation and recession focus to continue to oscillate. 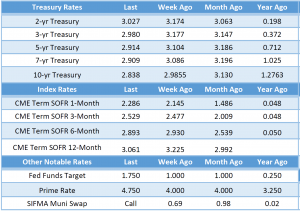 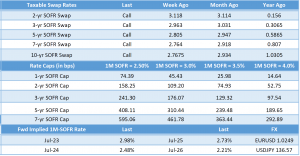 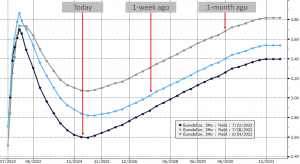 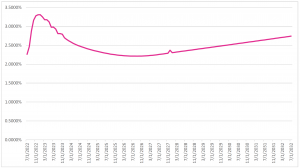 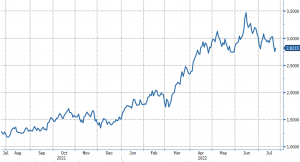