Last Week: Interest rates and equities were dramatically lower on the week as the spread of the coronavirus outside of China raised global recession fears. The yield on the US 10-year Treasury note fell off the charts to a record low 1.14% from 1.46% a week ago. It’s trading at an astounding 1.07% as of this writing (the 30-year US Treasury yield traded to a record low as well). 1-month LIBOR followed suit, but by a lesser degree, falling to 1.51% from 1.61% a week ago. Oil fell sharply too, declining $8.50 to $44.48, as the US Dollar and Gold both weakened (conventional wisdom would expect higher Gold prices). Treasury yield volatility, a key influencer on the cost of rate caps and swaptions, spiked to 7.58 from 5.55 last week. For some perspective, Treasury yield volatility hasn’t been that high since February of 2016.

Coronavirus update: Fiscal and monetary policy responses are coming. As the coronavirus outbreak has spread well beyond China’s shores, an economic toll on America’s economy now appears to be mounting even before the official US case count materially increases. Chinese manufacturing seems to have collapsed to levels lower than during the 2008 financial crises. With it essentially serving as the “factory of the world” it’s just a matter of time before we see supply disruptions here in the US and the resultant economic contraction shortly thereafter. While we certainly care about sick people and deaths from the outbreak, this report is about interest rates. If you asked markets, the Fed will cut rates between three and four times this year, starting at their next meeting on March 18th. You can plan on at least a 0.25% cut, and maybe even a .050% cut at that meeting. With no end in sight to the spread of the virus, the billion-dollar question now is: can the Fed wait that long to cut rates?

Rates are at record lows – So what’s a borrower to do?

1) Consider a rate cap with a lower strike or a longer term than the lender requires. You’ll be creating a structure similar to a fixed rate loan without any of the prepayment penalty                       headaches.

2)Pay attention to the LIBOR floor in the loan agreement and do your best to negotiate it to 1.00% or lower. Otherwise, you’ll essentially have yourself a fixed rate loan as LIBOR                           moves lower – likely not what you originally intended.

What to Watch This Week: It’s job report week again. While the report is historically the single most influential piece of economic data for interest rates, the fast-breaking nature of the virus outbreak makes this month’s jobs report pretty much irrelevant. We expect 180K in new jobs, the unemployment rate to retrace to 3.50%, and for wages to post a modest 0.3% rise.

What will be important on the data docket this week is the often-overlooked Fed Beige Book – a compilation of business conditions reported to district banks – and the ISM (Institute of Supply Management) surveys, unit vehicle sales and jobless claims.

Monday’s and Wednesday’s ISM surveys will help gauge business sentiment around the anticipated virus-induced economic shock, so any downside surprises will get attention from markets. Similarly, Tuesday’s vehicle sales will signal if consumer households started to hesitate at the prospect of big-ticket purchases as financial markets swooned. Lastly, Thursday’s Jobless claims will serve as a canary in the coalmine of sorts, providing a timelier read than Friday’s jobs report on the degree to which the labor market is deteriorating. All told, we expect the data to be solid, but mostly unreliable as a barometer of the current state of the economy.

Big Picture: We’ve advised you to watch the equity markets for sign of weakness for weeks now. We suggested that if a sizable sell-off did occur, that the Fed would likely be prodded to cut again. Well, now that the selloff has come to pass, and driven by a hard to understand, and unpredictable virus outbreak nonetheless, Fed cuts are now in play. On the flip side, if the virus threat rapidly dissipates and markets recover, the impact on U.S. growth could still be minimal. However, based on the experience of the last major equity market swoon – in the fourth quarter of 2018 – the financial shock alone could significantly weigh on economic growth prospects and be reflecting in interest rates for awhile yet. However, if the equity market decline worsens or the outbreak becomes more severe – in terms of U.S. travel restrictions, quarantines, supply chain disruptions and other economically restrictive measures you can be assured that Fed rate cut(s) are coming. It’s just a question of when, how much and how often.

Regardless of our view, the deterioration in the economic outlook surely merits some sort of policy response, though per recent commentary from Fed officials, we should probably be skeptical of the efficacy of the monetary lever. From a macro perspective what’s equally troubling is what happens afterward, and we should all hope that the monetary cure isn’t worse than the disease. Skepticism remains warranted about the tangible economic impact of lower interest rates (from already minuscule yields and with corporate indebtedness already at record levels). If the economy deteriorates to a point where lender’s appetite to lend becomes an issue, than a revival of some sort acronym-type facility (remember TARP? or Operation Twist?) might prove more effective than slashing rates to the bone and hoping that banks will lend.  It doesn’t matter how low interest rates are if you can’t get a loan! 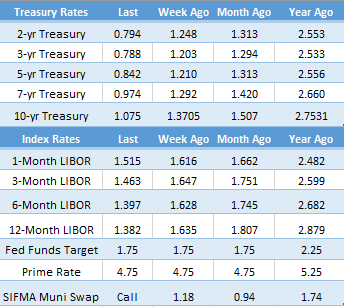 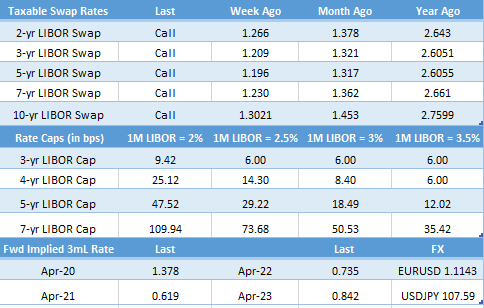 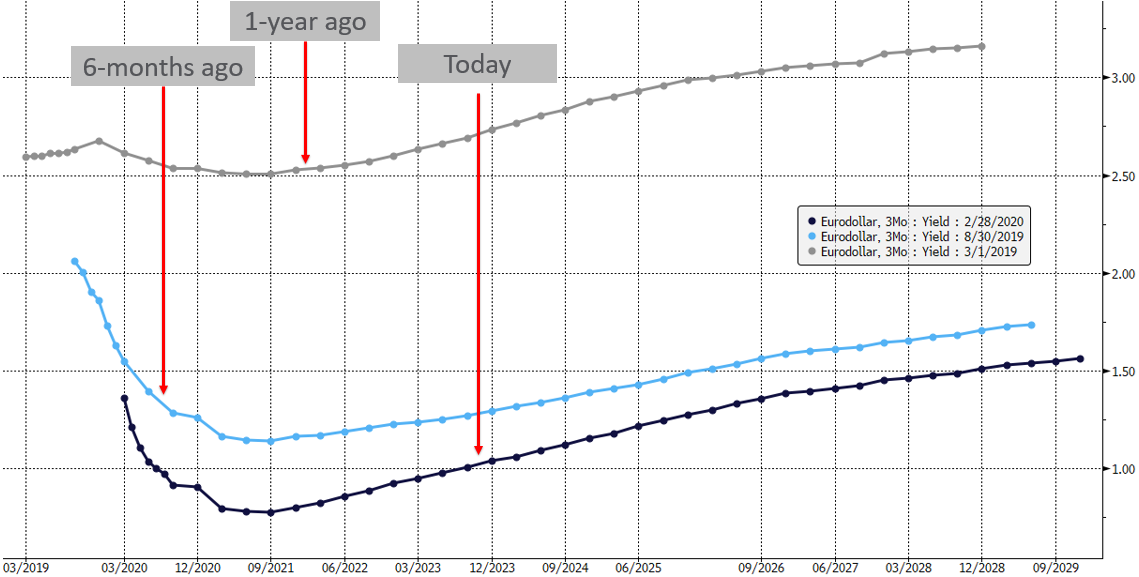 Take Me To Zero
Scroll to top