Last Week: Interest rates and equities fell on the week as concerns over the spread of the coronavirus were reignited. The yield on the US 10-year Treasury note declined 11 basis points to 1.46%, its lowest level since September 2019, and 1-month LIBOR followed suit, falling a more muted two basis points to 1.63%. The price of a barrel of crude oil rose a dollar, to $53.10, as the US Dollar and Gold both strengthened as global investors sought safe havens amid the growing uncertainty about how the threat of a pandemic will impact the world’s economies. Treasury yield volatility – a key driver of the cost of rate caps and swaptions – spiked to 4.94 from 4.50 this time last week. As of this morning, the 10-year Treasury yield is trading at 1.3640%, its lowest level since 2016.

With rates this low, it’s imperative that you review your existing interest rate hedges, specifically interest rate swaps, for opportunities to extend them, as well as review debt that’s coming due in the next few years. There is great opportunity to take some of the refinance uncertainty off the table at very attractive interest rates. Call us to learn how.

Secondly, this is an opportune time to consider defeasing agency or conduit loans for the same reasons. In many cases, the numbers just make sense right now.

Downward pressure on rates persists amid a bloom of new virus cases outside China. Reports from China at midweek indicated that the pace of the coronavirus spread had slowed dramatically, but figures published over the weekend showed a new surge in cases in Hong King, South Korea, and Italy. While we’ll leave others to cover the details elsewhere, just know that the sense of caution – and the downward pressure on interest rates – is as strong as ever and shows no sign of abating. The billion-dollar question now is how China’s virus-driven economic wallop will ripple through other economies, specifically the US. Given that China is still largely the world’s factory, concerns about supply chain disruptions, a resultant decline in new product orders, and the eventual slowing of production globally are front and center.

Fed meeting minutes showed no virus cut lies in waiting – yet. While America’s central bank remains firmly on the monetary sidelines, the minutes from last months policy meeting showed it is concerned that the coronavirus is a new headwind for the global economic outlook. However, Fed members didn’t express a strong preference to provide fresh cuts just yet, instead choosing to rely on last year’s “insurance cuts” to carry us through. While the Fed sounds cautiously confident, what worries us is the Fed’s ability to rescue the economy if things go horribly wrong. With rates already at ultra-low levels, and the Fed’s balance sheet approaching financial crises highs, the Fed is low on ammunition to combat a significant downturn. Markets have boosted rate cut bets in the meantime, calling for two cuts in 2020 as recently as last Friday.

On the bright side, recent rate downdraft serves as rocket fuel for US housing. Low US interest rates have reinvigorated America’s housing market, evidenced by recent data that showed the demand for new homes is on the rise, with building permits reaching their highest level in 13 years amid rising wages and low levels of unemployment.

On the data front, US sentiment indicators sent conflicting signals. Two encouraging manufacturing index readings reported by the Fed were offset by downbeat readings from Markit’s US purchasing managers’ indices. The Empire State Manufacturing index rose to a whopping 12.9 in February from 4.8 in January while the Philadelphia Fed index jumped to 36.7 from 12. In stark contrast, last Friday’s flash Purchasing Managers Index, an index of the prevailing direction of economic trends in the manufacturing and service sectors, showed the manufacturing component slipping to 50.8 in February from 51.9 in January and services falling to 49.4 from 53.4.

The contraction in the services sector metric was eye opening given the fact that most of the growth in jobs has occurred in service sectors for many months now. Some attributed the slip in activity to the coronavirus’s crimping supply chains, making firms hesitant to place orders. Our take: Despite the conflicting numbers, nothing has really changed to prompt a turnaround in America’s manufacturing sector, and likely won’t until sometime in H2. Despite promises of a wave of new manufacturing jobs, they aren’t coming back en masse anytime soon.

What to Watch This Week: The key economic data releases this week are the second vintage of Q4 GDP and the durable goods report, both on Thursday, and the core PCE report on Friday. Overall, we expect the data to paint a mixed, but solid picture of US economic growth.

On the event front, there are just a few speaking engagements from Fed officials this week. Markets will be parsing every word Fed officials say regardless, on watch for any indication that the Fed’s confidence is wavering or that the fallout from the virus is, to quote the Fed, beginning to constitute a “material change in the outlook.” Based upon financial markets reaction to the mounting virus fears this morning, the threat to the US economy is getting real.

Big Picture: Despite the virus-driven doldrums of late, the tone of last week’s data releases painted a picture of a solid US economy. Regional manufacturing surveys from the New York and Philadelphia Fed districts sharply topped expectations, home-builder sentiment held near recent highs as building metrics beat forecasts, and the index of leading economic indicators – an important forward-looking measure of the growth outlook for the next few quarters – posted its strongest gain since 2017.

Without a doubt, the positive tone can turn on a dime however, and economic data can abruptly deteriorate given the fast-changing nature and unpredictability of the outbreak. As of now however, data gauges point to an economy that is more responsive to ultra-low financing costs, diminished trade uncertainty and low energy costs. Want a quick read on how the Fed may respond to the new outbreak? Watch the equity markets, as they serve as the most telling barometer of sentiment and overall fear. Should they take a steep dive and stay there, the probability for a Fed cut will rise significantly.

As markets sell off this morning with similar speed that we saw in January, this time around, there is perhaps more substance to the fear as recent headlines suggest that the human and economic impact of the virus is spreading far beyond the boundaries of China. Markets are now pricing in a significant probability of a recession in the U.S. and elsewhere. You might not know it by looking at stock market prices that are still within a few percent off their highs, but fixed income markets, particularly government bonds, are pretty unequivocal about the new risks to economic growth. It was only a couple of weeks ago that we observed that markets were pricing in a U.S. recession as a coin flip – since then the odds have surged to 67%, above the peak in the aftermath of 2018’s equity market meltdown.

Are markets overreacting? Perhaps. If push comes to shove though, the Fed, and perhaps other central banks, will be cutting rates again. But as perceived recession risks rise, it’s worth considering that they’d be doing so for reasons that have nothing to do with the cost of money. While there may be no cure should the economic impact of the virus prove to be a serious one, at this point it’s reasonable to conclude that fiscal policy (e.g tax cuts) will be a much more effective treatment than monetary policy (e.g. more rate cuts). 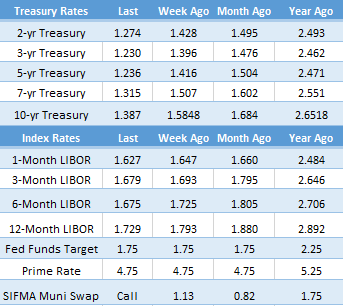 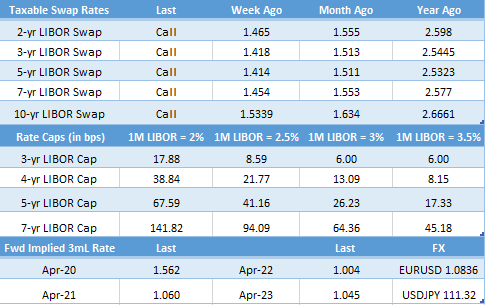 Rates off a Cliff: Now What?
Scroll to top