Last Week: Interest rates fell, and equities rose amid signs that most major economies in the world likely hit bottom in April. The yield on the US 10-year note ticked up 3 basis points from a week ago to 0.73% – near the midpoint of its 13-basis-point range – while 1-month LIBOR fell very slightly to 0.19% as investors shook off jitters stemming from a new spike in COVID-19 cases in many US cities. The price of a barrel of West Texas Intermediate crude oil rose above $40, a level it has only flirted with once since the markets broke down in March, while the US Dollar and Gold both rose in value. Treasury yield volatility, a key driver of the cost of rate caps and swaptions, fell through the week.

US economic data surprise to the upside. Citigroup’s economic surprise index surged to a record as US economic data have generally beaten expectations in recent weeks. The standout release of the week was in retail sales, which rose 17.7% above last month’s number, a rise that was more than double the forecast. It seems that consumers returned to stores with a vengeance, propelled by pent-up demand amid easing lockdown measures. Another eye-opener was the Philadelphia manufacturing survey, which came in at 27.5 in June versus expectations of -20. The more upbeat data is allowing the White House and the Senate to proceed more slowly toward a fourth economic rescue package than they otherwise might have.

Our take: The strength in retail sales was surprising, given the economy has only partially reopened. While encouraging, it is important to keep the positive data in perspective. Despite the sharp rebound, retail sales remain more than 8% below pre-virus levels. It will take some time for activity to return to the trend seen before the pandemic, once the Fed’s and Congress’s stimulus support to individuals and businesses fades going into the second half of the year. Get comfortable with economic uncertainty – it will be with us for a long while yet. Strength in retail sales – a key metric of the strength of the almighty consumer, who’s responsible for 70% of US economic activity –  will likely fade before the virus does.

COVID-19 flare-ups seen around world. Beijing is under partial lockdown amid a renewed outbreak of the virus. Schools and universities are closed, and travel in and out of the Chinese capital has been curtailed. Elsewhere, Brazil and India continue to struggle to control the spread of the illness.  In the US, an uptick in cases and hospitalizations has been reported in some states, such as Texas, Arizona and California. Apple Inc. highlighted the pitfalls the economy faces on Friday, announcing that it is temporarily shutting 11 stores across four states after cases of Covid-19 spiked in some areas.

Why it matters: While economic data reflecting the early stages of reopening point to a potentially quicker and sharper rebound in the second half of the year, the news of new infections is now calling the sustainability of the rebound into question. As stimulus measures from the government begin to ebb (have you spent all your PPP money yet? Probably.), the outlook becomes even more cloudy. All told, it tells us that a quick recovery is unlikely, and the road ahead will be bumpy.

Jobless claims slow to improve. Folks filing for unemployment benefits – our favorite gauge of where we are at economically at the moment – trended only slightly lower last week, a decrease of just 58K from the prior week. The reading came in 218k higher than what was expected and stands in sharp contrast to the overtly positive retail sales and manufacturing data mentioned above. It tells us that layoffs are still massive, and that any recovery in the state of the jobs market is a long way off. In the near term, any improvement in the labor market will depend on the economy successfully reopening. Again, as the boost of stimulus to individuals and businesses ebbs and the White House and Congress slow walk new rounds of stimulus, we doubt there will be great improvement on the jobs front anytime soon.

Fed to Congress: Extend stimulus. Chair Jerome Powell testified to Congress on Wednesday, stating that  the economy appears to be at the beginning of a recovery phase, while also acknowledging that the central bank’s visions of improving growth in the second half of the year don’t assume a renewed series of shutdowns.  Powell pledged flexibility and a willingness to revise the terms of the Fed’s various stimulus programs, as needed. The Fed Chair urged lawmakers to increase fiscal assistance, saying direct support can make a critical difference in limiting long-term economic damage.

What to Watch This Week: Given the contradicting signals emerging from recent economic data, specifically retail sales, and jobless claims, it is becoming increasingly clear that we’re experiencing only a gradual return to normal levels of activity.  In addition, the recent acceleration in Covid-19 cases in several states raises significant concerns about the speed and resilience of the recovery.

It’s a scenario that implies that more fiscal stimulus – like an expansion of the PPP program or additional direct payments to citizens – will be essential for longer than Congress originally anticipated. The dynamic will become especially pressing as the July 31st cut-off date of the existing stimulus steadily drifts closer and the $600 per week ‘bonus’ for the unemployed stops. As such, markets will be on high alert in the coming days for any signal from lawmakers on how much and to what extent they are willing to extend lifelines to struggling businesses and the millions of unemployed.

Friday’s May personal income and spending report will be the key data release to watch this week: first, the income data will be informative about the extent of a comeback in paychecks and whether it is strong enough for the Fed or Congress to start tapering stimulus. Second, considering a strong rebound in retail sales, the data will reveal whether spending on services is catching up with spending on goods. And third, the vigor of the economic outlook will significantly depend on how much the personal savings rate normalizes – implying more spending by consumers –  following an unprecedented spike during the pandemic.

Alternative data – pulled from mobile devices typically – is becoming increasingly important in gauging the strength of the recovery. Measurements of the flow of people, like dinner reservations and the use of public transportation, are becoming more critical as the country plans travel and celebrations for the 4th of July holiday.

Big Picture: The rise in Treasury yields seen early this month was swiftly undercut by risk-on sentiment, spurred on by signs of progress in the reopening of businesses around the country and a positive turnaround in economic data. That’s all changed now as the economic data has become more mixed, and reports of spikes in Covid-19 cases in first-mover states have crept into the news headlines, relegating yields back into their familiar ranges.

The journey back to life as usual is what we are all fixated on right now. As news of a spike of new infections sullies positive economic data and clouds the outlook, we expect yields to trade sideways in their current ranges until things become clearer. That will happen either via an announcement of a new round of fiscal or Fed stimulus, a sharp drop in the number of infections, or an overwhelming number of positive data indicators. Until then, the sustainability of the recovery will remain an open question. 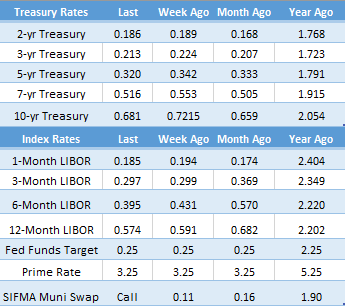 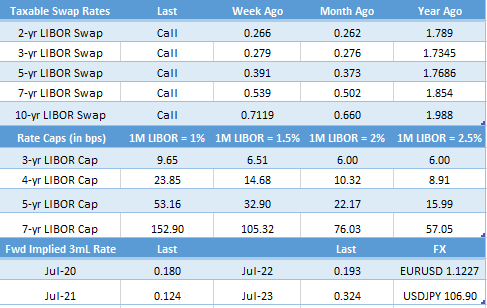 Positive Data is Not What it Seems
Scroll to top