Last Week: Interest rates and equities both ground lower on rising unemployment and renewed tensions between the US and China, which overwhelmed hopes of renewed fiscal stimulus and a vaccine. US 10-year Treasury note yield fell to 0.59%, its lowest ever weekly close. Stripping out inflation, the real 10-year Treasury yield wrapped the week at -0.91%. One-month LIBOR followed the 10-year, edging slightly lower on the week to 0.17%. The price of a barrel of West Texas Intermediate crude oil rose slightly to $41.13 and the US Dollar weakened, and Gold strengthened.  Treasury yield volatility, a significant driver of the cost of rate caps and swaptions, fell throughout the week.

US unemployment picture darkened.  The fast-evolving nature of the virus has rendered the normally tried-and-true monthly gauges of the health of America’s economy nearly useless. As such, we have been watching more high-frequency readings for clues of where we are headed economically, specifically weekly jobless claims. Even though jobless claims have remained above one million for 18 weeks now, last week’s reading of 1.4 million newly jobless paints a worsening picture and snapped a 15-week streak of declines. The data confirmed that the labor market will struggle through August at the least.

Despite the high daily levels of infections, there appears to be a growing consensus and “depoliticization” that masks and social distancing work.  And a vaccine now seems more achievable by the end of 2020 and or early 2021.  Any clear sign the virus is under control and a vaccine is on the horizon should be enough to lift consumer confidence even if the unemployment rate is elevated.

Why you should care: The fiscal response to the Covid-19 recession is running out of steam just as the rising virus case count and disruptions in state reopening plans crimp the economic recovery. The jobless claims reading reinforces the high stakes nature of Congress’s negotiations this week over extending aid to individuals and businesses, specifically the enhanced jobless benefits due to expire this week. A range of other programs – like mortgage forbearance and a pause in student loan payments – will also need to be expanded and extended if policy is to avoid swinging from recovery driver to recessionary drag. While the political debate will be cantankerous no doubt, we expect the urgency of the moment and the approaching Presidential election will drive an agreement within the next two weeks, the package will just be less generous this time around. Keep reading for more detail.

Simmering US – China tensions could drive rates lower. The US ordered China to close its consulate in Houston, prompting Beijing to retaliate by revoking the license of the US consulate general in the southwestern Chinese city of Chengdu. A US Department of State spokesperson said the decision to close the consulate was made to protect American intellectual property and the private information of American citizens. The US Department of Justice recently accused two Chinese nationals of stealing trade secrets and hacking into the computer systems of firms working on the COVID-19 vaccine. The US also sought to block shipments of semiconductors from global chipmakers to Huawei Technologies.

What it means for interest rates: While some suggest the ratcheting tit-for-tat between the two powerhouses could risk destroying the two countries’ phase one trade deal, we doubt it is in danger – yet. China’s revoking of the US consulate license in Chengdu is seen as a minor move when much more impactful actions – like closing the US Hong Kong-Macau consulate in Hong Kong – as much more damaging.  Should the phase one trade deal eventually fall apart, rates could fall even lower than they are now as investors seek the safety of US Treasuries, overwhelming the pandemic’s overt influence on rates over the past several months. In the meantime, we’re on high alert for any signs that the White House is adopting a more aggressive posture against Beijing ahead of the November election.

Inverse relationship between Gold and rates solidified. Deepening negative real yields in US Treasuries are fueling a frenetic rally in gold that is boosting the yellow metal toward records. Gold bullion has gained 22% this year and is close to an all-time high. With five-year Treasuries now yielding -1.15% once the effects of inflation are stripped out, a seven-year low, there’s little reason to expect a slowdown in the relentless demand for the perceived safety from turmoil that gold provides. The weakness of the economic recovery, prospects for further outbreaks of Covid-19 and the impact of central bank bond buying are fueling investor’s search for investments that won’t lose value, and Gold fits the bill perfectly. Need another indicator of where rates could be headed through the rest of the year? Watch gold. Now you know why we always include the price of Gold in the first paragraph of DL Monitor. Ignore its price movements at your peril.

What to Watch This Week: All eyes will be on Congress, the President and the Fed this week, as each forges its path forward in the midst of an economic recovery that’s close to stall speed.

For Congress and the President, we expect a $1- trillion+ phase four stimulus package to come to fruition, with a less generous add-on unemployment benefit of $400 or less per week. However, should Congress and the President dilly dally, even a short delay of critical support to individuals and businesses into early August would damage the recent green shoots in consumer spending and confidence, placing the nascent economic rebound in jeopardy. Occurring at a time when broadening virus outbreaks already threaten the employment outlook, the negative consequences of a delay would be magnified. Let’s hope they get it done.

For the Fed, which meets for its scheduled monetary policy meeting this week, the dark cloud of heightened economic and fiscal uncertainty enveloping us all and the Fed’s massive actions to date to confront it, will prevent any new Fed actions this time around. We expect the Fed’s take-away message will be that it’s “all-in” and that it remains concerned about Covid-19’s effects and stalling economic growth in the second half of the year.

On the data front, we’ll get the first look at Q2 real GDP growth (out Thursday), which should show a whopping 33.0% annualized collapse. Elsewhere, consumer confidence (out Tuesday) figures for July will update perceptions of the labor market and consumer income trends. We’ll be scouring the regional data for clues on which areas of the country will recover the fastest.

Big Picture: While this week’s Fed meeting is important, we are looking ahead to September’s Fed policy meeting instead, and the comprehensive set of updated economic projections that come with it, for signals of future fed actions, as the fall will be a better time to link the Fed’s policy course to future states of the economy. At some point in the fall, the Fed is likely to tilt its Treasuries purchases more toward longer-term debt to lower borrowing costs. It would be part of a transition to stimulating the economy through its bond buying, rather than greasing the wheels to ensure the financial markets function smoothly.

In the meantime, we expect rates to stick to their well-worn ranges and the Fed to remain on hold through 2021 until unemployment has returned to the 4-5% range. Only exogenous shocks, like a blow up in US China relations, or an unexpected negative turn in the pandemic will break rates free in the near-term. 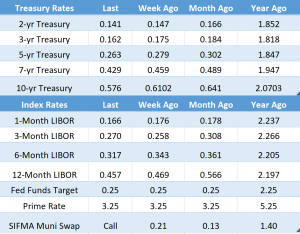 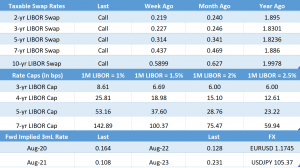 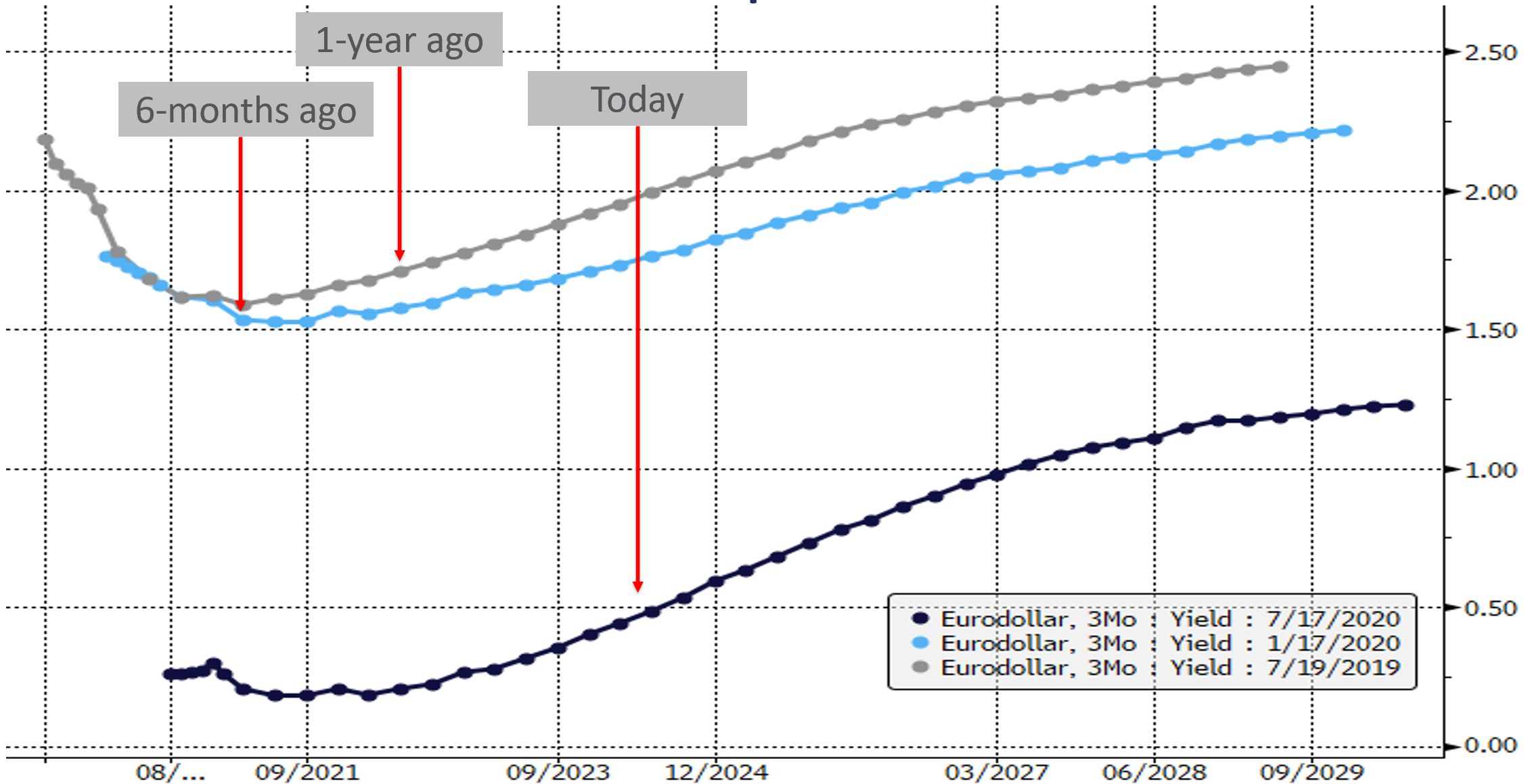