Recession Is Just What We Need 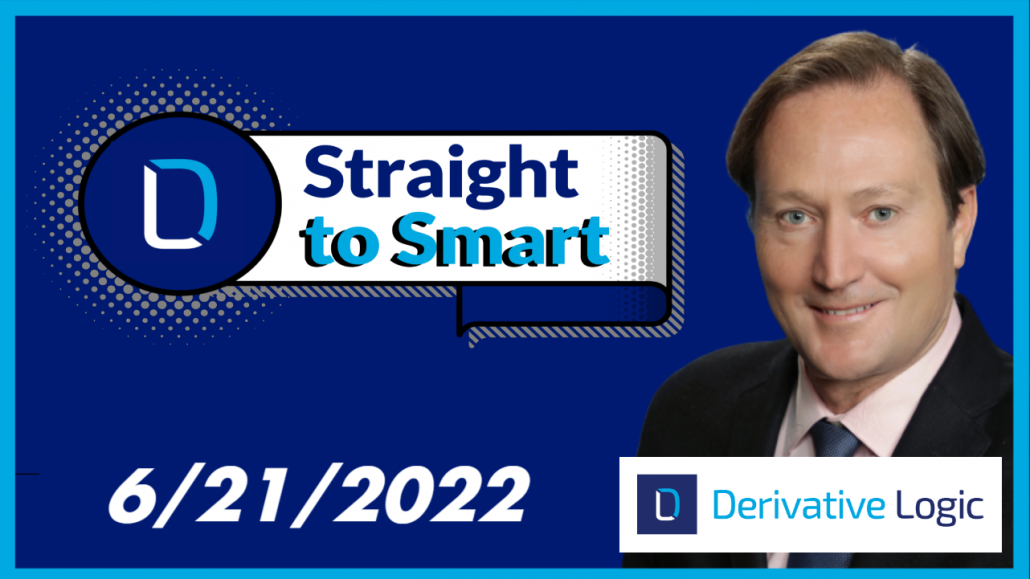 What You Missed: Both short and long-term interest rates rose to multi-year highs, as equities declined on the week, with heightened volatility dominating markets. The yield on the US 10-year Treasury note rose to a nine-year high of 3.47% before backing off to end lower on the week, as markets assessed the Fed’s renewed hawkishness. Short-term interest rates logged similar moves, with the two-, three-, and five-year Treasury yields all rising to multi-year highs intraweek. Elsewhere, the price of a barrel of West Texas Intermediate crude oil declined 8% to $110.27, and the US dollar weakened, and Gold strengthened. Treasury yield volatility, a key driver of the cost of rate caps and other option-based interest rate hedges, fell on the week after peaking near two-year highs mid-week.

Do you have floating rate loans on your assets? Do you also own rate caps? Now’s the time to know where your strike prices are, and for two reasons: 1) If there is any chance that you’ll refinance the floating rate loan soon and then have an “orphaned” rate cap, that rate cap may be worth alot more than you paid for it, and you may want to consider selling it. 2) If your floating rate loan is Agency (Freddie Mac), and you closed the loan two or three years ago, your replacement cap escrow has likely gone through the roof or will very soon. Contact us for a blueprint on what to do next.

Fed quickened its hiking pace while pledging that there’s more to come. In a widely expected move, the Fed hiked its Fed funds target range by 0.75% last Friday, the largest rate increase in 28 years, in response to stronger-than-expected reads on inflation. In its meeting statement, the Fed omitted an earlier reference that it expects the jobs market will remain robust, signaling a willingness to tolerate higher unemployment to quickly bring inflation under control.

Looking ahead, Fed Chair Powell said the committee is likely to raise rates by 0.50% or 0.75% at its July meeting, aiming to push the Fed funds rate into restrictive territory by the end of the year. The Fed’s refreshed economic projections shed light on how it expects growth to slow and the unemployment rate to rise as they continue to hike rates: The Fed’s voting members raised their forecasts for the year-end fed funds rate dramatically – from the 1.9% forecast seen back in March to a median 3.4% – implying that we’ll see another 1.75% of tightening this year. Showing that it now sees a much bumpier soft landing than previously expected, the Fed now forecasts that the unemployment rate will rise from 3.7% at year’s end to 4.1% in 2024; economic growth forecasts were cut to 1.7% in 2022 and 2023, from 2.8% and 2.2% back in March. Fed officials still expect inflation to moderate significantly in 2023. Finally, the Fed reiterated the plan to shrink its balance sheet by $47.5 billion a month, stepping up to $95 billion in September.

Our take: Slammed by critics for not anticipating the fastest rise in inflation in four decades and then for being too slow to respond to it, the Fed came out swinging last week. It admitted, in no uncertain terms, that it has an inflation problem, and is prepared to hike rates aggressively to eliminate it, even if that means higher unemployment.

The billion-dollar question now: Just how much will the Fed hike? That depends on the path of inflation, and on Fed members’ views on monetary policy. While Chair Powell avoided discussing where the Fed funds “neutral” rate lies – the level that neither constrains nor propels economic activity –  it seems that most Fed members believe that holding the Fed funds rate slightly above neutral is just the remedy needed to exert sufficient downward pressure on inflation.

While there is more than one path the Fed can take to get the Fed funds rate to its seemingly desired 3.4% by the end of the year, we think the Fed’s most likely route is for another 0.50% hike in July, a 0.50% hike in September, and a real possibility of 0.25% hikes in both November and December. The fly in the rosé? The US economy is already slowing; the Atlanta Fed expects economic growth to be 0% in Q2. Assuming the Fed sticks to its guns and continues down the hiking path, it will be hiking aggressively into a sharp economic slowdown. That tells us that it will stop short of the 1.75% in additional rate hikes this year, perhaps hiking only 1% more before pausing to assess the broad economic recession that’s likely to unfold over the coming quarters.

Other central banks joined the Fed’s inflation fight – should you care? The European Central Bank (ECB) held an emergency meeting in response to widening spreads between yields on bonds in countries at Europe’s core, such as Germany, and those on its periphery, such as Italy. The expression of concern by the ECB eased market fears that looming rate hikes and the end of quantitative easing will lead to further fragmentation in the European bond markets.

Elsewhere, the Bank of England (BoE) raised rates for the fifth straight meeting, bringing the bank rate up to 1.25%. Further hikes are expected despite a sharp slowdown in growth in the UK as consumers struggle with surging food and energy costs. Switzerland surprised markets by raising rates for the first time since 2007, as Taiwan and Hungary also hiked rates last week. The moves turned focus to the Bank of Japan (BoJ), the other major central bank with exceptionally loose monetary policy. Unlike other central banks, which are tightening policy, the BOJ held rates steady and reaffirmed its commitment to cap 10-year Japanese government bond yields at 0.25%. With global interest rates surging, the BOJ has been the outlier, maintaining its super-loose monetary policy, which has led to a dramatic weakening of the yen. Why it matters: The mostly united inflation-fighting front among the world’s leading central banks creates a tailwind for the Fed to continue down the hiking path without fear of disrupting the global economy in the process.

Economic data confirms slowdown fears – do they imply that a recession is around the corner? Retail sales fell 0.3% in May, weaker than the consensus estimate of a 0.1% gain. Together with May’s elevated read on inflation, the weak result means inflation-adjusted retail sales may have fallen about 1.4% in the month. The April-May average is tracking at an annualized decline of nearly 2% versus the Q1 average. As retailers start receiving large shipments of goods that were in high demand during Covid lockdowns, there will be stronger incentive to cut prices as demand moderates. That will likely keep overall retail spending under pressure in the months ahead.

Elsewhere, Industrial production advanced 0.2% in May – vs. 1.4% prior – weaker than the 0.4% consensus estimate. The slowdown in factory output in May highlights the Fed’s difficult balancing act as it aims to tamp down demand pressures to align them with restricted supply. If factories pull back on production plans amid economic uncertainty, it will take longer for goods inflation to calm down.

All told, while the data don’t imply a recession is looming, economic growth is indeed slowing as consumers – whose spending habits drive 70% of US economic activity – are consistently scaling back on their purchases.  Slowing factory output (lower supply) will aid in keeping prices elevated, further exacerbating a fall in consumer spending.

What to Watch This Week: Data on tap in the week ahead will shed more light on the recession question. Are we already in one? We doubt it.

A common misunderstanding is that two quarters of negative GDP growth defines a recession, although the National Bureau of Economic Research group, who dates economic cycles, begs to differ. According to them, when a recession begins and ends is more nuanced: a recession is defined as a “significant drop in economic activity that is spread across the economy and lasts more than a few months,”. One of the hallmarks of a recession is widespread job losses, which are plainly not occurring right now. Initial unemployment claims (Thursday) have been rising recently, but they’re likely still at levels consistent with a growing economy. The May retail sales surprise, cited above, mostly reflects spending on goods, and may not accurately reflect the underlying condition of demand in America’s services-oriented economy.

Regardless, additional signals of cooling are emerging, particularly in the housing market. Existing home sales (Tuesday) are expected to show another drop in demand in May driven by rising mortgage rates. With the 30-year fixed mortgage rate now approaching 6%, we likely haven’t seen the last of it. The latest gauge of consumers’ thoughts on the future (University of Michigan consumer sentiment index, Fri.), traditionally a respectable predicter of economic downturns, will lend further insight into how things will unfold in the coming weeks.

What happens to inflation and financial conditions over the next two weeks will have a big impact on what the Fed does at its next meeting on July 27th, and, by extension, on whether a recession unfolds. If gas prices continue to rise, the Fed may opt for another 0.75% rate hike in July. If that happens, the Fed will likely have overshot the optimum level of the fed funds rate, increasing the risk of a recession substantially.

Big Picture: Given events over the last few weeks, the future is becoming clearer; either entrenched inflation or a protracted recession is on the horizon for the global economy. Let’s take a thirty-second look at the dynamics shaping the outcome.

Now that pretty much everyone believes that inflation isn’t transitory, the question is when it will revert to more normal levels. The current spate of inflation that we’re all enjoying is supply-driven, and the raw-materials price drop required to alleviate it is likely years, not months, away. Given that much of inflation of late is driven by energy costs, its best to peel back the onion on that front a bit.

In the energy sector, there are two primary supply constraints. While US oil prices are high, refinery capacity is proving to be the actual roadblock to reducing on-the-road fuel prices. President Biden has called an emergency meeting with refiners to discuss the situation. While the move is primarily political, the reality is that US refining capacity has decreased in recent years, owing in part to the pandemic, but also to a lack of investment as electric vehicles gain popularity. Reversing this trend will need both capital and time, with new capacity not expected to be operational until the middle of the decade.

Natural gas has been the bane of the fertilizer business, with production of the energy-intensive agricultural input slowing or ceasing as costs rise. While this capacity can be rapidly restored when natural gas prices fall, the prolonged period of high prices have already resulted in the permanent removal of certain capacity. Farmers, for example, will need to pass through the rising input costs when selling their crops at market. If farmers and ranchers are unable to cover their costs and make a profit, then we’ll lose farms and ranches, reducing overall supply, and the high price spiral will continue.

The sure-fire way to avert this grim inflationary outcome? A deep recession. Demand destruction will solve supply difficulties, but unfortunately, in the most damaging way imaginable for the economy. Assuming the Fed follows the path markets expect, hiking substantially at each of the remaining four policy meetings this year, a recession in late 2022 or early 2023 is inevitable. 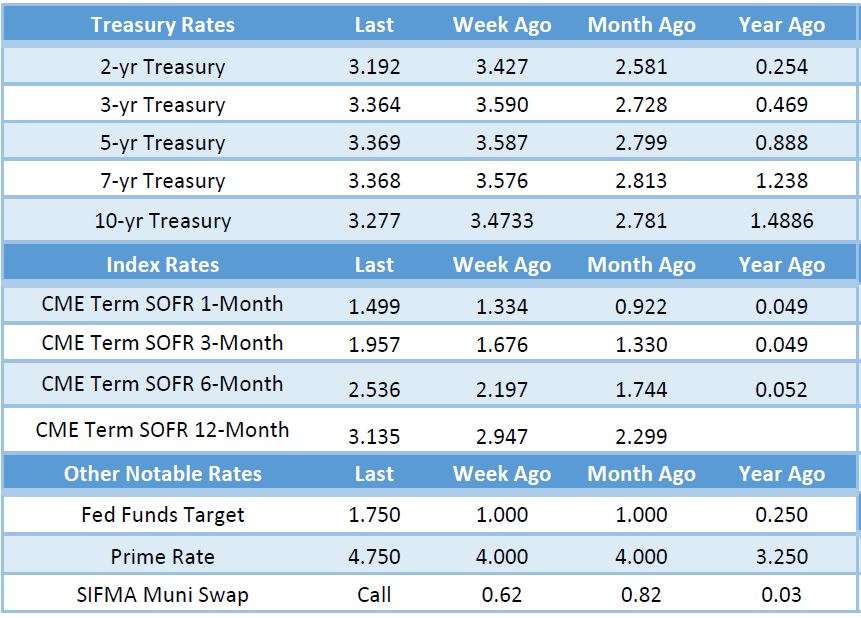 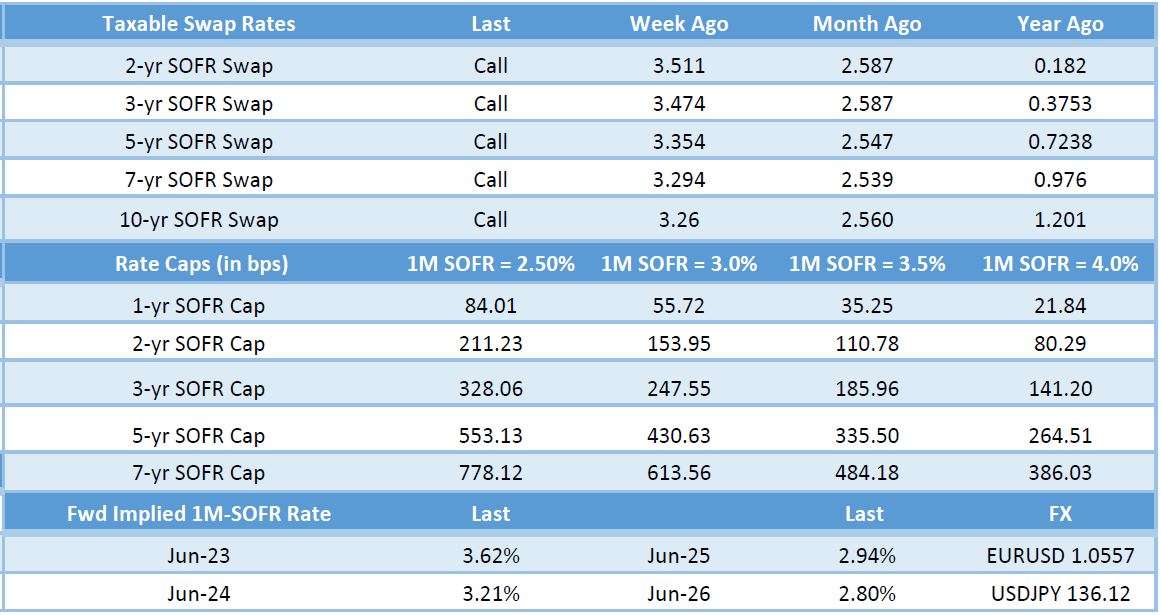 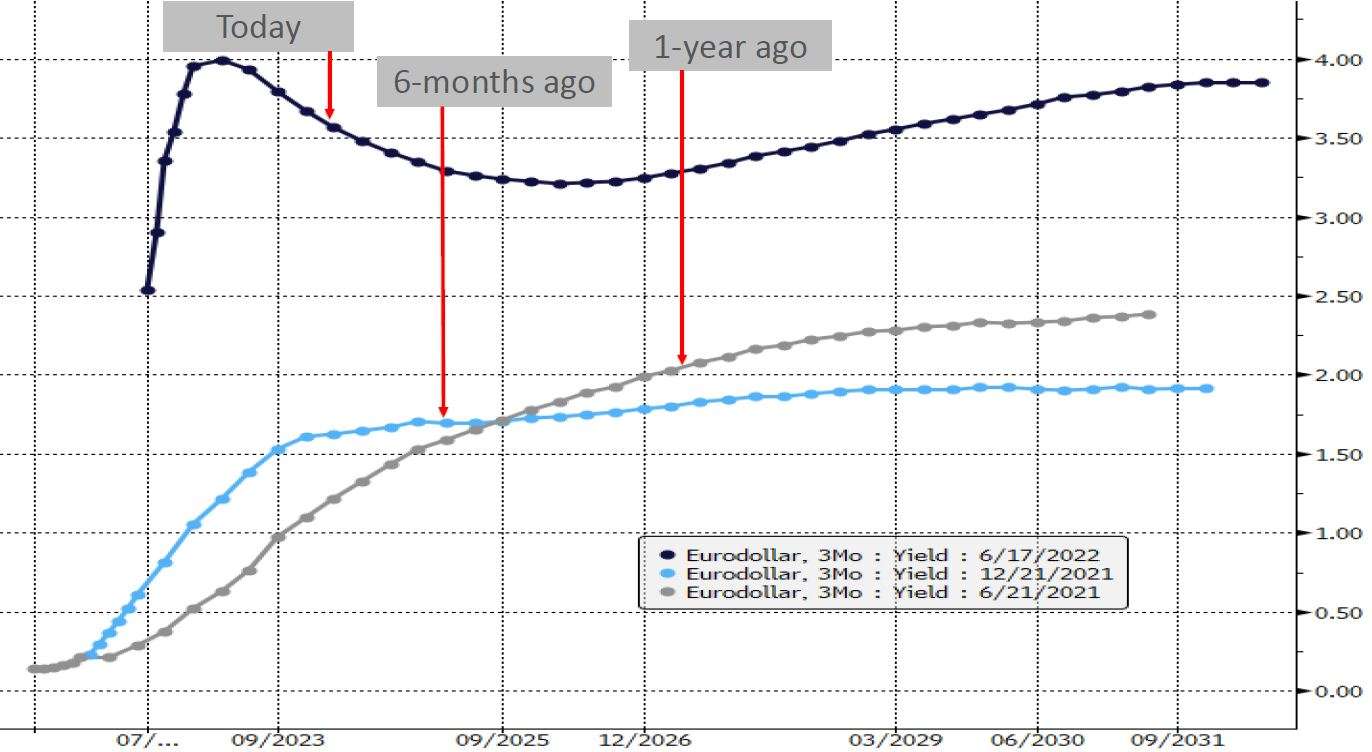 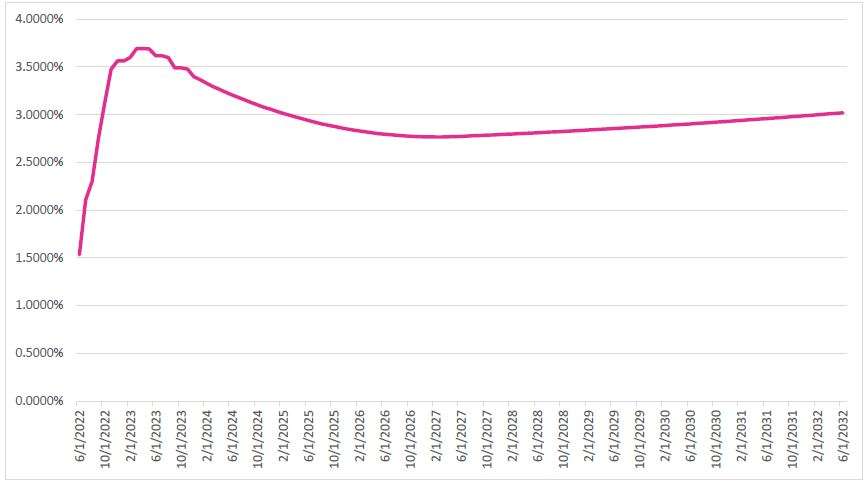 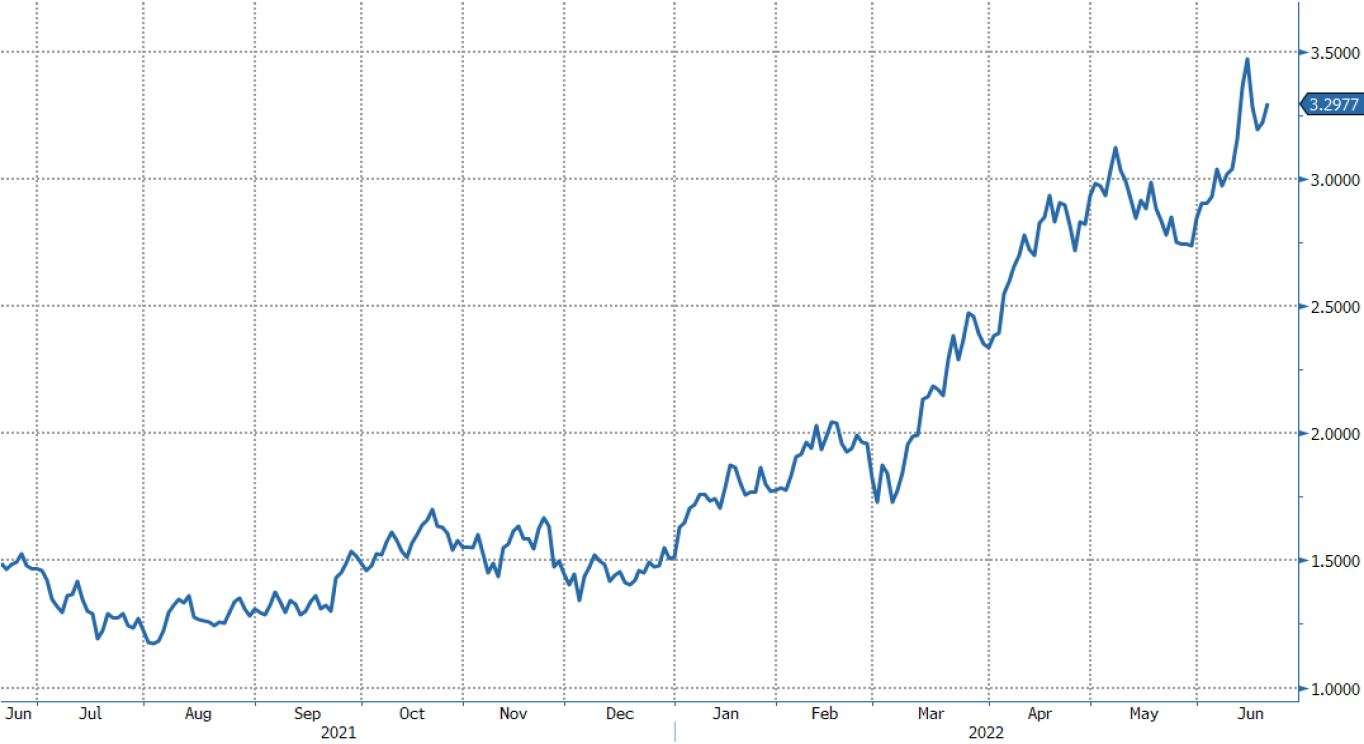 Are We There Yet? Recession Signals to Watch
Scroll to top