Last Week: Interest rates were mixed and equities were little changed on the week as investors worried that the US economic recovery will lose steam as the number of new COVID-19 cases surges in some of the country’s most populous states. Reflecting the uncertain near-term outlook, the yield on the 10-year Treasury note fell 7 basis points from last week to 0.60%, as 1-month LIBOR rose about a single basis point to wrap the week at 0.18%. The price of a barrel of West Texas Intermediate crude oil fell a dollar to $39 while the US Dollar and Gold both rallied slightly. Treasury yield volatility, a key component of the cost of rate caps and swaptions, tumbled.

US Consumers became spooked as COVID cases spike. A continued surge in new COVID-19 cases in America’s three most populous states, California, Texas, and Florida, is the central focus for rates at present, having raised concerns that the already fragile economic recovery may be beginning to sputter. High-frequency data such as credit card usage, mobility indices and retail foot traffic all indicate that consumers have grown more cautious in the last week.

Meanwhile, the reopening process has been paused or totally reversed in roughly 30 states which account for about 60% of US gross domestic product. To top it off, an income cliff of sorts awaits the recently unemployed: the $600/week Federally enhanced unemployment benefit many are enjoying will expire at the end of the month, forcing most to suddenly begin to feel the economic brunt of the crisis for the first time. Congress is on recess until July 20th, leaving only a narrow window to negotiate additional economic aid. The surprisingly positive employment number might delay any immediate relief. The trillion-dollar question now: Will Congress get it done? We think so, but continued support for the unemployed will likely take a different form. How about a signing bonus from the Federal government for getting a new job instead of a fat weekly unemployment check? Just a thought.

Our take: Stimulus checks and enhanced unemployment benefits have more than covered the unemployed’ s income shortfalls relative to the pre-pandemic trend, while lockdowns impaired households’ ability to spend. Given consumers’ central role in the US economy, accounting for around 70% of economic activity, much will depend on their willingness – not just ability – to spend. One set of data we are watching closely is the consumers savings rate. For some perspective, it stood at 23.2% in May after a nearly 20-point spike to 32.2% in April. The previous peak was 17.3%, reached in 1975. During the Great Recession, it peaked at 7.5%. Weaning consumers off inflated unemployment benefits without strong wage income growth (read: a job) will lower the savings rate in coming months. Where it stabilizes will determine the timing and pace of the economic recovery and the longer-term direction of interest rates. For now, it’s a critical unanswered question.

Economic data becoming stale amid the speed and intensity of the virus recession. As we have been saying for a few weeks now, many traditional economic gauges are out of date before they are even published. Other higher-frequency, alternative data are increasingly being relied upon by markets for clues on what is really happening on the ground. Weekly jobless claims, one of the most useful, have come down, but the pace of declines has slowed. Layoffs remain at extremely elevated levels, a discouraging sign that any jobs recovery may be stalling.

Jobless Claims data in the coming weeks should send a clear signal of whether the recent re-acceleration in virus cases is translating into widespread business closures and a second wave of jobs losses. For now, we’re watching things like  TSA checkpoint travel data to gauge passenger throughout at airports,   restaurant table booking data from OpenTable for signals on how often folks are eating out, MBA’s Weekly Mortgage Applications data for signals of demand for residential mortgages, and mobility data, like the Moovit Public Transit Index for clues on the movements of people via public transportation to tell us the state of the recovery.

Biden outlined economic revitalization plan. Presumptive Democratic presidential nominee Joe Biden outlined a $700 billion economic recovery plan, focusing on a “buy American” economic agenda. The former vice president’s plan includes $400 billion in government purchases of US-made goods and services over four years to revitalize the manufacturing sector and $300 billion in new research and development spending for new technologies and green-energy investments. Biden also struck a hawkish tone toward China in his announcement, saying his administration would take aggressive trade enforcement actions against China. Biden earlier proposed raising the top tax rate on individuals to 39.6% from 37% and the corporate tax rate from 21% to 28%. Surprised? Who’s going to pay for all this stimulus?

Corporate CapEx expected to tumble. Analysts estimate that capital expenditures for large and mid-cap firms will decline 12% this year worldwide, more than during the global financial crisis, when outlays declined 11.3%. Companies in the US specifically are expected to cut capex spending by 22%.

What to Watch This Week: A slate of usually important monthly data on the state of retail sales (out Thursday) and housing starts (out Friday) awaits in the days ahead. Unfortunately, their usefulness is questionable amid the fast-evolving nature of the virus. As such, we’ll mostly ignore it.

Instead, we’re focused on the usually irrelevant Fed Beige Book (out on Wednesday), a weekly compilation of business conditions reported to the Fed districts. The industry anecdotes regarding lost sales, interrupted production, and disrupted supply chains the Beige Book will provide are critical for gauging where things are right now and will be in the days ahead.

Lastly, the University of Michigan’s preliminary reading for July consumer sentiment (out Friday) and the July homebuilders’ optimism gauge (out Thursday) are worth paying attention to. Given the divergence of new virus outbreaks in the Southern and the Western US, the regional breakdown of both consumer and business sentiment measures the data provides should offer a signal of just how uneven the recent economic contraction – and eventual recovery – will be across the regions.

Lastly, given their success in containing the virus spread, the New York Empire and Philly Fed manufacturing surveys for July (out on Wednesday) should continue to paint a bright economic outlook for the northeast.

Big Picture: The 10-year Treasury yield – now holding steady near 0.66% – is barely changed from the end of March, as markets have pounced on any sell-off as a buying opportunity, and the Fed helps keep yields low in general by buying $80 billion a month of Treasuries, a step it took to soothe markets after March’s turmoil. We expect the Fed to continue their purchases through year-end and slowly reduce them into 2021, finally ending them in late 2021 as the economy recovers. Such a persistent force in keeping yields low means that yields will stay at these ultra-low levels for a while yet, as surging infections and moves in some states to pause re-opening efforts force markets to conclude that a revival of the American economy will be slow and fragmented. Financial markets know it, and are perfectly happy keeping rates where they are for now. The burning question now: Could rates move even lower? Given the economic and pandemic dynamics in play now, it’s entirely possible. 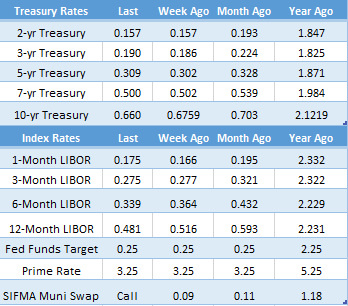 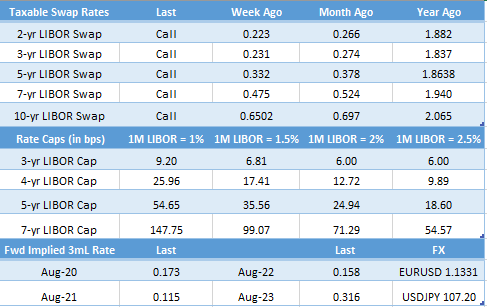 Click here for more DL Reports
Swaps are Back