Repeat After Me – Tapering Isn’t Hiking

What You Missed: Long-term interest rates fell, and equities continued to establish record highs after the Fed announced that it will “taper” aka reduce the pace of its bond-buying program. The yield on the benchmark 10-year US Treasury note decreased to 1.45% from 1.56% while short-term interest rates, where most of the action has been of late, also retreated from multi-month highs. Elsewhere, the price of a barrel of West Texas Intermediate crude oil dropped to $81.27 from $82.26 as the US Dollar treaded water and Gold strengthened. Treasury yield volatility, a key driver of the cost of rate caps and other option-based interest rate derivatives, fell through the week.

Fed gambles on inflation as it waits for more jobs. As part of its scheduled policy meeting, the Fed announced it will begin reducing the pace of its monthly bond purchases later this month, reducing its current $120 billion a month bond buying pace by $15 billion each month – $10 billion in Treasury bonds and $5 billion in mortgage-backed securities. That’s a pace that puts it on track to finish the tapering process by mid-2022, essentially ending its efforts to keep interest rates low by being the bond buyer of last resort.

The Fed altered its view on inflation slightly, acknowledging that price increases have been more rapid and enduring than it had forecast, but still sees the current bout of high prices a “transitory”. Fed Chair Powell said he expects inflation to keep rising as supply issues continue and then start to pull back around the middle of 2022, right about the time the Fed’s tapering efforts conclude. Fed officials don’t envision rate hikes beginning until tapering has ended.

Our take: For the Fed, it’s all about jobs and inflation. Details from last week’s Fed meeting tell us that the Fed won’t entertain interest-rate hikes until the jobs market heals further, even though inflation could run hot for months. The Fed is essentially betting on a forecast that the knots in the port system, overseas production and the job market begin to unravel next year, easing price pressures while ultra-low interest rates continue to stimulate demand. We agree with that view – we’ve held it for weeks now –  and it seems that markets are coming around to it as well. Before last week’s meeting, markets were pricing two Fed hikes next year, one as early as June 2022, and another at year’s end. Those expectations have eased off a bit, with markets now pricing in later rate hikes, the first occurring sometime in Q3 2022.

While inflation has run above the Fed’s 2% target on a 12-month basis every month since early this year, the most likely factor holding back the rate liftoff is a slow recovery in the jobs market. The market is still millions of jobs short of pre-pandemic levels. The employment-population ratio, for example, stands at 58.7% compared to 61% in December 2019. Several more months of this inflation/jobs creation mix could restore companies’ pricing power, which is already apparent on scarce products, and start to spark fears of runaway inflation. All told, the Fed has now created room for an earlier liftoff in rates if inflation is hotter than expected next year, even if the jobs-market recovery lags. We’re expecting at least one Fed 0.25% rate hike next year, sometime in the fall, with another 0.25% hike now possible in December 2022.

America’s jobs engine added more jobs than expected in October. Nonfarm payrolls increased by 531k for the month, compared to the consensus estimate of 450,000. Private payrolls were even stronger, rising 604k as a loss of 73,000 government jobs pulled down the headline number. The unemployment rate dropped to 4.6% (vs. 4.8% prior), or 7.1% (vs. 7.3% prior) if measured with the pre-pandemic participation rate, an adjustment also preferred by the Fed. The participation rate was flat; prime-aged participation picked up a tenth to 81.7%, still a tenth below the level recorded in July-August, and the 82.9% posted in February 2020. Rising wages, the essential counter to high and rising inflation, also accelerated to 4.9%.

Our take: The latest jobs reading is solid and a significant improvement from the last two months. The unemployment rate inched down, and wages continued to climb. That checks the boxes to indicate progress toward the Fed’s lowered bar for “maximum employment”, which recognizes that participation rates may not return to their pre-pandemic level by mid-2022, and when it’s planned tapering efforts are set to end.

While solid, 531k in new jobs is still far below what was expected just a few months ago and tells us that, despite recent declines in Covid caseloads and the expiration of pandemic unemployment benefits, there’s a lingering hesitancy by many about returning to the labor market. Bottom line? Should the jobs/wage picture continue at this pace, the unemployment rate won’t hold the Fed back from lifting rates in 2022, if inflation runs hotter than expected.

China: A case study in stagflation? There are signs of stagflation in China as prices continue to rise and the latest manufacturing data show production slowing. Stagflation occurs when the economy is simultaneously experiencing stagnant activity and accelerating inflation. The phenomenon was first recognized in the 1970s, when an oil shock prompted an extended period of higher prices but sharply falling GDP growth.

An official survey released on Sunday showed China’s factory activity contracted more than expected in October, shrinking for a second straight month. In contrast, their output price index has risen to the highest level since it was published in 2016. Why it matters: China’s rapid economic ascendance – and robust appetite for buying and holding US treasury bonds –  over recent decades has served to help keep US interest rates and prices for goods low. If China’ stumbles, we will feel it.

What to Watch This Week: With the jobs market recovery seemingly back on track, attention now focuses on the Fed’s other mandate, keeping inflation in check. This week’s release of the Consumer Price Index (CPI) data will provide a good reading of the recent pace of inflation. We expect the CPI (Wednesday) to show price pressures running at the hottest pace in three decades. The worry is that these higher prices will sour the consumer mood into the holiday season.

Driving the higher prices for consumers are seemingly unrelenting supply-chain bottlenecks as well as higher energy and other raw material prices. We’ll also get a sense of where those are via the Producer Price Index (PPI, Tuesday). We suspect red-hot price levels,  which likely won’t top out until early next year. The CPI and PPI mix will vex the Fed, but the composition of the higher prices we’re all seeing – bottlenecks and energy prices – will  embolden the Fed’s “inflation is temporary” view, as the sources of upward price pressure are from “transitory“ sources. Countering that interpretation, a key feature of the last CPI reading, for September, was a quicker pace of inflation in non-reopening categories, like housing costs, which tend to take longer to show up and longer to dissipate.

Elsewhere, job openings and quits (Friday), which the Fed uses to evaluate labor-market tightness, likely will show employers having difficulty filling positions amid strong demand for labor (jobless claims, Wednesday). As a result, businesses likely will have to raise wages further to incentivize job seekers (National Federation of Independent Business, a gauge of small business optimism, Tuesday), with potential for a pass through of those higher costs to consumers (Consumer Sentiment, Friday).

Big Picture: Despite a decline in yields across the Treasury yield curve following the jobs report, economic data on whole tell us we’ll see higher interest rates through year end. Solid job creation, a drop in the unemployment rate to 4.6%, falling COVID infection rates, the passage of President Biden’s public works bill, and the end of enhanced federal employment benefits could set up the jobs market for rapid improvement in the coming months.

With inflation already running hot, and expected to do so for a while longer, yields have room to move higher. How much higher? Don’t get too excited; we believe that we could see the 10-year Treasury yield near 1.75% at year’s end, and for the shorter end of the curve trending higher as well, with the real juicing of yields not seen until mid-2022. 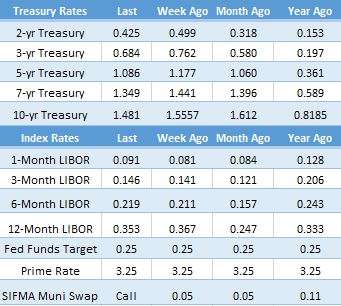 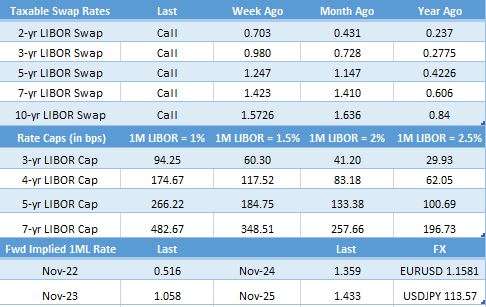 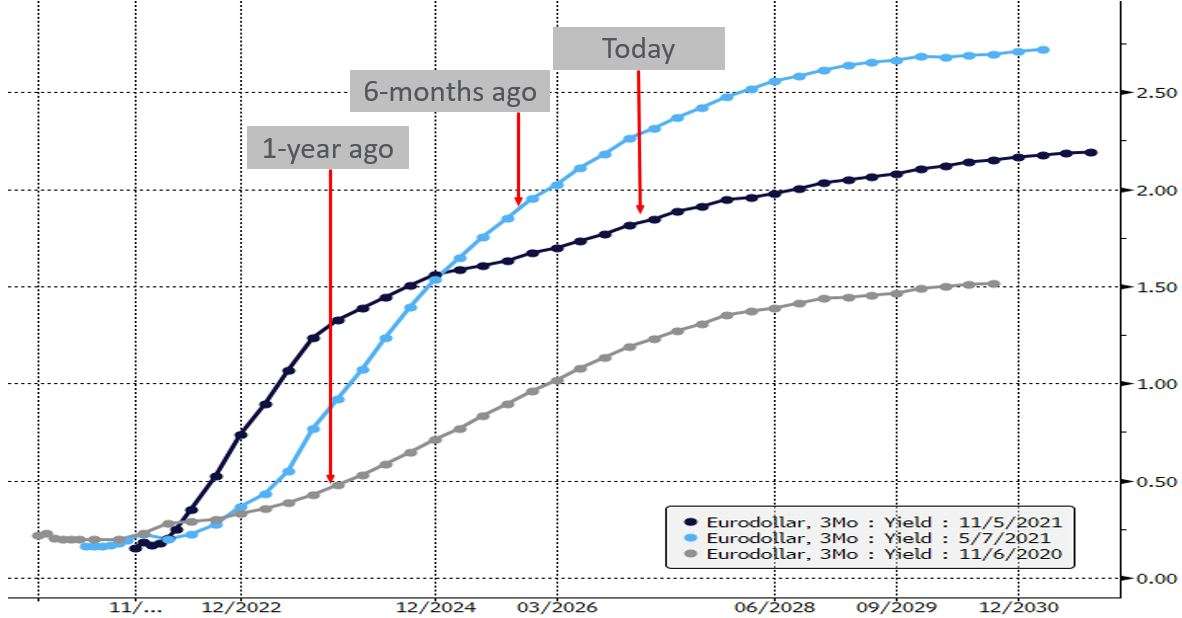 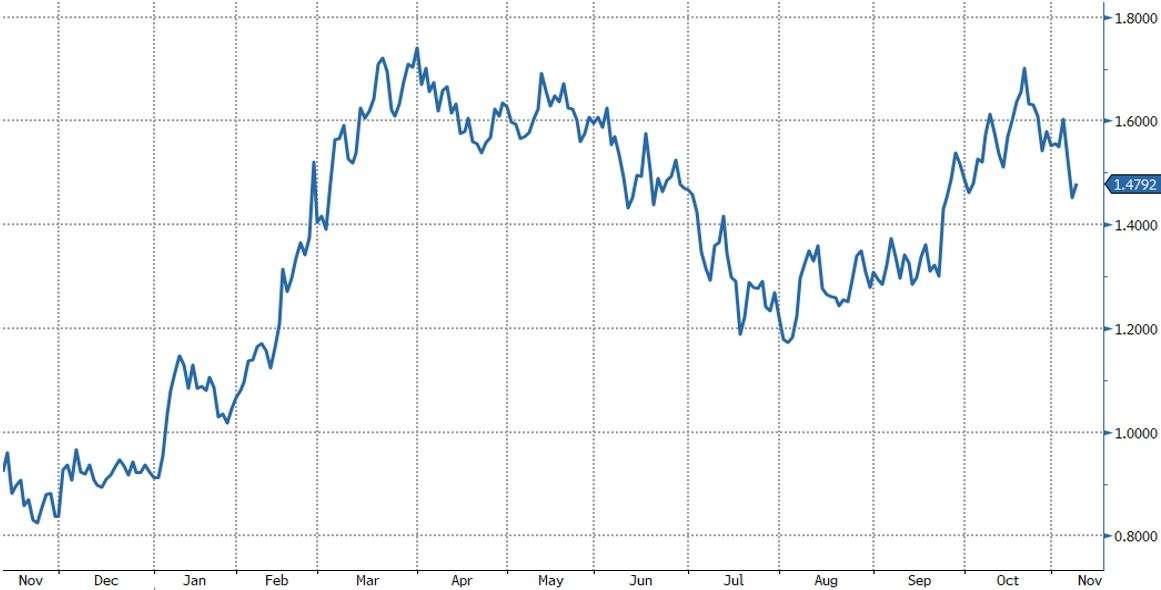 The Grinch Arrived Early This Year
Scroll to top