Last Week: Interest rates fell, and global equities were little changed on the week. The yield on the benchmark 10-year US Treasury note declined to 0.53%, a record low close, as investors sought safety amid intense negotiations by Congress over extending aid to individuals and businesses. US 10-year real yields, which strip out inflation, set a record low of -1.03%. One-month LIBOR followed suit, grinding lower by two basis points to wrap the week at 0.15%. The price of a barrel of West Texas Intermediate crude oil declined to $40 from just above $41 a week ago, as the US Dollar eked out a small gain and Gold climbed to a record high. Treasury yield volatility, a key driver of the cost of rate caps and swaptions, ground lower throughout the week.

Economic impact of lockdowns was ugly, but in line with expectations. Quarterly growth in the US slumped at an annualized rate of 32.9%, and though eye catching, was near what economists had forecasted. A pullback in spending by consumers was the largest negative contributor to growth, responsible for two-thirds of the total decline. The annualized figure shows how much the economy would shrink if Q2’s pace of contraction lasted a year, which thankfully won’t happen. With GDP down 10.6% from Q4 2019 through Q2 2020 in actual terms, last week’s data showed the economy is in a hole more than twice as deep as it was following the great financial crisis, when GDP declined by just 4% from peak to trough. For added perspective, Q2’s dive was the largest quarterly decline using the current methodology and the fourth worst since 1900. Two quarters during the Great Depression, the first quarter of 1946 as the US was demobilizing after World War II and a quarter in 1921, were worse.

Our take: Q2’s GDP data will be a permanent record of the pandemic’s economic low point, showing that personal spending, which makes up about two-thirds of GDP, slumped the most on record. Business investment in structures, equipment and intellectual property saw the steepest slide since 1952, while residential investment dropped the most since 1980. It all underscores the unprecedented scale of the Covid-19 economic downturn and the urgency for Congress to act to extend aid to individuals and businesses and with many benefits expiring last Friday, to do so pronto. Consumers fragile spending patterns paired with an income cliff mean extending some sort of outsized unemployment benefit is critical to the economic recovery. Without it, the green shoots of recovery we are starting to see will be scorched, plain and simple.

Jobless claims are still the gauge to watch. Jobless claims rose for a second consecutive week, although by less than expected. The prior week marked the first increase since late March, suggesting that rising virus cases and disruptions in state reopening plans will weigh on any real improvement in the jobs market in the coming weeks. The fresh job losses were particularly visible in California, the most populous state, reflecting renewed shutdowns and job losses. The worsening jobs outlook implies that even though Q3 GDP could show a sharp initial rebound and give the appearance of a strong recovery, the gains could be short-lived. The triple whammy of 1) the fear factor from Covid-19 on the rise and how its changing people’s behavior, 2) growing signs of rising unemployment as states reverse course on their reopenings, and 3) the income squeeze from now expired federal unemployment benefits place weekly jobless claims as the key statistic to watch for a near real-time pulse of the recovery and future Fed actions. Ignore jobless claims data at your peril.

Fed to the world: Whatever it takes. As widely expected, the Fed’s Federal Open Market Committee (FOMC) unanimously left rates unchanged last Wednesday, highlighting the extraordinarily uncertain economic outlook, which depends almost entirely on how the pandemic evolves going forward. Fed Chair Powell warned that more fiscal support for the economy will be necessary and that high frequency data, like restaurant bookings, air travel and individual movements derived from mobile phone data, all of which had shown strong recovery in May and early June, had started to slow. Powell committed the Fed to using all the tools in its arsenal as long as it takes to steer the economy out of recession.

Our take:  By keeping rates at the zero-lower bound for a considerable time, the Fed is doing what it can. In the end, though, the strength of the recovery will largely depend on containing the coronavirus, and fiscal measures, like extending the Federal unemployment benefit, will provide individuals a necessary bridge over the economic turmoil in the meantime. While the Fed abstained from any policy action last week, it will begin to tie its future actions to the existence of certain economic conditions – like the state of the jobs market – in its September meeting. Specifically, the Fed will likely guide market expectations of future rate moves by making statements like, “The FOMC expects to keep the federal funds rate between 0.00% to 0.25% for at least as long as the unemployment rate remains above 5%”. For us, when thinking about the Fed right now, it’s all about September.

What to Watch this Week: The key economic data releases this week are the ISM manufacturing index on Monday, the ISM non-manufacturing index on Wednesday, and the July jobs report on Friday. On the event front, Fed officials will be out and about ad nauseum, hammering home their “as long as it takes” mantra.

On the surface, the upcoming week’s economic data, including the July jobs report, may paint a picture of ongoing improvement in economic activity following the historic plunge in Q2 GDP. This could create a false sense of comfort and diminish the urgency to implement a new round of fiscal stimulus measures. Do not be fooled; following its initial rebound, the economy is running on fumes and requires more fuel to keep the recovery on track. The epic Q2 GDP plunge, which pushed economic activity more than 10% below its recent peak, cannot be discounted as a thing of the past. It will take years to recuperate from the blow.

In what is historically the single most influential data for interest rates, the July payrolls report covers a period where we saw Covid-19 cases spike anew, an uptick in jobless claims, and a renewed deterioration in consumer sentiment. Regardless of the renewed economic turmoil, we expect that the US economy eked out a gain of 500k in new jobs and that the unemployment fell slightly to 11%. Looking out further, it is likely that we’ll see a loss of jobs in the coming monthly jobs reports, possibly as soon as August.

Big Picture: After a brief period of respite, the economy is at an inflection point. A slowdown in economic activity has occurred in recent weeks due to reaccelerating virus cases. A delay in the next round of fiscal support from Congress and the President will only exacerbate the deterioration. With Democrats and Republicans in Congress far apart in their negotiations, America’s economy is teetering on the edge of the fiscal cliff. Let’s hope they get something done, and fast. If they don’t, expect interest rates to fall anew.

As a direct result of the uncertainty, investors have been pouring into long-dated US Treasuries, driving the 10-year yield to a record low close around 0.53% last Friday. Investors are acting on the growing conviction that the Fed will soon skew its bond-buying program from shorter term Treasury debt, like 2-year Treasuries, to longer term maturities like the 10, 20 and 30-year Treasuries as it shifts its focus from emergency market repairs to resuscitating growth. Why longer-dated Treasuries? They are closely bound to the real economy as benchmarks for mortgages and corporate borrowing, and by increasing its purchases in these maturities, the Fed will help keep borrowing costs low. The result? Anchored or falling yields for the 10, 20 and 30-year.

Remember when we stated that rates could go even lower? Well, that day has arrived. How well are you positioned to capitalize on the move? Don’t get left behind – contact us to learn about the actions you should be taking now. 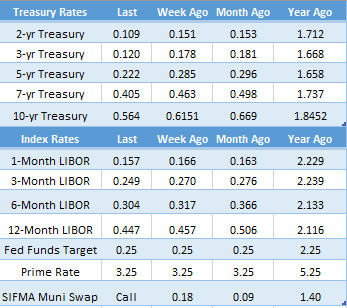 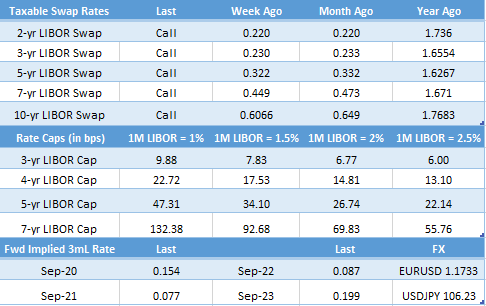 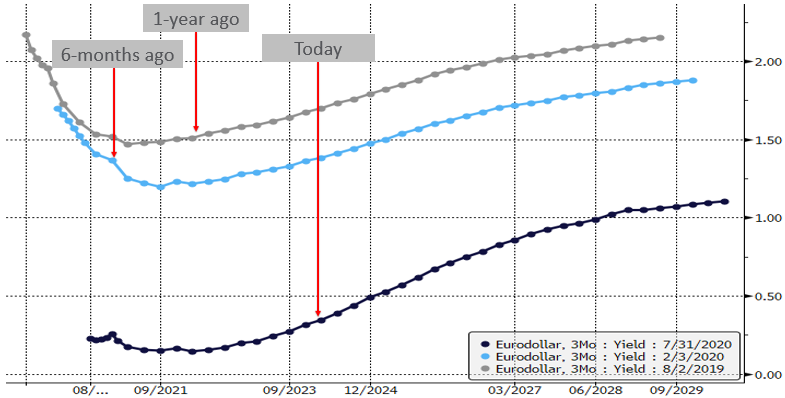 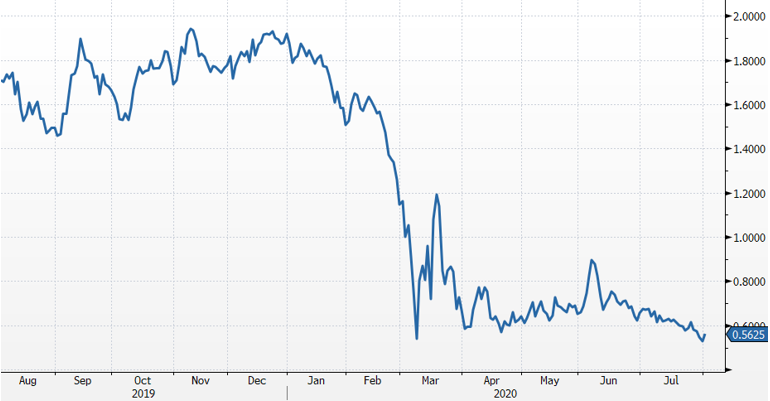