Last Week: Interest rates were mixed and global equities rose modestly as geo-political tensions and solid economic data continued their tug-of-war on markets. The yield on the US 10-year Treasury note rose 3 basis points to 2.86% while 1-month LIBOR fell 1 basis point to 2.069%. Oil fell another $2.50 to $68, as the US Dollar traded flat and Gold fell. Treasury yield volatility, as measured by the Chicago Board Options Exchange Treasury Volatility Index (TYVIX), was little changed at 3.76.

Trump picked a fight with the Fed. The President broke with decades of tradition by commenting on monetary policy, saying he’s not thrilled with the US Federal Reserve’s interest rate hikes, though he acknowledged the Fed’s independence. The president also commented on the value of the dollar, a subject US presidents rarely address publicly, saying the greenback’s strength is putting the United States at a disadvantage. Should the President decide to try and push the Fed around, it will likely prompt it to hike more than it currently plans, as it seeks to prove its political independence.

Fed’s Chair’s testimony to Congress Yielded Little New Info. In two scheduled rounds of testimony, Jerome Powell told lawmakers that the economy is strong and additional rate hikes are likely. For now, we’re sticking to our forecast of two more, 0.25% rate hikes this year, the next in September and the last in December-ish.

Jobless claims fell to lowest level in almost 50 years. Weekly claims for unemployment insurance fell to 207,000, their lowest level since December 1969. Adjusted for the size of the labor force, claims are at their lowest levels in modern history. Despite the news, many economists are on edge, awaiting any signal that trade tensions have delayed firm’s hiring plans or sped up their plans for job cuts.

China using its ace-in-the-hole against US tariffs: Its currency. The Chinese yuan’s recent losses accelerated as trade discord between US and China intensified. Markets regard the willingness of Chinese officials to allow the currency to decline as a measure taken to partially offset the impact of US tariffs (a weaker yuan makes Chinese goods cheaper in competitive global export markets). The yuan has lost about 7.5% of its value versus the dollar since the end of the first quarter, and its recent moves lower put currency markets on edge, as the last time China allowed its currency to weaken – in the summer of 2015 – volatility in financial markets spiked globally. Economic growth in China has slowed, and Chinese officials are under the gun to keep its growth and job creation machine humming so as to orchestrate a “soft landing” for its economy as it cools from decades of insane growth. We think of China as the “bicycle economy”, meaning if it’s leadership doesn’t continue a robust pace of job creation, then it “falls down”, meaning it risks social unrest. Remember the Tiananmen Square protests? It can happen again.

The Trump administration projected a $1 trillion budget deficit next year. Federal spending increases and rising debt service will push the US budget deficit above $1 trillion over the next three years, or roughly 5% of GDP, per the White House. Deficits have exceeded 5% of GDP only twice, in 1983 when the US was recovering from a recession and unemployment exceeded 10%. Similarly, the deficit exceeded 5% from 2009 to 2012, in the wake of the global financial crisis.

What to Watch This Week: With just a few important data releases on tap, and a scant event calendar, the week ahead should be fairly quiet barring some political flare up.

Friday’s release of the first read of Q2 GDP will take the data spotlight, with expectations running high for a 3.8% reading, which, if it comes to fruition, would put expectations for full year growth at 2.9%, placing 2018 as the fastest year of growth thus far in the current 10 years of economic expansion. Yes, we know, GDP near these levels is wonderful, but don’t get too excited, as we expect growth to slow before the end of the year, as this week’s GDP reading reflects a number of one-off factors that won’t be repeated in the second half of the year (seasonality in the data and narrowing of the US trade deficit to name a couple).

Two other sets of data releases warrant your attention in the days ahead: June Durable Goods orders and revisions to July Consumer Sentiment.  Both are expected to show strong readings while markets will be focused on any hint of a dampening of activity driven by trade-war anxieties. We expect both gauges to continue to point toward continued economic growth but wonder about a dynamic that no one is really taking about: If consumer’s wages aren’t rising but consumer spending is growing, how are consumers financing their purchases? The answer: via their savings and taking on new debt. While most consumer’s personal balance sheets look far better than they did before the 2008 financial crises, its a dynamic we’re watching closely.

Lastly, the Fed’s blackout period ahead of the August 1 FOMC decision starts this week. No one expects the Fed to hike next month, but Jerome Powell’s two-day testimony on Capitol Hill last week all but confirmed another 0.25% hike in the fall (September or October), and possibly another in December.

Take-Away: The seeming incessant flattening Treasury yield curve got a refreshing, but likely temporary reprieve last week after President Trump expressed his displeasure with the Fed’s rate hikes. Prior to the President’s comments, the yield curve was steadily marching toward inversion, with the spread between the 2 and 10-year Treasury flattening once again to its narrowest since 2007.

The Treasury yield curve has been on a flattening trend since late 2013, and the trend has sped up over the last couple of years via two contributing forces:  1) sequential Fed hikes and increased issuance of new bonds by the US Treasury puts upward pressure on the short end of the curve, while 2) consistent demand for long-term Treasuries by global investors has kept a lid on long-term Treasury yields.

The financial media’s ubiquitous coverage of the flat yield curve story has implied that once the curve inverts, recession will soon follow. It’s true; history has shown this to be the case in prior events where *sharp* curve flattening led to curve inversion and eventually resulted in an economic recession. While it’s exciting to read all the media coverage, its very important to remember however that a flattening curve is not an inverted curve, and the countdown to recession won’t begin until the curve actually inverts.  We’re not there yet, and it’s possible the Fed will successfully navigate the economy through a couple more years of solid growth without curve inversion. 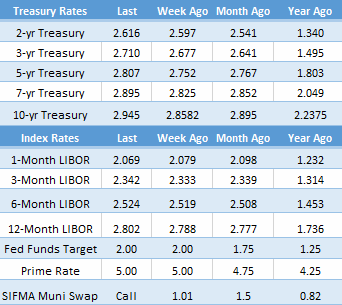 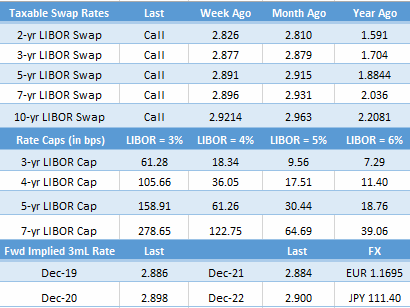 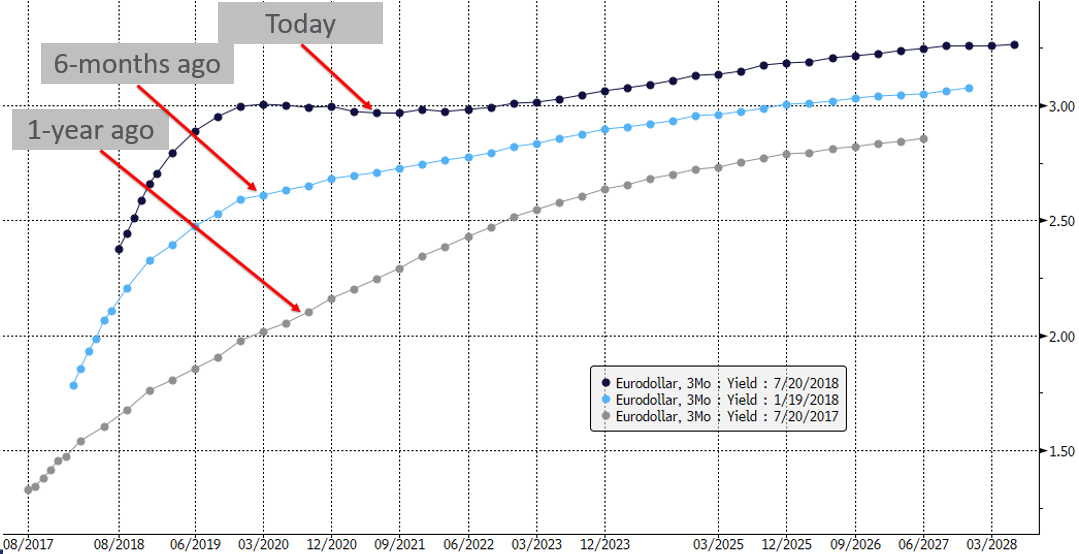 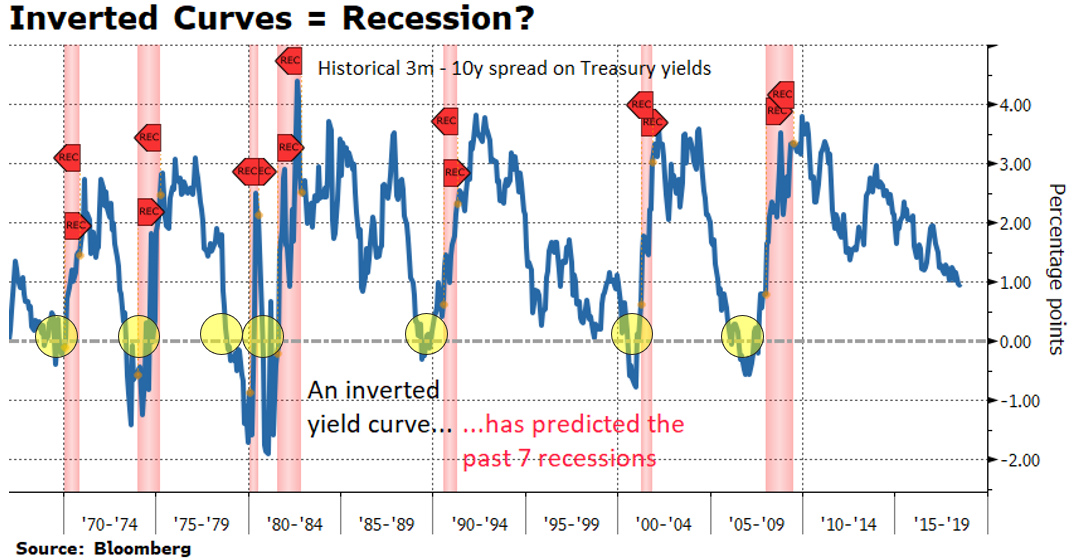