Last Week: Interest rates were mixed, and global equities dipped on the week amid growing trade concerns. Yields on 10-year US Treasury notes fell 5 basis points to 2.85%, while 1-month LIBOR continued its steady ascent higher to 1.8221% from 1.7648% the week prior. Oil was little changed at $61.25, the US Dollar strengthened while Gold weakened. Treasury market volatility, as measured by the Chicago Board Options Exchange Treasury Volatility Index (TYVIX), was also only slightly changed at 4.10.

Soft US retail sales data force a mark-down in US Growth Prospects. A run of softer economic reports, including disappointing February retail sales figures and sluggish home sales, prompted a reduction in growth estimates for Q1 2018. Early in the quarter, growth estimates exceeded 3% on an annualized basis. Recent estimates have slipped just below a 2% growth rate. Sales slipped 0.1% in February, the third consecutive monthly decline. Some see the lull as temporary citing a later than usual tax season because of the passage in December of the Tax Cuts and Jobs Act, which delayed filing for many, consequently delaying refunds.

Confidence in America’s economy abounds. Confidence among US corporate CEOs, small business owners and consumers continues to rise. The Business Roundtable CEO Optimism survey hit a 15-year high this week, while the National Federation of Independent Business’ Small Business Optimism measure hit a 34-year high. Lastly, the University of Michigan Consumer Sentiment Index hit its highest level since 2001. Of the three, the surge in CEO confidence may be the most notable for the next phase of the US growth cycle, given that upbeat CEOs are more likely to approve large investments in capital expenditures. Rising capex tends to eventually filter into increased productivity and, ultimately, higher wages.

President Trump likely to turn up the heat on China trade. Estimates ranging between $30 billion and $60 billion in retaliatory tariffs were floated in the press this week as the Trump administration took aim at the Chinese expropriation of US intellectual property. The tariffs could be imposed in the very near future as a follow-up to a months-long investigation into China’s trade practices. The administration is said to be targeting Chinese technology and telecommunications companies in retaliation for China forcing US companies to transfer intellectual property to China in exchange for access to China’s vast market. While mostly a sleeper issue for markets thus far, a spike in trade tensions could cause interest rates to move suddenly and unexpectedly. As we’ve said before, ignore the ongoing tariff/trade issue at your peril.

European inflation fears abated. Markets expect strong European economic growth to eventually translate into higher inflation across the eurozone. In recent months, the opposite has taken place. Consumer price gains were revised lower to just 1.1% year over year in February. The slowing inflation rate could call into question market anticipation that the European Central Bank will end its quantitative easing program late this year, reduce US inflation pressures as well as erode support for both European and US Treasury bond yields.

What to Watch This Week: Wednesday’s Fed meeting will be the markets primary focus, where the FOMC is broadly expected to hike rates by 0.25%. The meeting comes as two-year yields are their highest in almost a decade, while long-end rates have receded from their 2018 highs. Fed Chair Jerome Powell will make his official FOMC debut in the post-meeting press conference, and although his communication style is more direct than his predecessor Janet Yellen, his message will be the same: the Fed will continue on the path of small, incremental rate hikes so as to avoid snuffing out economic gains stemming from tax reform as well as test the limits of spurring a rebound in job creation, wages and labor-force participation. Based on what we know now, we’re expecting three 0.25% Fed rate hikes in both 2018 and 2019.

On the data front, Friday’s release of February durable goods data will perpetuate America’s “goldilocks” economic theme of sustained growth with nascent inflation pressures. Although consumer spending slowed in Q1, largely the result of an unfortunate combination of bad weather and a slow realization by consumers of the positive effects of income tax cuts, job creation and factory activity is on a solid, accelerating trend. The outlook for consumers, and the broader economy, remains positive for Q2.

Take-Away: In addition to the Fed’s rate decision this week, they’ll also publish an update to their economic projections, which include the infamous Fed “dot-plot”. The dot-plot shows the interest rate projections of the 16 members of the Federal Open Market Committee (FOMC), the Fed’s formal rate-setting body. Each dot represents a member’s view on where the fed funds rate  – the interest rate the Fed changes when it hikes or cuts – should be at the end of the various calendar years shown in the plot. The dot-plot also shows the peak for the fed funds rate after the Fed has finished tightening or “normalizing” policy from its current levels. Oh, and by the way, there’s no way to tell which dot belongs to which FOMC member, so markets don’t have any real sense of how much weight to attach to a dot that’s an outlier with the range for a certain period.  Many in markets expect this week’s dot plot to imply that the Fed will hike four-times this year versus three, and if you watch\listen to the financial news media this week, you’ll be inundated with the three versus four rate hike debate.

We don’t pay the dot-plot much mind, and think that extracting future Fed interest rate decisions from it is an oversimplification of a complex global economy and a Fed that adjusts its policy based on economic trends, inflation, and global events. Regardless of our opinion, markets need any and all information available to trade on, and this week’s revised dot-plot will partially determine whether the rout in shorter-maturity Treasuries will continue, or if yields will plateau for now. Because the markets are well-priced for the Fed’s current slow, incremental rate hike path, this week’s Fed meeting won’t cause yields to change much from prevailing levels. Why should you care about short-term Treasury yields? They are a major determinant of rate cap prices, and the attractiveness of interest rate collars, corridors and swaptions as hedging vehicles. 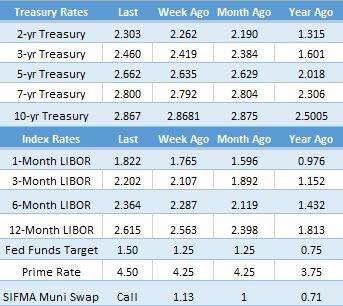 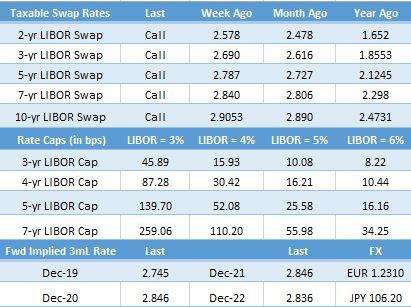 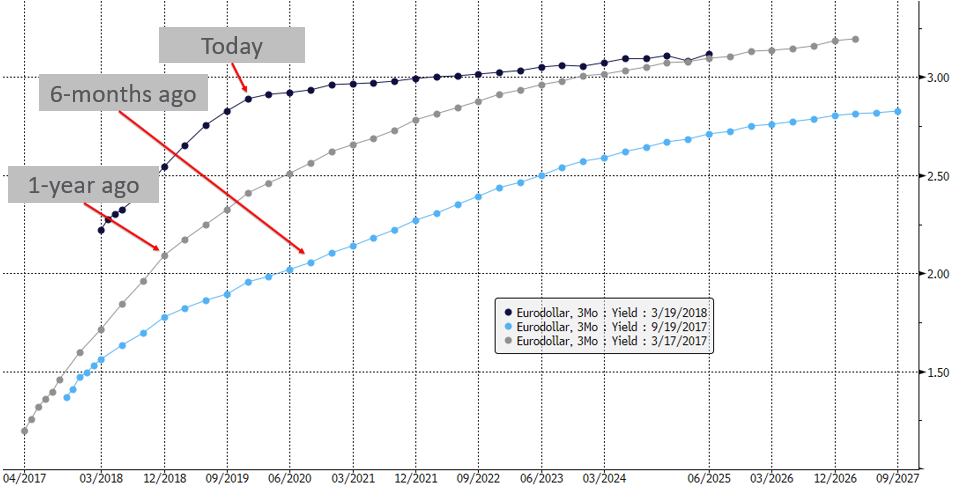 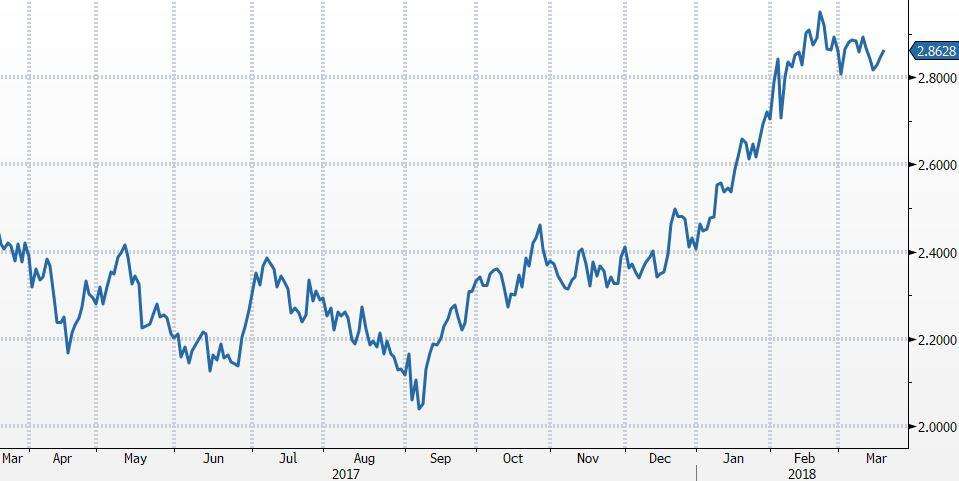 Click here for more DL Reports
Rates are on the Rise: What Smart Borrowers are Doing Now

Trade Tariffs Impact on Rates: A Tempest in a Teapot?
Scroll to top