Last Week: A mostly ho-hum week until Friday’s release of Retail Sales data for April, which showed American consumers shook off the winter doldrums with gusto. Retail sales climbed in April by the most in 13 months, turning a disappointing Q1 on its head. The gain was broad-based, with purchases picking up at auto dealers, apparel stores, furniture outlets and online merchants. While one data point doesn’t mean we’ll see Fed rate hikes in the near future, the data, aided by a better than expected read on manufacturing, showed market players that the Fed  is definitely still in the picture. For the week, the 10-year Treasury traded 5bps lower to 1.700%, while 1-month LIBOR traded lower by 4 bps to .4339%.

This Week: A busy week lies ahead for the US with lots of economic data on tap, capped by the release of Federal Reserve meeting minutes mid-week. Gauges on manufacturing, home building, consumer prices, industrial production and home sales should paint a mostly positive picture of steady economic expansion.

Wednesday’s release of minutes from the Fed’s Apr 26-27 meeting will show the Fed is open to tightening in June, but won’t be enough to change the market’s view that we won’t see a another rate hike this year.

Take Away: The tail end of last week provided a reminder to the market to avoid getting over-confident in the belief of a “do-nothing” Fed through the middle of the year – especially if the capital market’s appetite for risk continues to hold up.

As a result of last week’s Retail Sales positive surprise, markets will become more sensitive to economic data in the weeks ahead, on the lookout for follow-through on what some are seeing as a positive start to Q2, culminating in the reversal of the dismal 0.5% read on Q1 economic growth. Over the course of this week, the focus will be on any other indicators supporting this notion. 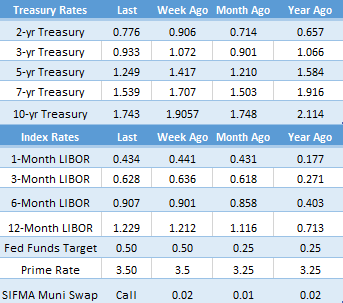 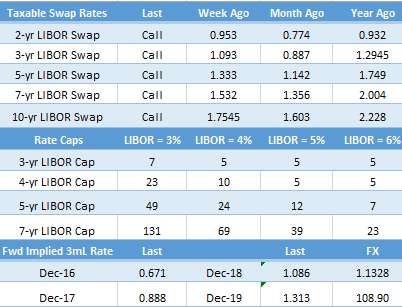