What You Missed: Long-term interest rates fell while equities continued their rise as markets digested a semi-rosy jobs report. The yield on the benchmark US 10-year Treasury note declined to 1.43% from 1.49%, while short-term rates, like 1-month LIBOR, SOFR and BSBY, traded off their lows, but remain anchored near zero. The price of a barrel of West Texas Intermediate crude oil climbed to $75.05, hitting its highest level since 2018, as the US Dollar and Gold both strengthened. Treasury yield volatility, a key driver of the cost of rate caps, swaptions and other option-based interest rate derivatives, fell throughout the week.

June’s Jobs report not as rosy as headlines suggest. The monthly jobs report – historically the single most impactful piece of economic data on interest rates – showed solid hiring progress in June, with 850K in new jobs created, accelerating from 583K in May, and posting the strongest job-creation momentum since August 2020. With revisions, employment in April and May combined was 15k higher than previously reported. A rise in the unemployment rate to 5.9% (vs. prior 5.8%) came despite a stall in labor participation. Adjusted for the overall drop in participation over the course of the pandemic, the jobless rate was steady at 8.4% in June. Finally, consumer wages, a critically important component to the post-pandemic economic recovery, necessary ingredient for sustained inflation, and ultimate driver of higher interest rates, rose 0.3%, in line with expectations.

Our take: As we expected, and helping to sideline the inflation debate, an influx of low-wage workers into the leisure and hospitality sector (343K of June’s 850K new job total) helped hold down growth in wages overall, even as corporate earnings in that sector rose a robust 1.0%. The dynamic confirms upward pressure on wages at the low end of the pay scale, but also shows that higher wages aren’t showing up yet more broadly. For inflation to truly get out of hand on a sustained basis, and for interest rates to rise consistently and stay higher, we’ll need to see broad wage pressures across sectors and pay scales.

Despite the robust 850K in new jobs last month, the post-pandemic jobs recovery poses a conundrum. There is still a yawning 7.5 million shortfall in employment from pre-pandemic levels, but 3.5 million have left the labor force entirely, even while jobs are plentiful, so firms are experiencing unprecedented difficulties hiring workers. With a broader acceleration in economic activity last month and a wave of states ending enhanced unemployment benefits this month, even more improvement on the jobs front are likely around the corner. The big test will be the back-to-school season, and a full end to the unemployment benefits top-up in September. Will the end of enhanced unemployment benefits ease the labor shortage?  Not necessarily because many low wage earners have more opportunities for higher paying jobs with benefits such as child and health care.

In the meantime, the jobs data should be sufficient to give the Fed confidence to move the tapering dialogue forward this summer. The Fed’s required “substantial further progress” in the economy should be much clearer this fall, with an actual reduction in the Fed’s asset purchases to commence in early 2022, and the first rate hike following in early 2023. Until then, expect long-term rates to stay largely range-bound and muted wage gains and steady declines in goods prices to slowly turn down the heat on the inflation debate.

A quick recap of US housing trends. US home prices experienced an annual gain of 14.6% in April, up from a 13.3% increase in March, according to the S&P CoreLogic Case-Shiller National Home Price Index. Charlotte, Cleveland, Dallas, Denver and Seattle saw their largest annual gains. However, according to the Mortgage Bankers Association’s seasonally adjusted index, weekly mortgage demand fell 6.9% for the week, representing the lowest level in almost 18 months. Pending home sales, a measure of signed contracts on existing homes, jumped 8% in May compared with April (a 1% drop was expected), according to the National Association of Realtors. This represents the highest level of sales activity for May since 2005. In June, new listings increased 5.5% year over year and 10.9% compared with May, according to Realtor.com.

Manufacturing gauge implies goods prices will stay red-hot through the summer. The Institute of Supply Management’s ISM index – the key gauge that measures new orders, production, employment, supplier deliveries, and inventories at America’s factories – showed supply constraints remained extreme in June, including those for labor, but details hinted at turning the corner. Delivery delays backed off the highest reading since 1974, as did order backlogs. Yet comments show factories red-lined to meet strong demand last month, signaling a hot summer ahead for goods prices. Optimism remains high, but factories are bemoaning the fact sales could be even stronger. The struggle to meet strong demand emanates mainly from difficulties in hiring and retaining labor, as well as sourcing key inputs.

Our take: As we said last week, consumers, eager to get back to pre-pandemic habits, are set to rotate spending toward services in the remainder of the year, helping supply-constrained goods suppliers to catch up, therefore easing price pressures and making room for inflation to mellow into next year. The expiration of enhanced unemployment benefits in late summer and schools reopening in the fall will only add to the inflation-easing momentum.  Pockets of stimulus-fueled goods demand may take the edge off some categories in the months ahead, but service-sector reopening will create its own supply challenges.

What to Watch This Week:

In a light data week, the key focus in the days ahead will be Wednesday’s release of the minutes of the Fed’s June 16 monetary policy meeting. Every syllable discussing the timing, composition and criteria for the taper will be scrutinized. We suspect the minutes will help flesh out the Fed’s rationale for beginning to “talk about tapering” even as Fed Chair Powell indicated in the post-meeting press conference that the Committee still judged “substantial further progress” as still “a ways off.”

As we’ve said repeatedly, we expect the Fed to begin broadcasting its plans for tapering this fall, commencing actual tapering of its asset purchases in early 2022, and eventually hike rates in early 2023.

On the data front, the key releases this week are the ISM services report on Tuesday, and the jobless claims report on Thursday. For the former, we’ll be searching for detail on whether the sector’s lagged reopening means supply and demand imbalances are intensifying, just as manufacturing pressures began to turn the corner. If so, inflation pressures will continue to run hot through the summer.

There are no speaking engagements from Fed officials this week.

Big Picture: While it’s fun to talk about the details of job growth, wages, inflation, and the like, what it all comes down to is how much or how little these factors are contributing to economic growth. Moderate top-line earnings growth, anemic working hours, and a rise in the unemployment rate suggest that blow out Q2 growth projections are too much. The jobs market is improving, no doubt, but factories struggling to keep up with demand is a constraint on real growth. While higher wages hurts profits, the long-term gain should increase profits because the consumer has more money to spend. With the June ISM showing that factory strains eased only slightly in the month, combined with the consumer’s slow transition from goods toward services spending in the remainder of the year, America’s recovery – and any sustained rise in interest rates – will be slow and bumpy. 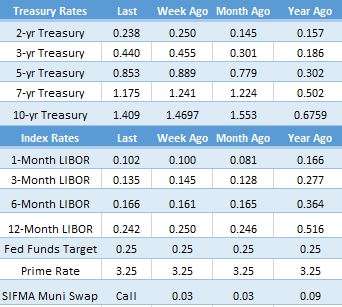 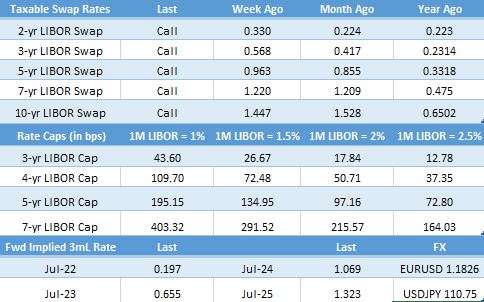 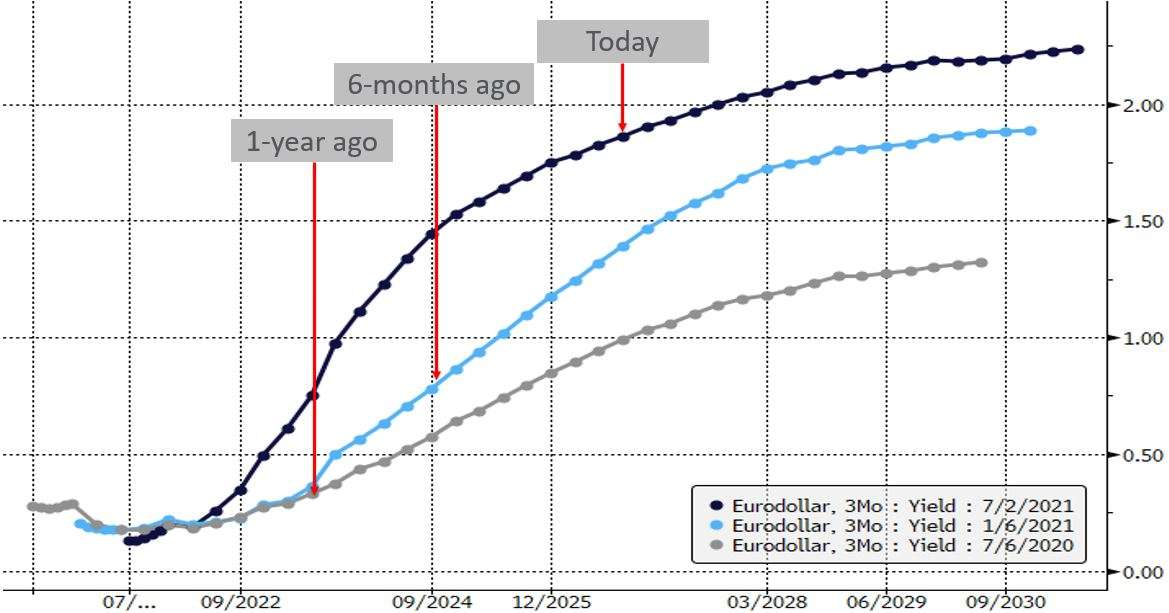 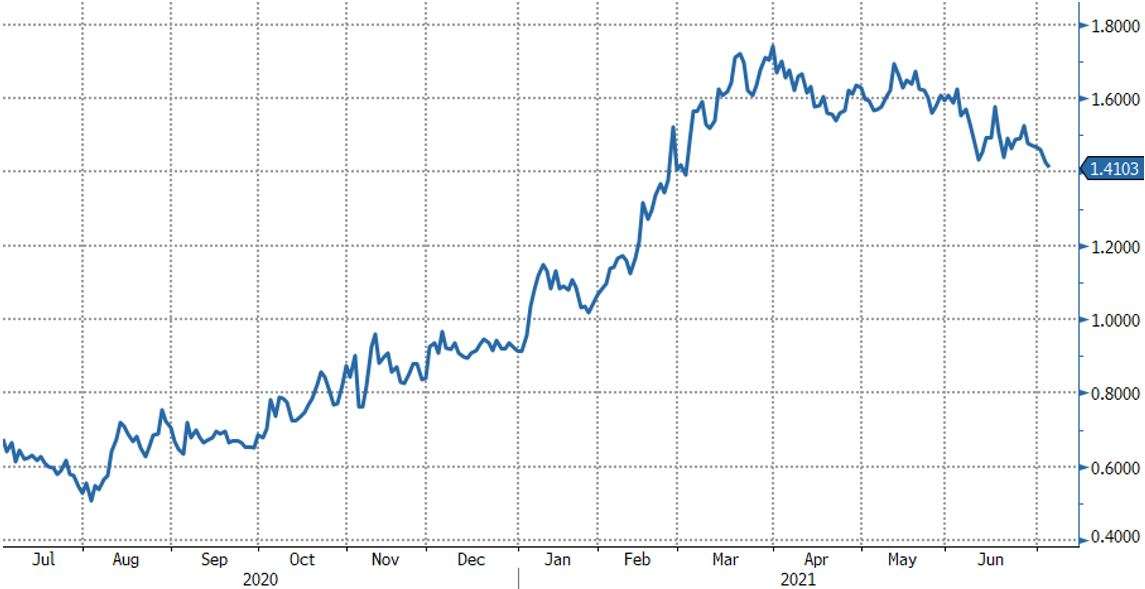 Rates Markets Surrender to the Fed
Scroll to top