Last Week: Interest rates were mixed while equities edged lower on the week. Treasury yields staged their largest one week decline in more than a year on the back of renewed geopolitical jitters, lower energy prices, economic turmoil in emerging markets and more signs the Fed won’t need to take a more aggressive path of rate hikes. The yield on the US 10-year Treasury note sank 13 basis points to 2.93% from 3.08% a week ago, while 1-month LIBOR edged higher to 1.9756%, up from 1.9613% the week prior. Oil fell from $71.35 to $68.75 on talk that OPEC will relax production caps. The US Dollar and Gold strengthened. Treasury market volatility, as measured by the Chicago Board Option Exchange Treasury Volatility Index (TYVIX), declined to 3.81 from 4.10 this time last week.

Fed is likely to maintain its gradual course of rate hikes. As we expected, the minutes of March’s Fed meeting showed that its likely to maintain its slow, methodical and incremental pace of policy tightening. Another quarter-point hike at the June 13th meeting is now widely expected, and at present, it’s also likely the Fed will hike a total of three times this year, not four as some previously forecasted.

Economic data confirmed solid US growth but showed a slowdown in Europe and Japan. While the pace of global growth dipped in Q1, expectations for a rebound in Q2 are looking strained. The US is living up to its solid-growth expectations, but Europe and Japan continue to disappoint, as evidenced by May’s Purchasing Manager Index (PMI), an indicator of the economic health of the manufacturing sector. The PMI, which is a gauge of new factory orders, inventory levels, production, supplier deliveries and the employment environment, is at an 18-month low in Europe and a multi-month low in Japan. The data helped to erode the recent rise in US Treasury yields as global investors moved assets into US Treasuries from their European and Japanese equivalents. Economic trends such as this support our belief that we likely won’t see the US 10-year Treasury yield above 3.50% by years end.

Italian political crises roiled global markets. The country’s political structure is undergoing upheaval, as two competing organizations vie for power. Sparing you the political details, Italian yields have risen sharply in recent sessions as the competing 5-Star Movement and The League battle for control in forming a new government. Markets are concerned that the combination of a rollback of pension reforms, tax cuts and increased social spending could dramatically increase Italy’s budget deficit. The concern now is that Italian bond yields become so high that they become unsustainable and difficult for Italy to finance, and that it could spread to peripheral countries, like Spain. Its an issue that will be with us for months in the future. We’ve already seen the impact the crisis can have on US interest rates, hence ignore it at your peril.

US and China made progress on trade. While stopping short of agreeing to the US demand that China slash its trade surplus by $200 billion, negotiators from the US and China agreed to a framework in which China will increase purchases of US products, strengthen intellectual property protections and improve market access to US companies. The news helped tensions ease further and markets breathed a sigh of relief as a result. While will continue to believe an all-out-trade war between the US and China will be avoided, many details are yet to be worked out.

Trump’s on-again, off-again summit with North Korea. A sudden shift in tone from North Korean officials in recent weeks prompted President Trump to cancel a summit with North Korean Leader Kim Jong Un. The meeting had been scheduled for 12 June in Singapore, as summit preparation talks had broken down, making a successful outcome for the summit unlikely. Differing interpretations over the term “denuclearization” were at the core of the recent uptick in friction between the two sides. As of this morning, the summit appears to be back on, via tweets over the weekend.

What to Watch This Week: The main focus in the days ahead are the first revisions to Q1 GDP, due Wednesday, Personal Income and Spending data – which contain two of the Fed’s favorite inflation gauges –  due Thursday, and Friday’s May jobs report.

While revisions to a previously published US GDP number aren’t usually significant, this week’s second revision to Q1 GDP will contain the first look at economy-wide corporate profits, an important signal as to the vitality of the economy and a harbinger of the corporate sector’s willingness to keep hiring and investing at a healthy pace. It will also serve as a signal into whether the nearly decade-long economic expansion will continue. After stalling in Q4 last year, we’re expecting corporate profits to accelerate over the course of the year along with economic growth. This week’s GDP data will prove we’re right.

Thursday’s Personal Income and Spending data contain two of the Fed’s favorite gauges of inflation: the headline and core PCE deflator. Forget about what PCE stands for, just know that the two gauges are measures of whether inflation is staying near/remaining above the Fed’s much-advertised 2% level, long thought to be a catalyst of more frequent or larger interest rate hikes. The Fed dispelled that notion at its last meeting in March, and this week’s data looks to support the Fed’s slow and incremental approach to rate hikes this year.

Job creation has been volatile in recent months, rising 324K in February only to fall to 134K in March, making it difficult to tell if there’s been a real change in America’s ability to create jobs. With such noisy data, we look to any deviation from the 12-month average of 190K to tell us if its getting better or worse. We expect 200K in new jobs in May, with the unemployment rate staying steady at an ultra-low 3.9%. While it’s fun to predict how many jobs were created, the important piece of the May jobs report will be wages, and if there’s been any real change to the flat trend in wage growth. You’d think that with labor becoming increasingly scarce, wages would have to rise at some point. It’s just not happening yet. Why should you care? Wage increases boost consumer’s confidence in the future and spur them to buy stuff, supporting businesses and nudging inflation higher in the process. Higher inflation warrants continued Fed rate hikes. Will we see any real change in consumer’s wages this time around? We doubt it.

Take-Away: After last week’s fall in Treasury yields across the curve, spurred lower mostly by investors seeking a safe haven from political risks in Italy and Spain, threats of a trade war with China and crises in emerging markets, borrowers are wondering what’s next after believing higher rates were here to stay.

Well, higher rates are here to stay, its just that last week served as a reminder that it’s a big world out there and yields are moved around by more than economic data and speeches by Fed officials. While yields are now back where they were before their big moves higher a few weeks ago, based on another big move lower in the 10-year Treasury yield again this morning, we doubt we’ll see more sizable moves lower any time soon. A steadily growing economy, small but consistent increases in inflation, and a red-hot job market will keep the Fed on a slow and incremental hiking path, supporting yields at the short end of the curve, while the US government’s growing borrowing needs and an eventual calming of the North Korean stance along with an avoidance of a Chinese trade war will support yields at the long end of the curve. The fly in the ointment? Falling oil prices and a spreading of the Italian political crises to other peripheral countries, spurring investors to buy Treasury bonds as a means of seeking a safe-haven. Until then, at some point soon, we’re expecting a resumption in yields slow and steady grind higher, supported by this week’s data showing robust job growth, a small but steady increase in inflation and a rebound in corporate profits. 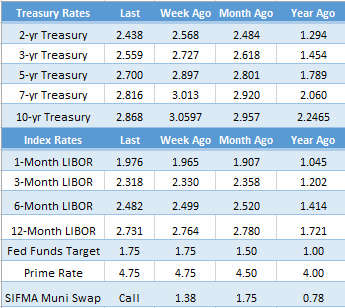 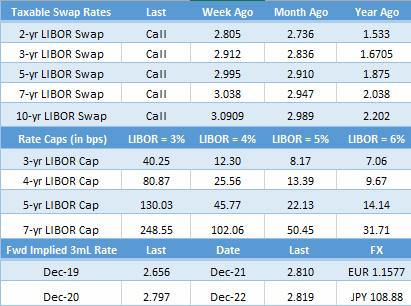 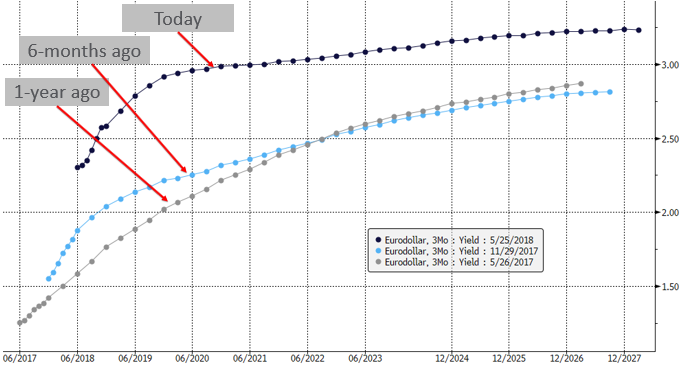 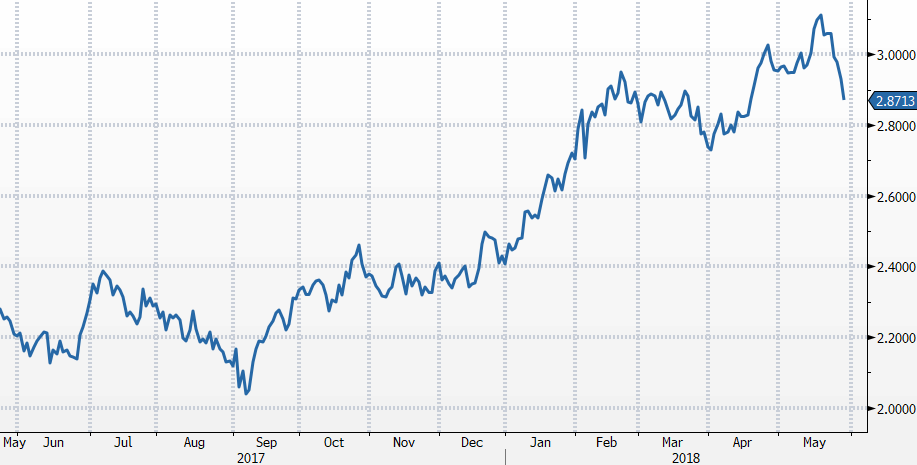 Click here for more DL Reports
Borrowers: The Flat Yield Curve May be Your Friend