Scorching Jobs and Inflation Not Enough?

What You Missed: Long-term interest rates rose, and equities traded near all-time highs as America’s economy continued to show signs of recovery despite the spread of the Delta variant of the coronavirus. US 10-year Treasury yields rebounded from around 1.16%, their lowest level since February, to end the week near 1.30% after strong US employment data. Short-term interest rates, like 1-month LIBOR, SOFR and BSBY also drifted higher, but remained near all-time lows. The price of West Texas Intermediate Crude oil fell about $4 a barrel, to $69.30, while the US Dollar strengthened, and Gold weakened. Treasury yield volatility, a key driver of the cost of rate caps and other option-based interest rate derivatives, drifted lower through the week.

US payrolls soared in July – is a Fed taper around the corner? America’s jobs engine added a stronger-than-forecasted 943k jobs in July, the unemployment rate fell substantially to 5.4% from 5.9%, and wages rose slightly. The monthly payrolls data – the most important for gauging the future direction of interest rates and the reason why we spend so much time analyzing it – for the prior-two-months were upwardly revised by 119k. While certainly impressive, the July data were collected in the middle of the month, suggesting they may not fully reflect the impact of the fast-spreading Delta variant.

Digging deeper into the data, private job growth remained strong (703k) as reopening continued to boost demand for in-person services. It seems that we’re all finally getting out of the house, eating out, and traveling, as the most notable job gains occurred in leisure and hospitality (380k), with two-thirds of those coming in food services and drinking places (253k). While wages rose in certain job types, the predominance of rehiring lower-paid, service-sector workers is restraining a broad, sustained rise in wages across a spectrum of job types – a necessary ingredient for inflation to stick around beyond year-end and to shed its “transitory” label. If you believe that real, sustained inflation is upon us, you may want to reconsider, as underlying data doesn’t quite support that view.

One encouraging signal of underlying strength came from continued gains in professional and business services (60k), an area where new jobs are critical to sustaining any broad jobs recovery. Finally, the headline was significantly lifted by employment in education, with state and local governments adding a combined 231k teachers and school staff amid a distortion in seasonal patterns of staffing fluctuations due to the pandemic, with fewer-than-normal job cuts during the summer.

Our take: One month’s worth of payrolls data doesn’t make a trend, and while encouraging, certainly won’t decide the timing of the Fed’s taper. What the July payrolls data does mean for now, is higher Treasury yields, a slightly steeper yield curve, higher rate cap prices and higher swap rates. After the payroll data’s release, the 10-year yield rose four basis points and the two-year increased one basis point, moves that will likely hold for a while. The data also hasn’t changed our expectations that the Fed will begin to announce its plans for tapering before year’s end and will begin tapering sometime early to mid-next year.  The next Fed signals on that front could come as soon as this month’s Jackson Hole Symposium (Aug 26-28) or during the Fed’s next policy-setting meeting on September 22nd.  While it’s fun to think about, a Fed rate hike is still a long way off; likely in mid-to-late 2023.

Looking ahead, August’s payrolls report will be an interesting one. The looming cessation of Federally enhanced unemployment benefits in early September should drive many of those sitting on the employment sidelines back into the workforce. However, delta variant concerns and their potential to disrupt school reopening plans and returns to the office, will drag on new job creation, likely equating to a fewer new jobs in August than we saw in July.cools due in response to high prices.

Fun fact – German yields turned negative. The ENTIRE German sovereign yield curve, out to 30 years, fell into negative territory, with the 30-year bund showing a -0.027% yield as of this writing. Should you care? Most definitely. While we don’t write about it much, US Treasury yields are influenced by their German counterparts, given that Germany in the largest economy in Europe. With a yield curve that is entirely negative, German bunds are serving as a greater drag on US Treasury yields moving notably higher anytime soon.

What to Watch: With all the attention on one of the Fed’s dual mandates – jobs – now in the rearview mirror temporarily, the focus this week turns to the other one: price stability, aka inflation. The Fed’s favorite inflation gauge, the Consumer Price Index (CPI), will get a refresh this Wednesday.

We expect CPI to show that inflation continues to run hot as supply-demand imbalances and an upward slant to housing costs push the headline number close to 5.4% year-over-year. Price spikes for used cars, travel related services, hotels, and restaurants – segments of industry that are inflated due to the continued emergence from the pandemic and, hence, temporary –  will likely continue to be the drivers. If our expectations on the data are correct, they will continue to also support the Fed’s “inflation is transitory” thesis.

Elsewhere, Tuesday’s NFIB small business survey will shed more light on compensation plans, hiring difficulties and price pressures that small businesses are facing. Also on Tuesday, the comprehensive second-quarter productivity and unit labor costs report should show a gain in the former and moderating growth in the latter. Thursday’s Producer Price Index (PPI), a gauge of inflation faced by businesses, and Friday’s reading on import prices and Consumer Sentiment will likely all show that surging commodity prices and supply bottlenecks continue to translate into pandemic-induced price pressures. It’s all in the midst of rising virus infections from the Delta variant, just as back-to-school efforts become more chaotic than usual.

Big Picture: Despite this week’s focus in inflation, the Fed’s #1 priority remains getting America back to work. Taking a quick peek at its progress toward its goal of “substantial further progress”, and how that progress could translate into the timing of the Fed pulling back the easy-money punch bowl, it appears that we’ll be in the easy-money days for quite a while longer.

As a reference point, let’s look at where the unemployment rate was on the eve of the pandemic, in February 2020, versus where it was in November 2020, when the Fed broadcasted its new “substantial further progress” target. After reaching a 50-year low of 3.5% in February 2020, the unemployment rate spiked to multi-decade highs, then settled to 6.7% in November 2020, a gap of 3.2%. As of July 2021, the gap has now shrunk to 1.9%, making up almost half of the February 2020 versus November 2020 unemployment gap. Since we’re nearly halfway back to February unemployment lows, the trillion-dollar question now is if this improvement would qualify as “substantial” in the Fed’s eyes. While it’s enticing to think so, we think not. America’s job engine will need to produce a million new jobs each month for at least a couple more months to get us closer to the half-way mark, and prompt the Fed to begin taking its foot off of the stimulus gas pedal. That all being said, we’re certainly getting closer to a Fed taper. Worried about being caught off guard? Don’t be; the Fed will go out of its way to over-communicate its taper timetable well ahead of the event. Until then, Treasury yields will remain low. 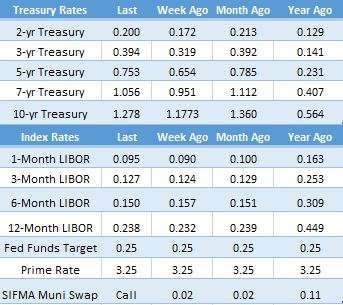 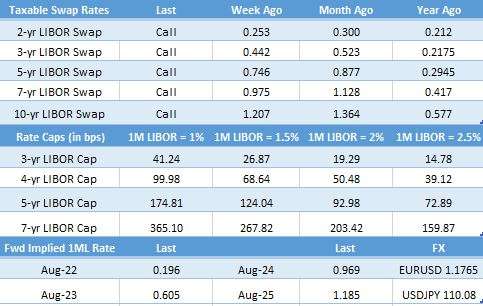 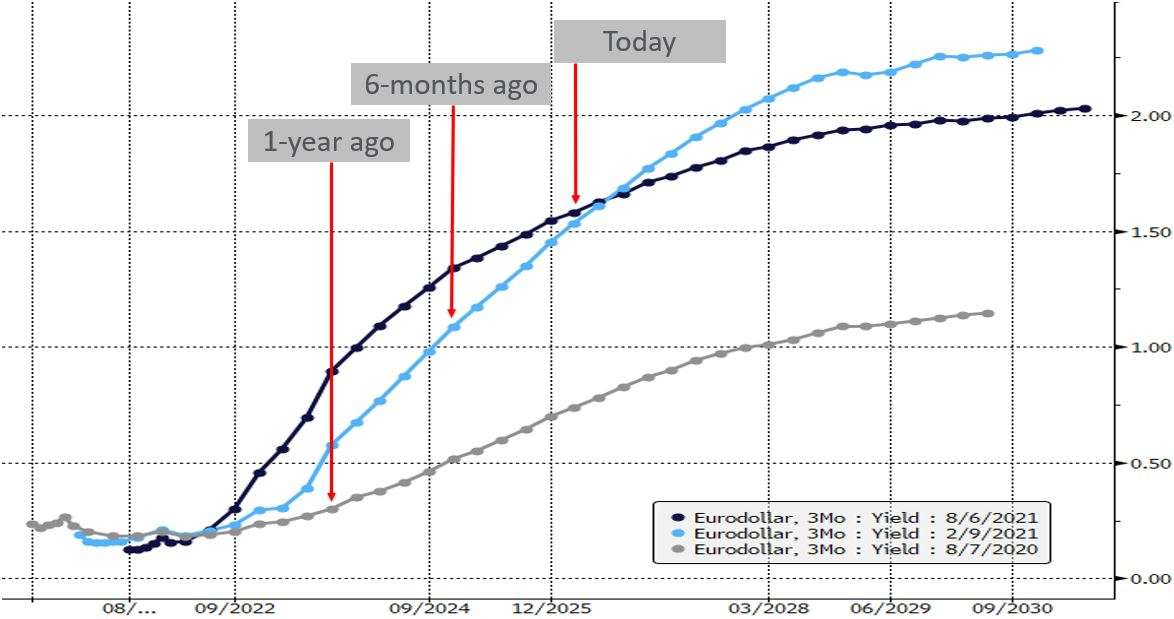 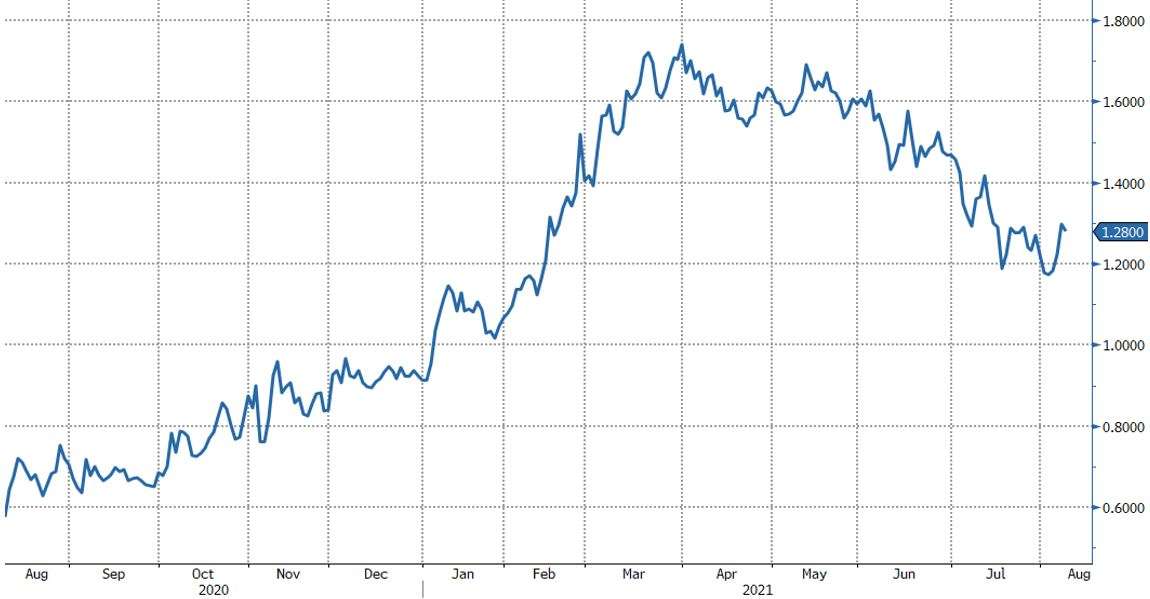 Click here for more DL Reports
I Got a Call – Required Advisor?

Passing of the Inflation Baton?
Scroll to top