Last Week: Interest rates kept to their recent ranges and equities remained flat as markets were kept guessing by America’s trade-related negotiations and emerging market jitters. The US 10-year Treasury note wrapped the week at 2.94%, in the middle of its 2.97% to 2.92% weekly range. 1-month LIBOR continued its slow but steady ascent higher, touching 2.0461%, up from 2.0130% a week ago. Oil declined slightly to $65.80 while the US Dollar weakened and Gold strengthened. Treasury market volatility, as measured by the Chicago Board Options Exchange Treasury Volatility Index (TYVIX), increased to 4.38 from 4.08.

US the odd man out at G7 as trade tensions ratchet higher. The leaders of the Group of Seven large, industrialized countries met in Quebec over the weekend, with trade issues front and center at the gathering. The prime ministers of Germany, the UK, Japan, Canada and France were all united in their opposition to US tariffs. Expectations of any trade breakthrough were already low but deteriorated more than anyone expected as President Trump shocked our allies by disavowing a joint statement minutes after it was published online and lashed out at Canada’s leadership specifically. Increasingly, markets seem to be ignoring trade headlines and justifiably so. Countries are staking out positions on trade and reversing themselves within hours. Last week saw US reversals on several issues, including tariffs on China, with the US now reserving the right to reimpose them. How long can the market calm last? The problem with politically-driven crises is that they are personality-driven and unpredictable. Look for a full analysis of the trade issue and how it could affect interest rates in this month’s DL Report.

US-North Korea talks set for Tuesday. President Trump lowered expectations for a definitive agreement on denuclearization of the Korean peninsula at this initial meeting, saying multiple summits may be necessary to reach an agreement.  On top of the challenge of achieving a positive outcome in the first place, Trump lowered the odds of a successful first meeting even further by disavowing the G7 joint statement. We doubt anything substantial will result from the meeting other than an agreement to meet again. Regardless, ask yourself: If President Trump made a commitment to you, would you believe he’d follow through? Something to contemplate.

More US job openings than jobless workers for first time on record. The US Bureau of Labor Statistics released its Job Openings and Labor Turnover Survey (JOLTS), and for the first time in the survey’s history, there were more job openings in the US than there were jobless workers to fill them. Despite what appears to be little slack in labor markets amid a 3.8% unemployment rate, gains in wages remains muted, with average hourly earnings rising just 2.7% in May. As we’ve said many times before, until the red-hot jobs market translates into meaningful increases in worker’s wages and those higher wages then translate into higher prices in consumer goods prices (aka inflation), the Fed won’t alter its well-publicized path of three more rate hikes this year, at most, the next being this Wednesday.

US growth continues to outpace Europe’s. Purchasing managers’ indices released in recent days show that US growth continues to outstrip Europe’s. The US composite PMI, which includes both the manufacturing and service sectors, rose to 56.6 in May, a big jump from April’s 54.9 reading. Meanwhile, the euro area composite PMI fell to 54.1 in May from 55.1 in April. So far in 2018, US growth has held up relatively well amid a mild slowdown in the pace of global growth. Solid US employment data and robust PMIs give the Fed confidence to continue on its hiking path. The fly in the ointment? The ongoing US vs. The World trade issue, which, should it deteriorate, could change everything. Ignore it at your peril.

What to Watch This Week: The week ahead is one of the most important for the entire year. Five days of presidential standoffs, trade tensions, a data deluge and central bank meetings await, each carrying the potential to set the future direction of interest rates and shape the outlook for global growth in Q2 and beyond.

On the economic front, Wednesday’s Fed meeting will be the primary focus. While everyone knows the Fed will hike by 0.25%, greater attention will be devoted to the official revision to its economic and financial forecasts, the picture they paint of America’s economic future, and the future path of rate hikes the forecasts imply. We’ll be particularly focused on the Fed’s updated inflation outlook, as well as hints at how its balancing the trade-off between tax-cut tailwinds and tariff headwinds. All told, we expect the Fed to continue to forecast a “goldilocks” US economy, one that’s growing in a “not too hot and not too cold” fashion and call for two more hikes this year at most: one in the fall and one near the end of the year. While confident in the current state of the US economy, the Fed is cautious about hiking too much too fast and snuffing out growth ahead of a what will likely be a growth slowdown in 2020-ish.

On the data front, important gauges on consumer inflation, producer prices, industrial production, retail sales and inflation sentiment will lend further support to our view on Fed hikes. Wonder how all the trade tariff banter will manifest in the economy?  One of the first places the trade tariffs will be seen/felt will be in the form of higher producer prices, specifically steel imports, the first industry where tariffs were threatened. While prices for steel imports have moved higher in response to the recent trade restrictions, the full impact of trade tariffs won’t be realized until late summer or fall at the earliest.

On the international front, Tuesday’s Trump-Kim meeting will garner great media attention but will do little to alter markets nor the immediate trajectory of interest rates. Of greater importance is Europe’s and Japan’s central bank meetings, where the former will begin talks about ending stimulus and the latter will stand pat on rates.

Take-Away: In a week filled with reams of economic data, decisions from the world’s biggest central banks and white-knuckle geopolitical events, it will be difficult to separate the signal from the noise. We’ll be focused on Tuesday’s Consumer Price Index – a measure of inflation at the consumer level, and a significant factor the Fed uses in setting monetary policy –  above all else, as it’s the greatest catalyst for any near term move in interest rates. Think about it: the consumer accounts for 75% of US GDP and their confidence in the future stands near its 20-year high. Business spending is also robust, with capital expenditures by the S&P 500 companies tracking at +24% year over year and we’re at nearly full employment. All are factors that should spark inflation – eventually –  and force a reaction from the Fed when it does. 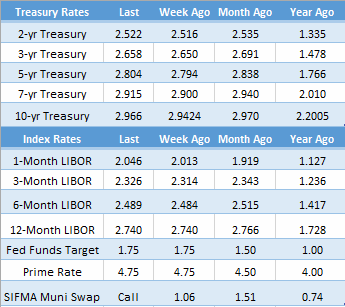 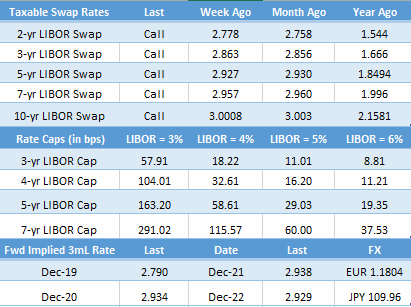 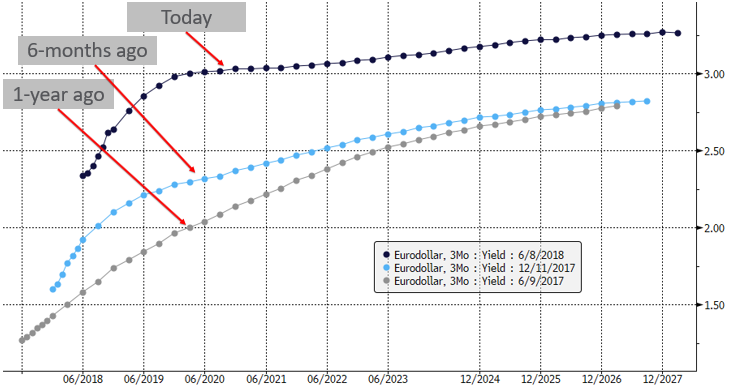