Last Week: After a week without significant drama and a drip of economic data releases that showed weak Q1 consumer spending and GDP growth, ultimately yields remained net lower and flatter. America’s economic performance in Q1 is turning out to be weaker than expected, but we’re skeptical that US economic trends have suddenly weakened substantially, as normally a weak Q1 has generally been followed by a strong Q2 in recent years. Meanwhile, a major loss of economic momentum is not being corroborated by labor market data through the end of March, specifically in jobless claims.

The weekend’s oil ministers meeting in Doha carried great hope for an agreement on the limiting of oil supplies and a resulting rebound in oil prices, but it looks to have been a bust. Oil prices have fallen anew and investors sought out safe havens as a result, forcing the 10-year Treasury yield to give up earlier gains to trade virtually unchanged at 1.7238. 1-month LIBOR traded slightly higher to .4364.

This Week: A quiet week ahead of next week’s April 27 Fed meeting. The market will keep its focus on the global risk backdrop, the next round of corporate earnings and mostly second-tier data releases which will have little impact on Rates.

Take Away: Rates look to be in consolidation mode, barring a sudden equity market slump driven by a fall off in corporate earnings, which we doubt we’ll see given the markets already low expectations. The second trigger is oil. After the failure of the Doha meeting to set supply limits, all eyes will be watching how far below $40/bl Nymex WTI crude will fall, as the long end of the US Treasury curve remains particularly sensitive to any meaningful price swings. Other countries yields are also sensitive to the price of oil, and any surprise declines in foreign yields will definitely add to the Fed’s “global risks” equation to put off any near term rate hike. 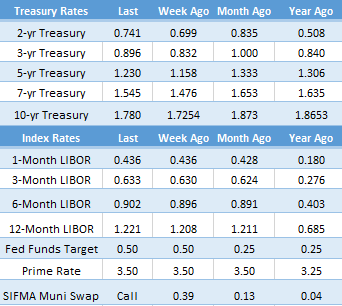 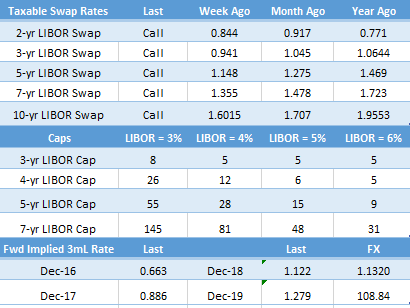