Status Quo Fed Turning Up the Heat on Congress

Last Week: Interest rates and equities both fell on the week as markets drifted amid the fog of the pandemic. The yield on the US Treasury 10-year note traded slightly lower to 0.67%, along with 1-month LIBOR, which wrapped the week barely one basis point lower at 0.15%. The price of a barrel of West Texas Intermediate Crude oil weakened $3 to $37.50 on an expected boost in OPEC production, as the US Dollar traded flat and Gold strengthened. Treasury yield volatility, a key driver of the cost of rate caps and swaptions, drifted lower throughout the week.

European COVID-19 new case count surpasses that in the US. Countries in Western Europe are seeing a jump in new cases of COVID-19. France alone reported more than 10,000 new cases last Thursday while total new cases in Western European countries surpassed those in the US. The increase comes as schools and businesses are attempting to reopen and at a point where governments are weighing the considerable costs of reinstating lockdowns. Given that the virus had a firm footing in Europe well before the US, some look at the recent numbers out of the continent and wonder if the same resurgence could happen here. While the number of cases has been rising of late, hospitalizations and deaths continue to trend lower in both the US and Europe.

Expectations are building for strong US growth bounce before year-end. Strong consumer spending and the rebuilding of depleted inventories are spurring economists to revise their economic recovery forecasts, with new expectations that it will occur faster and sooner. Goldman Sachs recently upped its Q3 forecast to a 35% annual rate, Bank of America revised its view up to 27%, as Bloomberg economists revised this quarter’s growth to 28%, up from their previous estimate of 17%. The Federal Reserve Bank of Atlanta’s GDP Now model forecasts a 30.8% growth rate while the Federal Reserve Bank of New York’s Nowcast predicts a more modest 15.6% rebound. While undoubtedly positive, the faster growth estimates are giving Congress leeway to delay the next round of fiscal stimulus, a propellant likely needed to get us through the “last mile” of the recovery. Read on for more.

Why you should care: Any resurgence in economic activity will incentivize investors to move out of the safety of US Treasury bonds – a dynamic that has kept the 10-, 20- and 30-year Treasury yields low. As the economy recovers, which will happen eventually regardless, the drag on long-term Treasury yields will naturally erode, allowing them to drift higher. The billion-dollar question is when and by how much.

Phase 4 fiscal relief bill failed to advance in Congress. Democratic lawmakers in the US Senate weren’t interested in Majority Leader McConnell’s “skinny” coronavirus relief package worth approximately $500 billion, so a vote requiring 60 votes was dead on arrival last Thursday. Negotiations over a larger package remain stalled, with Republican and Democratic lawmakers nearly $1 trillion apart on the total price tags of their competing proposals. Our take: Congress is running out of time. With the Presidential election just seven weeks away, any further economic aid may have to wait until after the election, stunting the positive momentum a recovering economy could have on the incumbent.

What to Watch: It’s all about Wednesday’s Fed meeting this week. While no one expects any change in policy at this meeting or any meeting until late 2022 at the earliest, the Fed’s recent adoption of a new average inflation targeting framework will dominate. Don’t worry – we won’t get into the wonky details, just know that the Fed is revamping its method of how it will respond – via rate hikes – in the event inflation shows up down the road.  While interesting, no one expects inflation to show up for years, if ever, especially if consumer’s wages remain stagnant as they have for years now. With unemployment high as far as the eye can see, you can count on wages staying low and for inflation to remain muted. Onward…

On the data front, retail sales for August (released Wednesday) will lend the first clues on the state of consumer spending after the $600/week federal top up to unemployment benefits expired, as well as offer insights into the vigor of spending amid the back to school – or lack thereof –  season. Further, surveys of the state of heavy industry (Tuesday) and consumer sentiment (Friday) will provide a peek into how both business and consumer confidence are shaping up. We don’t expect any market moving results from either.

Big Picture: There was plenty to worry about when the Fed last met in late July, with both the resurgence of the virus and the fading of fiscal support from Congress both threatening to derail the economic recovery. But the economy has instead proven more resilient than expected since then, prompting a flurry of calls for a big rebound before year’s end. Equally encouraging for the outlook, signs of long-term damage to the labor market and the business sector appear less severe than initially feared.

As such, the Fed won’t take any new actions when they wrap up a two-day gathering on Wednesday, an outcome likely to crimp inflation expectations and spur investors out of the safety of US Treasury bonds and pave the road for higher long-term yields. Recent projections for the federal funds rate – the rate the Fed shifts when they hike or cut, and a huge influencer on the movements of short-term interest rates like LIBOR and SOFR –  show short-term rates anchored at zero through early 2023.

The fly in the Chardonnay? Should the next round of fiscal stimulus from Congress fall short or be significantly delayed, it will take some of the shine off the pace at which things are getting back to normal. A status quo Fed is turning up the heat on Congress to get something done. Let’s hope there’s some resolution on that front, and soon.

Will the devastating fires in Oregon and California impact the US economy?  As a percentage of total US GDP, California is 14.6% and Oregon around 2.0%. Just a thought. 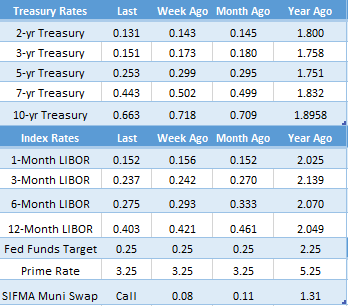 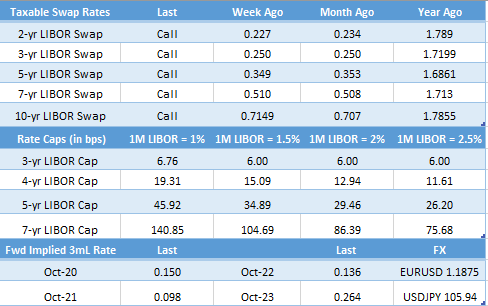 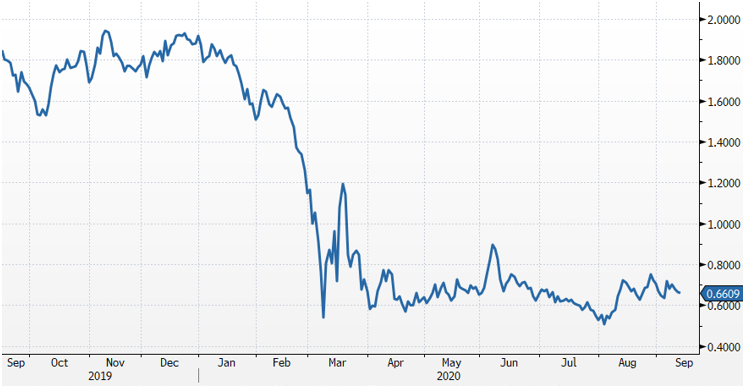 Fed: No Hikes Until We See the Whites of Inflation’s Eyes
Scroll to top