Last Week: Interest rates rose and global equities were little changed on the week. The yield on the US 10-year Treasury note continued its advance in anticipation of tighter monetary policy, rising to 2.58% from 2.49% a week ago, as 1-month LIBOR rose to .8905% from .8465% over the same period. Oil fell to $49.25 per barrel from $53 a week ago on the back of rising inventories, while Gold and the US Dollar followed suit. Volatility, as measured by the Chicago Board Options Exchange Volatility Index (VIX), was little changed at 11.7.

US Nonfarm payrolls rose 235,000 in February, more than economists had forecast. The unemployment rate dipped to 4.7%, while the labor participation rate rose to 63%.  Of note was a 0.2% boost in wages for the month, or 2.8% year over year, yet another sign year-over-year increases are creeping up. Growth in wages is a necessary ingredient for increased spending and eventual increases in inflation. The strong data, along with upward revisions to prior months, have prompted some Fed watchers to forecast a faster pace of tightening.

European Central Bank president Mario Draghi said this week that deflation risks in the Eurozone have “largely disappeared,” as ECB inflation forecasts were raised to 1.7% from 1.3% for 2017 and 1.6% from 1.5% in 2018. In a sign of receding deflation concerns, the ECB dropped from its opening statement the phrase that it is prepared to use “all available instruments available within its mandate.” However, Draghi warned that downside risks remain, particularly around the geopolitical sphere.

This Week: Wednesday’s Fed meeting dominates a busy economic calendar. While a 0.25% hike looks all but assured, markets will scour details on the Fed’s updated economic and interest rate projections for clues a more confident Fed is shifting into a faster pace of tightening, as supported by a firmer economic view. Recent calls that the Fed is hiking too slowly will be tested, and we believe the Fed’s moderate stance remains intact, translating into a continuation of a slow, shallow and moderate pace of future rate hikes.

A bevy of economic data is on tap before and after Wednesday’s Fed meeting – gauges on producer prices, manufacturing, business inventories, industrial production, and consumer sentiment, that, while important, will do little to alter the Fed’s action in the near term. Within the data deluge, closer inspection will be made of reports on retail sales and consumer inflation, as both are key to fortifying the Fed’s new confidence that its inflation expectations will soon be met, and that subsequent rate hikes are needed.

On the international front, while our central bank is raising interest rates, the tide of global easy money is turning. Policy meetings at the Bank of England and the Bank of Japan this week will likely solidify the idea that accommodative policies by global central banks, which helped fuel market rallies, is now finished. What’s that mean for potentially new, higher highs for equity markets and Treasury yields?

Take-Away: Now that the Fed seems to be shifting to a steeper path of rate hikes, it’s important to remember that Fed hikes don’t necessarily translate into higher long term interest rates. Historically, tightening cycles have spurred out-performance in long-maturity debt, resulting in lower long term yields and higher bond prices, and this dynamic was certainly the case over the last three tightening cycles.

What are bond markets telling us? Signs abound that holders of longer-dated bonds see little risk of a substantial acceleration in growth and inflation; traders are paying just as much to protect against inflation over the next few years as a decade out; and there’s unprecedented demand for treasury strips, one of the most bullish bets in the bond market. It’s a sure sign, at least for the moment, that markets don’t expect the reflationary boost to last very long, and long-term interest rates won’t climb substantially higher. 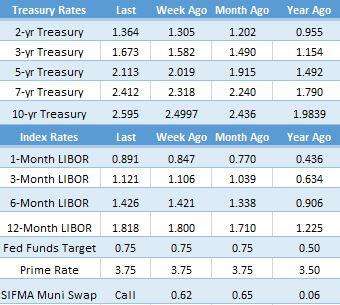 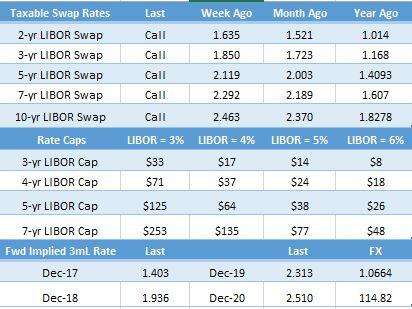 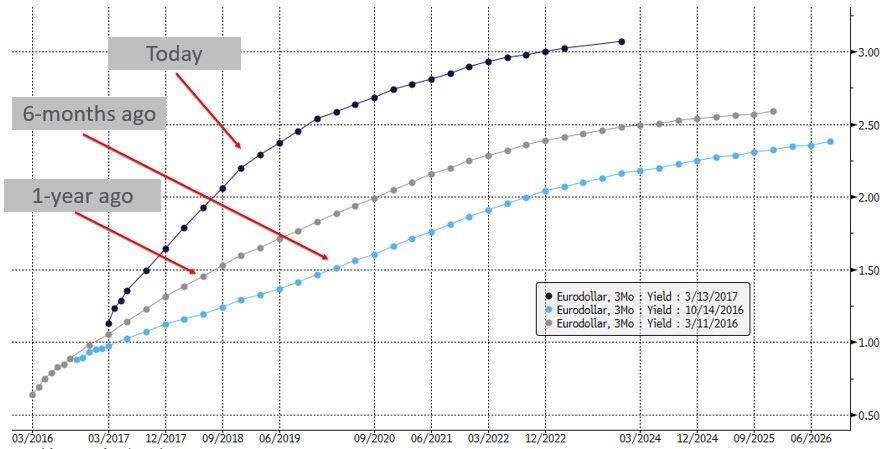 Time to Terminate Your Swap?
Scroll to top