Last Week: Interest rates plummeted, and equities traded lower on the week as markets factored in the growing odds of recession due to the ripple effects of the spreading coronavirus. The yield on the US 10-year Treasury note crashed to an all-time low below 0.50% before bouncing modestly. 1-month LIBOR followed suit, nosediving to .86% from 1.38% at the start of the week. The entire Treasury yield curve is now well below 1%. Elsewhere, in one of the most dramatic bouts of selling ever, Oil tumbled to $31.00 a barrel, hammered by a collapse in demand due to the coronavirus. The move was the most since the 1991 gulf war. The US Dollar weakened, and Gold strengthened amid investors broad flight to safety. Treasury yield volatility, one of the key determinants of the cost of rate caps and swaptions, spiked to 9.80 from 5.85 this time last week.

Virus fractures growth outlook. In just a few short weeks, the US economic picture for 2020 has gone from a sunny one of solid consumer-driven growth, supported by a revival in business sentiment, to a stormy one of deteriorating activity and an economy teetering on the brink of a downturn and major volatility in financial markets. Right on cue, the coronavirus scare led the Fed to cut rates by 50 bps last Tuesday. Prompted by the same economic fears, other central banks joined the Fed’s cutting party, including the Bank of Canada, which cut rates by a half-percent, and the Reserve Bank of Australia, which cut by a quarter-point.

Why is the outbreak causing so much financial pain? Here’s a quick primer – there are two sides to the economic damage being inflicted by the virus:

1) A negative supply shock. As factory activity grinds to a halt, goods consumers and businesses have come to reply upon simply become much more limited in quantity or unavailable all together. This ripples through business activity in the form of reduced sales and profits.

2) A negative demand shock. As consumers and businesses seek to shelter themselves/their employees from contracting/spreading the virus, goods and services they once sought out simply aren’t needed. Consumers in particular have been the main driver of US economic growth over the past several quarters, as the business side economy has essentially stagnated. As such, resilient consumer demand is critical to the 2020 economic outlook. Unlike the trade war, which mainly affected businesses, the virus scare cuts to the core engine of US economic growth – household spending. As such, the earnings outlook for large businesses and the sheer survival of small ones both come into question as they scramble to ride out the virus induced financial storm. While Fed rate cuts won’t do much to remedy the mushrooming problems arising from a negative supply shock, rate cuts will help the economy recover from the demand shock as the pandemic begins to subside, providing a financial cushion of sorts. The cuts look to be so deep and global however, that….

More Fed cuts and QE are coming. Despite last week’s emergency 0.50% Fed rate cut, we suspect the Fed will cut several more times and likely provide additional quantitative easing-like stimulus as part of a multi-pronged policy response from the Centers for Disease Control, the Fed, the President and Congress, all aimed at containing both the outbreak and financial market shock. The Fed may cut by 0.75% more by July bringing the Fed funds lower bound to 0%, yes, that’s right, zero percent. We suspect the Fed’s remedy will be administered in three, 0.25% cuts, one at each of its three upcoming policy meetings on March 18th, April 29th and June 10th.  In addition to rate cuts, the Fed will likely focus on more dramatic, quantitative easing (QE”) measures in March. While the odds are against negative interest rates, the QE would come via Treasuries and mortgage-backed securities. The Fed will probably consider a Bank of Japan-style QE with yield-curve control as well, which would nudge long term Treasury yields higher.

What it all means for growth. Due to the looming aggressive action by Congress, the Fed and the like, we expect the US will ultimately avoid a recession, but won’t see a steep recovery after the pandemic fades. Employment remaining solid is the key to avoiding recession. If consumers can generate enough income to support spending and remain confident in the economic outlook, a prolonged recession is off the table.

Blowout jobs report is old news. In what is usually the single most important piece of economic data for interest rates, the February jobs report, released Friday, was mostly ignored. Given that the effects of the coronavirus began to manifest themselves in the US in late February, the jobs environment has likely deteriorated from the rosy picture painted by the jobs data. Nonetheless, the US economy added a more-than-expected 273K new jobs in February while the unemployment rate declined to 3.5%. If the outbreak turns out to be less disruptive than feared, the strong labor market heading into the crisis combined with the looming stimulus supplied by the Fed could set the stage for a recovery, but for now, financial markets will continue to grapple with a rising probability of recession.

What to Watch this Week: Now that it’s looking like the US economy is facing a direct hit, we’re on high alert for any sign that credit is seizing up. If it shows up, we’ll see it first in the commercial paper and repo markets, along with spreads in US junk bonds. Spreads have already widened considerably on some debt instruments. Europe’s signals for the region’s most fragile, indebted companies is flashing read and Asia credit markets are already in turmoil.

On the data front, the ultimate challenge for the Fed and government is to instill enough confidence in consumers to ensure that income is spent and not diverted into an economically-debilitating spike in savings. For this reason, the next critical economic data point will be the preliminary March print on University of Michigan consumer sentiment, reported on Friday, March 13th. A severe decline in sentiment would be an omen of a pullback in discretionary spending, such as what occurred after the 20% market correction in the fourth quarter of 2018.

Rates are at record lows, and likely headed even lower – So what’s a borrower to do?

About to lock a fixed rate? Be careful about rushing to capture the current ultra-low fixed rates via an interest rate swap – there are ways to save money on swap fees the lender likely isn’t telling you, and never sign the ISDA Agreement without negotiating business terms. Interest rates will likely move even lower or at the very least, remain at current levels.  This means time is on your side to make a sound and objective decision.  Call us to discuss.

In the midst of a construction loan that will move to a permanent one in the next year or two? Consider a Swaption and take some of the uncertainty of future, unknown fixed rates off the table for mere pennies on the dollar.

Staring down the barrel of a refinance in the next eighteen months? Swaptions work exceptionally well for those situations too right now.

Have term debt maturing within a few months to 3-years from now? Consider defeasing the loan or paying yield maintenance.  Today’s ultra-low rates generate savings that could exceed the cost of defeasance or yield maintenance.

About to close a floating rate loan and buying a rate cap? Rate caps are dirt cheap right now.

1) Consider a rate cap with a lower strike or a longer term than the lender requires. You’ll be creating a structure similar to a fixed rate loan without any of the prepayment penalty headaches.

2) Pay attention to the LIBOR floor in the loan agreement and let us help you negotiate it. Otherwise, you’ll essentially have yourself a fixed rate loan as LIBOR moves lower – likely not what you originally intended.

Not sure what to do? Give is a call. 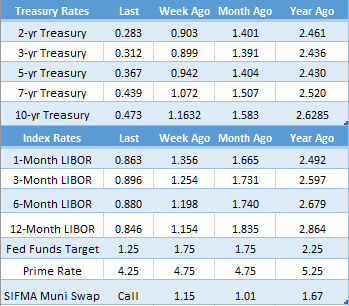 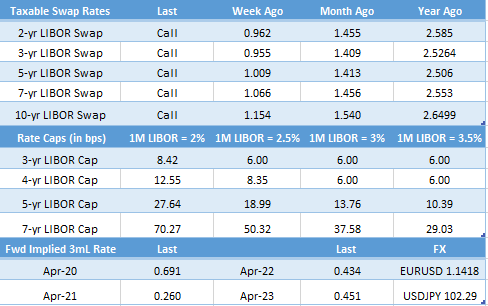 Click here for more DL Reports
Rates off a Cliff: Now What?