Last Week: US Interest rates and equities were virtually unchanged on the week, despite last Wednesday’s much-anticipated Fed rate hike.  The yield on the US 10-year Treasury note fell 4 basis points from a week ago to 2.16%, while 1-month LIBOR continued its steady rise higher to 1.2122% from 1.1393% the week prior.  Oil and gold declined while the US dollar held steady. Volatility, as measured by the Chicago Board Options Exchange Volatility Index (VIX), edged up slightly to 10.9 from 10.0 a week ago, but remained at historically low levels.

Fed hiked rates, revealed plan to shrink bond holdings. In mostly a non-event, Yellen & Co. hiked rates by 0.25% on Wednesday, and indicated it will likely hike rates once more this year. Also, the central bank laid out the framework it will use when it begins to shrink its massive balance sheet, a process it indicated will begin later this year. Despite three rate hikes, yields on US 10-year notes are nearly a half-percent lower today than they were when the FOMC resumed its tightening cycle in December 2016.

What does the Fed’s plans for unwinding its balance sheet mean for business? The belief is that as the Fed sells off its massive holdings of treasuries, it will raise or at the least, create a floor of sorts for interest rates. As a result, competition among lenders will slowly increase, as they’re forced to raise rates to investors to continue to attract capital.

UK election fallout reverberated through markets. Credit rating agency Moody’s Investors Service officially warned last week that the latest UK political developments further complicate Brexit negotiations with the European Union and are a credit negative. Meanwhile, inflation remains a major concern for Bank of England policymakers after consumer prices rose 2.9% versus a year ago, the fastest pace in nearly four years. Why should you care? The recent spike in UK inflation has increased calls for a rate hike by the Bank of England. If the UK’s central bank does indeed hike, it will add upward pressure to US rates as well. Markets were caught by surprise as three members of the eight- member Monetary Policy Committee – there is one vacancy on the committee – voted to raise interest rates last week in order to rein in inflation. A growing quorum of UK central bank officials calling for a hike hasn’t been seen in years.

This Week: It’s a light week for economic data, with just a handful of second-tier data sets on tap for release, which will gauge the state of housing and the economy more broadly. In addition, as is always the case post-Fed meeting, we’ll see a parade of Fed officials in full PR-mode hammering home the Fed’s message via scheduled speeches. Markets will watch for clues as to how unified Fed officials are as well as for any hints of doubt.

Take-Away: What markets are most concerned with at present is the fact that the Fed hiked rates and maintained its hawkish forecasts despite tepid inflation pressures. The trillion-dollar question: What does the Fed know that the market doesn’t, and why is inflation so low?

According to economic theory, as economic growth accelerates, demand for labor increases, jobs are created and unemployment falls, eventually resulting in higher wages and prices for goods we all use every day. In such a scenario, a central bank should be hiking interest rates to keep growth and prices in check. Applying this theory to the real world, US economic growth has indeed picked up, demand for labor has risen and job creation has improved and remains strong. What hasn’t occurred – yet – is an increase in wages and prices (read: inflation).

So why is the Fed intent in hiking when the usual gauges of inflation – the core PCE index being the most prominent – are far from the danger zone? We believe the inflation indexes don’t consider the whole inflation picture, that other factors, like exchange rates, commodity price moves and industry-specific trends not tightly linked to the business cycle, must also be taken into account. In doing so, we believe the economy is now roughly at full employment, with job openings or reported skill shortages already signaling a modest overheating, and that the US dollar will strengthen and commodity prices will remain stable or rise. With that, we expect the Fed will hike again by 0.25% in December, and that it will formally begin to unwind it massive balance sheet in September. Until then, markets will have to take the bitter pill of witnessing more hikes this year in the midst of what most see as little reason for them. 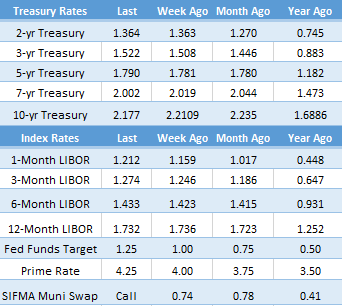 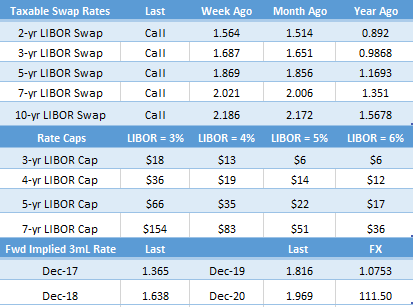