Last Week: US interest rates and equities drifted higher, the latter reaching all-time highs at midweek before backing off slightly ahead of the weekend and the former spiking markedly on Friday. Yields on US 10-year Treasury notes rose to 2.38% versus 2.34% a week ago as 1-month LIBOR ended the week at 1.2460% from 1.2442% over the same time period.  Oil gained ground amid uncertainty surrounding Saudi Arabia and Venezuela, climbing to $57.20 per barrel from $54.60, as the US Dollar and Gold fell. Market volatility, as measured by the Chicago Board Options Exchange Volatility Index (VIX), rose to 11.11 from 9.5.

US House and Senate offered differing tax plans. The key differences the two bodies will need to iron out is the effective date of the proposed corporate tax cut from 35% to 20%. In the House bill, the cut would go into effect next year, while the Senate’s plan calls for the cut to become effective in 2019. In addition, the plans differ regarding the deductibility of mortgage interest. The Senate plan would allow the deduction on mortgages up to $1 million, while the House bill limits the deduction to home loans over $500K, and would only apply to new mortgages. More key details will emerge this week, as GOP leaders are under intense pressure to pass a tax bill before the end of the year after failing to enact any major initiatives during the Trump administration’s first year in office.

More Details Emerged on the Official Plan for LIBOR’s Replacement. The International Swaps and Derivatives Association (ISDA), known as the voice of the derivatives industry, and the creator of industry-standard derivatives documentation, announced that its planning process for transitioning financial contracts away from LIBOR to the new alternative risk-free-rate is underway. If you weren’t aware, by January 1, 2022, swap counterparties, lenders, borrowers, debt issuers, and all other market participants that enter into contracts (e.g. loans, rate caps and swaps) referencing LIBOR will need to (a) amend their existing contracts that extend past 2021 to include a “LIBOR fallback,” (b) draft revised benchmark terms to be incorporated into new contracts, and (c) implement a basis risk mitigation plan for the inevitable spread between LIBOR and the new reference rate. ISDA’s announcement last week was welcome news and is yet another sign that the transition away from LIBOR is happening. Are you prepared?

What to Watch This Week: It’s all about the tax plan and inflation this week. Markets will be focused on whether the US House can pass its version of the tax bill – and with what amendments – once it reaches the floor. The Senate may also begin hearings on its version of tax reform.

On the economic data front, the calendar is packed, with data on consumer prices, retail sales, industrial production and housing starts on tap. Markets will be watching keenly to see if the data normalizes from hurricane-induced distortions over the past couple of months. The data highlight of the week is Wednesday’s release of the Consumer Price Index (CPI), one of the Fed’s favored gauges of inflation, and the last before its next rate-setting meeting on December 13th. This week’s CPI release could have game-changing potential, in that if it misses projections, it could erode the market’s confidence in a December hike. At the moment, markets are pricing in a more than 90% chance of a hike next month.

Fed speakers will also be out en-masse in the days ahead, potentially providing direction to the markets in regard to the degree of the Fed’s conviction for a 0.25% hike next month, amid stable economic growth and stagnant inflation. Our view: Sure, inflation is low, but we doubt it will decline much further given the tightening of labor markets and solid economic growth. The Fed will hike 0.25% on December 13th.

Take-Away: Business and consumer expectations for tax reform are high, inducing heightened optimism and an increasing willingness to spend and invest. If tax reform doesn’t get done before the end of the year, we could see the US consumer retrench, growth lose some of its respectable momentum or decline and longer-term rates fall further. Only time will tell.

Until this year, the Fed tip-toed around the bond markets for years, fearing that a tightening of monetary policy would result in wild swings in Treasury yields, disrupting markets and creating unnecessary volatility. No longer it seems. The Fed has stuck to its hiking promises thus far this year, helping to shape the market’s opinion weeks ago that a December hike is a done deal. One result is the flattening of yield curves to levels not seen in a decade. The upside of a flat yield curve? Falling long term rates, which have caused some borrowers to consider using more option based vehicles for hedging floating rate risk, such as interest rate collars and swaptions, or reconsidering fixed interest rate financing over floating. 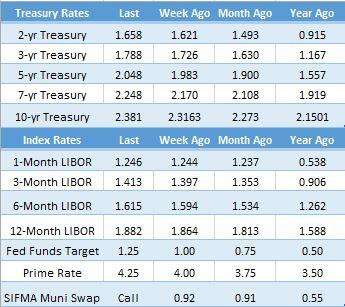 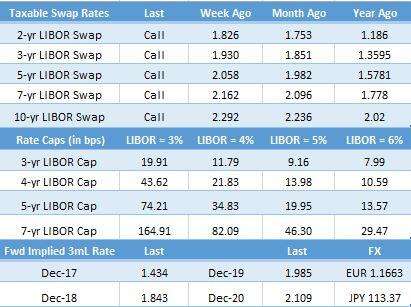