Last Week: Interest rates fell, and equities rose as investors tip-toed back into risk amid a seeming plateau in COVID-19 deaths. The yield on the US 10-year Treasury note declined 11 basis points to 0.62% as 1-month LIBOR continued its slow, steady decline to 0.67%, about 13 basis points lower than the start of the week. The price of a barrel of West Texas Intermediate crude oil fell to a 21-year low of $14.55 as concerns that the world is rapidly running out of places to store it after output cuts proved insufficient to cope with plunging demand. Treasury yield volatility held steady in its recent range near 7.00, way down from its peak of 16 at the height of the virus shock a few weeks back.

Virus Update: White House laid out guidelines for reopening US economy as new admissions and deaths seemingly plateau. The President’s Coronavirus Taskforce announced guidelines for a phased reopening of the US economy on a state-by-state basis after certain epidemiological benchmarks are met. The guidelines call for the economy to be reopened in three phases but don’t suggest specific reopening dates. At present there are as many as 29 states that meet the criteria for reopening under the President’s guidelines, but final reopening decisions will fall to each state’s governor. Opinions differ widely on when and where any re-opening should occur, and we’re of the opinion that a broad re-opening carries great risk for the economy. Read on for more details…

There won’t be a V-shaped economic recovery – here’s why. At an average of 1,800 deaths per day since April 7th, the virus is now the leading cause of death in the US, exceeding daily deaths from heart disease (1,774) and cancer (1,641). However, hospital admissions are plateauing and there are fewer Covid-19 patients in I.C.U.s. Per the news headlines, the daily death toll nationally is still grim but is no longer rising. The leading epidemiological model, produced by the University of Washington’s Institute for Health Metrics and Evaluation and often cited by the White House, originally predicted 100,000 to 240,000 deaths by midsummer. They’ve recently reduced that estimate to 60,000.

While the numbers are beginning to look better, they don’t tell the whole story. The U of Washington’s current model only runs through August 4th and only covers the first of what could be successive waves of the pandemic and reflect deaths that occurred amidst a near total lockdown of the country. As the White House’s phased re-opening of the economy is rolled out, the infection and death toll will rise. If the re-opening occurs too fast, the virus will bloom anew, more people will get sick, and the shelter-in-place mandates from states will be re-imposed in abbreviated fashion, stifling the economy all over again. Then the cycle repeats. For this reason, it’s likely that only essential parts of the economy in the highest infection/population density areas like NYC will reopen anytime soon, like some schools and factories with skeleton crews. All told, it’s a scenario where growth will rebound in a W-shaped recovery; slowly, over a staggered geographic area over a long period of time in fits and starts. There will be sudden stops along the way. Amid it all, the devastatingly weak economic backdrop will likely prevail for months and rates will remain range-bound near all-time lows.

Get ready for your immunity ID card. Soon the government will have to invent a way to certify who is immune to the virus and who isn’t. Those who have recovered from infection – have the antibodies – and are immune to the virus will be able to travel and work; those who are still vulnerable won’t. Those that are sick, even mildly so, will need to be isolated. A new class structure could develop as a result: The immune, the vulnerable and the quarantined. The economic and societal impacts of such are mindboggling. In the near term, the path forward depends on factors that are certainly difficult but doable: a carefully staggered approach to reopening, WIDESPREAD TESTING and surveillance (aka contact tracing), a treatment that works, adequate resources for health care providers – and eventually an effective vaccine. Get comfortable, the lasting effects of the virus will be with us for many months if not years.

Markets looked past dire economic data. The scale of the economic devastation wrought by steps taken to slow the spread of the coronavirus is coming into sharper focus as more economic data are released. China reported its first quarterly drop in economic growth since it began reporting data quarterly in 1992. The country’s gross domestic product declined 6.8% in the first quarter compared with the same quarter a year ago. If reported on a quarter-over-quarter seasonally adjusted annual rate, as it is the US, the decline would have approached 40%. The International Monetary Fund released a revised outlook for 2020 global GDP, forecasting a 3% drop in global growth, a much deeper contraction than the 0.1% decline that followed the global financial crisis just over a decade ago. In Europe, auto registrations fell 52% in March compared with the same month a year ago while US retail sales fell a record 8.7%, a reading taken before many stay-at-home orders were issued. Also, the US saw another 5.25 million claims for unemployment benefits filed, bringing the four-week tally to around 22 million.

Despite the grim data, US Treasury yields fell, and equity markets rallied, implying that investors are getting more comfortable with taking financial risk again. They’re doing so mainly due to the swift action of the Fed and Congress. Despite investors’ renewed risk-taking appetite, however feeble, the grim economic outlook promises to be a drag on yields. On the flip side, helping to support Treasury yields – and even spur them higher – is the government’s ballooning debt issuance needed to pay for all the trillions in stimulus its pumping out. The Fed will soak up a big chunk of it, but it’s gradually slowing its pace of buying after going hog wild at the height of the crisis. So as Treasury bond auctions grow and become more frequent, investors will have to digest the rest.

Regardless of the counter forces of the Fed vs. economic gloom, rates will likely move lower before they’ll move appreciably higher. The billion-dollar question now? Are you positioned to weather the economic pain and to emerge as strong as possible? When it comes to interest rate caps, swaps, swaptions and defeasance, now is the time to have an independent advisor on your side.

What to Watch this Week: The key economic data releases this week are the jobless claims report on Thursday and the durable goods report on Friday. There are no scheduled speaking engagements from Fed officials this week, reflecting the Fed’s blackout period ahead of its scheduled monetary policy meeting on April 29th.

Once again, the most critical indicator of the speed and magnitude of the economic freefall we’re all experiencing is weekly filings for unemployment insurance, aka initial jobless claims. Most other economic data at this point reflects, at least partially, the state of the economy prior to the pandemic. as such, it’s mostly useless in assessing the state of the economy now. Since mid-March, 22 million displaced workers have filed for unemployment benefits, at a pace averaging 5.5 million per week. In the latest week, the pace dipped to 5.2 million from 6.6 million prior. While encouraging at face value, the decline in the newly jobless simply reflects a shortened filing period due to the Good Friday holiday, which commonly distorts the number of claims filed.

This week’s jobless claims will confirm whether the worst of the flood of claimants has truly passed. We’re skeptical; ongoing reports of overwhelmed filing systems from many states provide our main reason for doubt.

Big Picture: Ten-year Treasury yields have swung about 22 basis points in April from high to low, a relatively contained move after last month’s historic turbulence. The world’s borrowing benchmark yields 0.62% this morning, little changed from where it ended March. The volatility of Treasury yields – a key driver of the cost of interest rate caps and swaptions – has come back to earth after probing an 11-year high a few weeks back. Will the fragile calm in yields continue? Probably, but with occasional lurches.

The prospect of a widespread re-opening of America’s economy is fueling a growing list of optimists claiming things are on the mend. We beg to differ.  While it’s certainly good to have a framework in place, it’s premature to think that a widespread relaxation of restrictions is in sight when the daily death toll has reached a new peak, and a key piece of the solution – widespread, readily available testing that delivers quick results – remains elusive in most parts of the country. A piecemeal approach to re-opening the economy is likely to work best, and while it may well be a boost to sentiment if some rural areas are able to begin the path to normalization relatively soon, the reality is that many of the most economically important parts of the country will remain in lock down for another month or so. 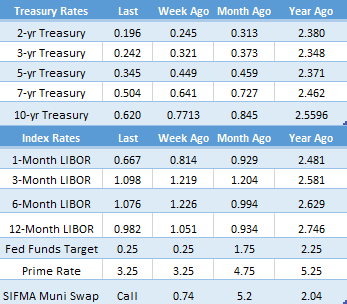 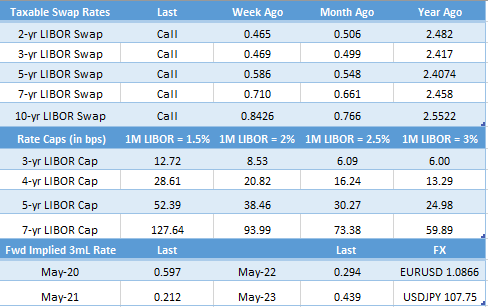