Last Week: Interest rates were mixed and equities rose on the week amid Fed and trade war-induced jitters. The yield on the US 10-year Treasury note retreated to 2.98%, the first time it’s traded below 3% since mid-September. 1-month LIBOR made up for some of its recent declines, rising to 2.35% from 2.33% the week prior.  The price of oil edged just below $50, maintaining its weakness amid a supply glut. The US Dollar weakened, and Gold traded flat. Treasury yield Volatility, as measured by the Chicago Board Options Exchange Treasury Volatility Index (TYVIX), declined to 3.88 from 3.94 a week ago.

The Fed muddied the water on the outlook for future hikes. The Fed has been on autopilot for the past two years, raising rates by 0.25% pretty much every quarter, except for in September 2017, when it announced plans to shrink the balance sheet. A couple of events last week – as we expected – implied change is in the air, however: 1) The minutes from the November Fed meeting indicated the Fed might switch off the cruise control after another 0.25% rate hike this month, pointing to slowing global growth, the negative effects of trade tariffs, and US dollar strength as downside risks to America’s pace of growth. 2) Earlier in the week, Treasury yields fell markedly after comments from Fed chair Powell, who stated rates are approaching a range the central bank judges to be neutral for the economy. Markets interpreted such as a signal that the Fed’s tightening cycle may be nearing an end in the next few quarters. In direct response, markets have begun to scale back their Fed hike forecasts, with only two additional hikes fully anticipated at present, well below the four to five anticipated previously and a far cry from the Fed’s current median forecast for five more. For months now, we’ve been forecasting three more Fed hikes, one in December, another in March and the last in June, as higher rates take their toll on growth. Last week’s events haven’t changed our outlook.

US and China declared a trade war “truce”. President Trump and China’s Xi Jinping agreed upon a pause in the tit-for-tat trade war during this weekend’s G-20 meeting of world leaders in Buenos Aires. The President agreed to postpone new tariffs on Chinese goods for three months in return for China’s increased purchase of US goods. The world was watching, and the arrangement gave both leaders a bit of breathing room as they face swooning stock markets and growing signs that both economies are slowing. While encouraging on the surface, the devil, as usual, is in the details. The amount of US goods China agreed to purchase wasn’t determined, and is “not yet agreed upon”. That tells us nothing was agreed upon, only that China will look for more US products to buy, but only the ones without tariffs, and that China will work to resolve “legitimate” US concerns on trade. Sound like a good deal for the US to you? Sounds like a lot of talk, leaving all of America’s hot-button trade issues, like stopping forced technology transfers, enforcing intellectual property rights and ending state subsidies of strategic industries, unaddressed. In reviewing the very different post-meeting statements from the two leaders, it’s clear to us that, in summary, China conceded no ground and America blinked. Looking ahead, per the agreement, the US and China now have 90 days to work out their differences. We doubt it will get done by then. Instead of “The Art of the Deal” its looking more like The Art of Kicking the Can Down the Road”.

Oil dropped below $50 a barrel. Who cares, what does the price of oil have to do with interest rates, right? Wrong. Falling oil prices were once a tailwind for the US economy, but now that we’re the world’s largest producer, falling prices cut both ways. Big swings in capital expenditures in reaction to the price of oil can impact the overall US economy. Oil production’s geographic concentration can also have a significant impact on state and local economies. Specific to interest rates, oil prices have a big impact on measures of headline inflation, and inflation drives bond yields. Given the recent eye-popping declines in oil prices – driven by a supply glut and waning global demand – everyone is guessing how low oil will go; its impact on inflation and how changes in inflation expectations would alter the Fed’s future rate-setting decisions.

More signs of weakness in global growth emerged. China’s official manufacturing PMI (Purchasing Managers’ Index) dropped to 50 in November, a 28-month low. Meanwhile, eurozone economic confidence fell for an 11th straight month, to the lowest level since May 2017, while two countries that are not members of the eurozone, Switzerland and Sweden, reported small contractions in growth in Q3. In contrast, US Q3 gross domestic product growth was unrevised at a 3.5% annual pace. The trillion-dollar question: How long can the US economy perform counter to the world’s slowing trend?

What to Watch this Week: In comparison to the torrid data and event week last week, this one is a light one, with only a couple of data releases and one speech worthy of your attention.

On the data front, Friday’s November payrolls report takes the spotlight, will likely show that hiring momentum remains robust. We expect an above-consensus 230K in new jobs last month, a decline in the unemployment rate to 3.6% and flat wage growth, ensuring that robust job creation will continue through year-end. Job creation should remain near 200K per month until either wages spike or economic momentum slows, neither of which will occur before year-end. For second-tier data, Monday’s ISM report for November will lend clues to the probability of a growth slowdown next year, via signals that recent market volatility and trade-war concerns may be filtering into business sentiment to any real degree. We doubt it just yet.

This week’s job report is important no doubt, but it will likely be overshadowed by Fed Chair Jerome Powell’s planned congressional testimony, specifically the Q&A portion (note that this speech, initially set for Wednesday, will be rescheduled due to this Wednesday’s market holiday to honor President Bush. The new date is unknown as of this writing). We expect the tone of such to be very different from that of his speech in New York last week which upended markets. While the Fed Chair seems to have adopted a more cautious tone, this week’s speech will give him an opportunity to clarify the message about the Feds hiking path next year.

Take-Away: Is the Fed really singing a different tune now, planning only a couple more 0.25% hikes before pausing as current market expectations suggest?  We’ve seen this movie before and know how it ends. Over the past couple of years, financial markets have periodically convinced themselves that the Fed was throwing in the towel on future rate hikes only to be proven very wrong later. With markets currently pricing barely more than two more Fed hikes through the end of 2019, an extreme shift from the previous four to five hikes expected just two weeks ago, we bet we’re seeing the phenomenon yet again.

The Fed’s main concern now is engineering a soft-landing next year as US economic growth moderates, but inflation pressures intensify. Chair Powell & Co will have to make the shift from being dependent on historical data for its decisions to a method of using forecasted data to avoid slowing the economy beyond neutral and causing a recession. Historically, the Fed has failed in this regard. 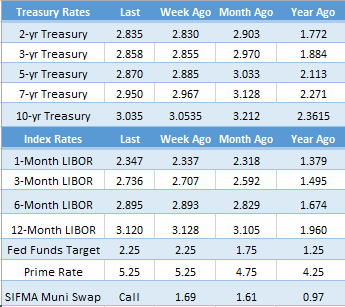 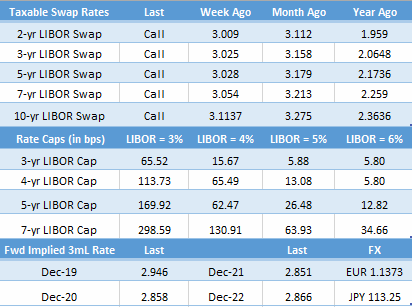