Last Week: US interest rates fell while equities edged higher amid supportive US economic data and impressive corporate earnings. Oil broke above the $50-per-barrel barrier at midweek, but eased to end slightly lower on the week as the US Dollar rose and Gold fell. The yield on the US 10-year Treasury note slipped slightly on the week to 2.27%, along with 1-month LIBOR, which fell 1.2289% from 1.2315% the week prior. Volatility, as measured by the Chicago Board Options Exchange Volatility Index (VIX), declined to 9.9 from 11.0 a week ago.

America’s jobs creation engine kept on motoring in July. US labor markets remained tight in July, with the unemployment rate slipping to 4.3%, matching a recent 16-year low. The economy added another 209K jobs, easily exceeding the 180K six-month average. Despite solid job growth, wages remain restrained however, with average hourly earnings holding steady at a 2.5% annual growth rate. The upbeat data should keep the US Federal Reserve on course to begin shrinking its balance sheet in the next few months, but could stall any sequential series of rate hikes the Fed is contemplating.

The Dow reached a new milestone. One thousand points isn’t what it used to be, accounting for a move of less than 5% at present levels, but markets took note of this week’s milestone nonetheless as the venerable Dow Jones Industrial Average broke and closed above the 22,000 for the first time. Solid corporate earnings and a weakening US dollar are providing a favorable backdrop for equities – and a steady state for bonds – amid “steady as she goes” economic growth and low inflation. The steady growth/ low inflation combination could keep the Fed from tightening monetary policy more quickly than expected.

This week: While impressive, the July jobs report hasn’t materially changed the market’s economic outlook for the remainder of 2017, as the slight uptick on job creation in July over the monthly average is consistent with expectations for higher GDP over the same period (2.6% vs the first half’s 1.9%). The big take-away from the jobs data is that wage gains remain slight and increasing inflation remains elusive as does any near-term Fed rate hike.

As such, with the primary inflation gauges flattening or trending lower over recent months, this week’s update via Thursday’s July Producer Price Index (PPI) and Friday’s July Consumer Price Index (CPI) reports will take center stage as markets look for signs that inflation’s multi-month backslide is reversing. Unlike many in the market, we expect inflation to log a long, slow grind higher over many months with little evidence of change in its current pace coming from this week’s reports.

Take Away: The persistent lack of inflation in America’s economy is beginning to cast serious doubts as to the Fed achieving it’s 2% inflation target, and the ensuing chances of another rate hike by the end of the year. Unless we see a surprise read in inflation this week – which we doubt – the Fed will increasingly be between the “rock and a hard place” of rising GDP and nascent inflation.

So, what’s a central bank to do in this scenario? At the moment, nothing. The Fed is in wait and see mode, still expecting inflation to perk up soon, and thus justify more rate hikes down the road to keep growth in check. Another possibility is for the Fed to redefine its inflation target to say 3% from the current 2%, which was set back in 2012. While the topic is beyond the scope of this weekly update, the logic is that since rates have been near zero for so long, the economy needs more room to establish solid footing before the Fed slows it down via hiking rates. At the moment, we’re still expecting one more hike this year, likely in December. 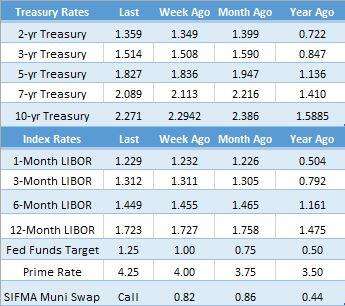 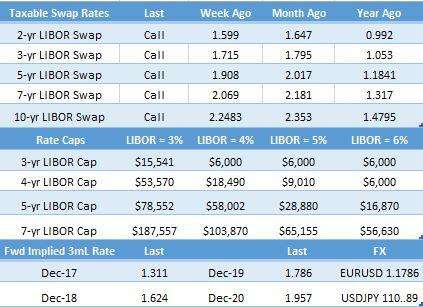 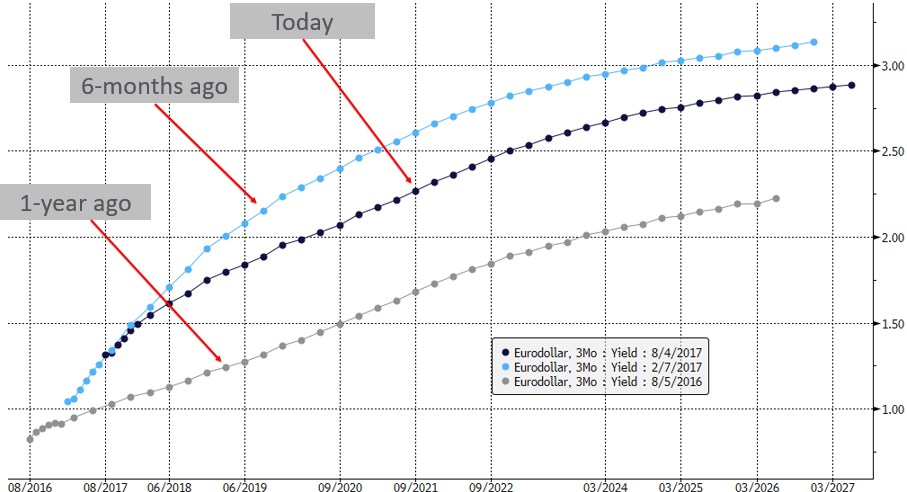 Click here for more DL Reports
A LIBOR Eulogy? Not So Fast

A Coin Toss
Scroll to top