Last Week: Interest rates and equities fell on the week amid concerns over slower global growth and growing headwinds from Europe and China. Yields on the US 10-year Treasury note declined 12 basis points to 3.09% while 1-month LIBOR rose slightly to 2.2966% from 2.2813% the week prior. Oil declined $3 to $66.75, the US Dollar and Gold strengthened. US Treasury yield volatility, as measured by the Chicago Board Options Exchange Volatility Index (TYVIX), rose to 4.69 from 3.93 a week ago.

US economy grew at a 3.5% rate in Q3. Pretty much everyone expected Q3 GDP to moderate coming off the red-hot Q2 growth rate of 4.2%, and America’s pace did slow a bit, but not as much as the consensus forecast. Last week’s advance reading of gross domestic product, the first of three, showed the economy expanded at a 3.5% pace, faster than the 3.3% consensus, surprising modestly to the upside. The report showed that while consumer spending was strong last quarter, business investment slowed dramatically to a near-stall.

Equity market volatility spurs markets to scale back Fed hike expectations. US stock markets weathered another bout of declines last week, driven mostly by declines in corporate earnings. The revenue declines, combined with an increasing number of companies that are facing challenges from US and Chinese tariffs, rising wage and transportation costs, and headwinds from a rising dollar, prompted some to surmise that companies’ earnings have peaked for this cycle. This dynamic, coupled with expectations of more Fed rates hikes, kicked the financial media in gear to begin contemplating when the Fed may take a pause. Don’t buy into the hype just yet: the recent equity market downturn, unless it intensifies significantly, won’t knock the Fed off its rate-hiking stride anytime soon.

EU called for rewrite of Italian budget. Thus far, we’ve spared you the unfolding drama surrounding Italy’s debt markets, as events there had little influence on US interest rates. That may be about to change. Being a member of the European Union (EU), Italy must submit its budget to European Union officials for clearance, given the tight economic interdependence of EU member countries. The EU rejected Italy’s draft budget last week – the first rejection in EU history – demanding a less-risky spending blueprint and potentially putting Italy’s membership in the EU in jeopardy down the road. The move increased volatility in the already volatile Italian government bond market, while leaders of Italy’s populist coalition ruling the country showed no signs of backing down. On top of it all, if growth continues to slow in Europe, and Italy’s slows even more, there is a risk that Italy’s debt will be downgraded below investment grade, which would unleash forced selling across the $2.5 trillion Italian government debt market and likely create problems for other countries on the eurozone’s periphery, namely France and Germany, the economic lynchpins of Europe. We’re a long way from that scenario for now, but the smart money is watching closely, as any further escalation could serve as a drag on US Treasury yields.

US vs China trade war to drag on through much of 2019. As more signs of economic deterioration continue to leak out of China, America’s continued strong economy gives President Trump an incentive to stick to his guns and hold firm on the US-China trade war. Chinese financial markets are in turmoil, growth has slowed, and bets for a weakening currency are increasing. All are slowly having a negative impact on Chinese economic growth. Conversely, US growth has remained strong, giving the administration staying power.

What to Watch This Week: The days ahead will be a tug-of war of sorts between any new bout of financial market volatility and reads on the strength of the US job market.

Any big moves in equity markets this week and next will add to the already tightening US financial conditions, likely negatively altering US economic prospects going forward. Unless an equity market meltdown occurs however, we expect recent events to embolden the Fed to continue their gradualist approach to rate hikes in belief that the rate hikes they’ve delivered thus far are finally getting traction.

On the data front, Friday’s October jobs report will take center stage, but we’ll view it with suspicion given that the recovery efforts from Hurricane Florence and Hurricane Michael will undoubtedly distort the numbers. Regardless, we’re expecting 195K in new jobs for October, and an unemployment rate of 3.7%, and believe that job creation remains near 200K per month, where it will stay until wages spike or economic growth slows, events we won’t see until early 2019 at soonest.

We’ll be particularly interested in the average hourly earnings (aka wages) portion of the jobs report, given that any overt strength there could easily dash blooming expectations for a pause in Fed hikes. Economists expect that wages rose 3.2 percent in October from a year earlier, up from a 2.8 percent increase in September. Should that expectation come to fruition, it would be the largest acceleration in wages since 2009.

Other labor-related data releases pepper the week, notably Wednesday’s Employment Cost Index and Thursday’s nonfarm productivity report. While both will give clues regarding labor-cost pressures, neither will be market moving.

Take-Away: As the financial media is busy hyping up the possibility of a Fed “pause”, which we feel is simply too early to seriously consider, we’ll instead focus on aspects of Q3’s GDP data due to its relevance to the near-term direction of interest rates.

As was stated previously, the GDP data painted a familiar picture of consumer-driven growth, which has dominated most of the current decade-long business cycle. Other, non-consumer contributors to growth in other categories have steadily decelerated throughout the year, most now coming in at half the strength seen in January. The data was a disappointment to “trickle-down”, supply-side economics believers in that it casts doubt on the notion that corporate tax cuts could lift long-term growth. While it could still happen, the data points to a more likely scenario: the surge in economic growth late last year and early this year was more likely due to a sugar-high resulting from tax cuts. What does the data mean for interest rates? Nothing new; moderating economic growth will only embolden the Fed to continue hiking, certain that its rate increases have finally gained traction, and will slow economic growth to a more sustainable level. The fly in the chardonnay? On a historical note, in 1994, 2000 and 2006, the market sniffed out the end of the tightening cycles before the Fed did. Treasuries rallied robustly shortly after those final rate hikes even without the central bank explicitly indicating that it was done hiking.

Is the financial market volatility making you nervous? Keep this in mind: The Fed is weaning us off a financial experiment never before seen in the history of economics. The Fed is moving away from its role of sugar daddy, no longer supplying markets with ample, consistent and predictable liquidity and allowing for economic and corporate fundamentals to have more sway on markets, like they should. Volatility is inevitable. 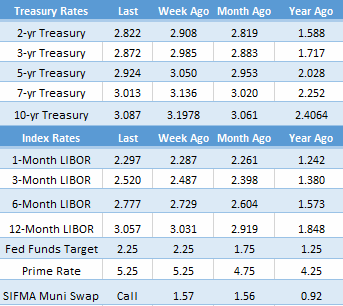 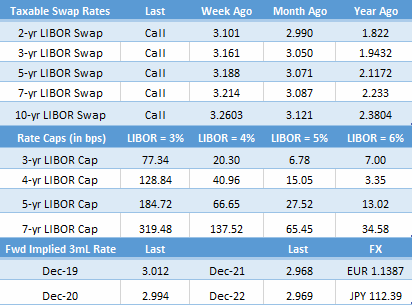 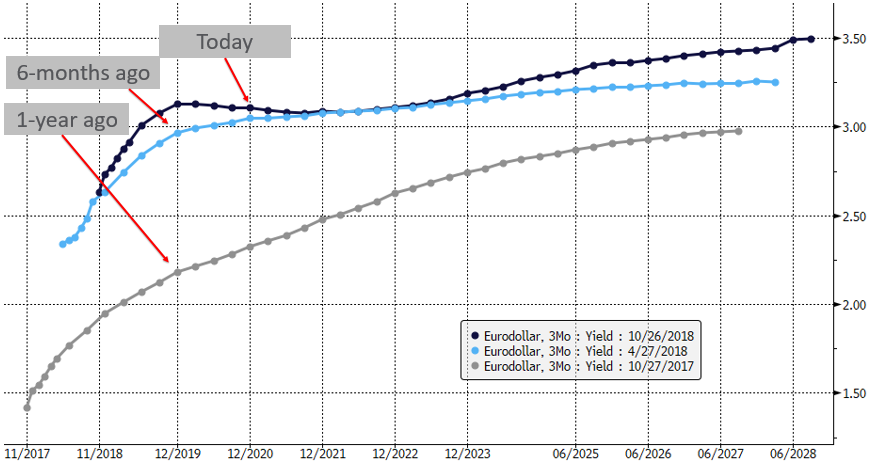