Last Week: A combination of mixed third-quarter corporate earnings results, uninspiring Brexit news and minimal global trade developments left interest rates mixed and led equity markets to modest gains. The yield on the 10-year US Treasury note inched higher, up a basis point to 1.80%, as 1-month LIBOR edged lower to match it at 1.80%, in concert with a near certain probability for a Fed rate cut this week. The price of oil rose 5% to $56.36 a barrel, while the US Dollar and Gold both strengthened. Treasury yield volatility fell to 4.61 from 5.38 this time last week.

In a scant data and event week, the outlook for business capex darkened. Headline durable goods orders (think the number of new orders placed with US manufacturers for washing machines, computer equipment, industrial machinery, etc.)  fell 1.1% in September, while consensus called for a decline of just 0.7%. The data supported our view that weak equipment spending will serve as a drag on America’s GDP growth through the rest of the year, as businesses continue to shelve marginal projects. The data also puts more pressure on the Fed to cut rates this week as business investment, hiring and business confidence remain key indicators for Fed officials as they assess the need for more ways to keep the growth rate humming.

Low rate volatility = inexpensive Rate Caps and Swaptions. The recent slump in interest rate volatility has put these types of interest rate hedges on sale again. If you’re considering floating versus fixed rate debt and are unsure of the inherent risks/opportunities therein given the current low rate and inverted yield curve environment, call us. We’ll clear it up for you.

Four central banks keep policy stable as Draghi bids the world adieu. The European Central Bank left rates unchanged on Thursday in what marked ECB President Mario Draghi’s last monetary policy meeting at the bank. The central bank kept its forward guidance steady, suggesting that the main interest rates will remain at their current or lower levels until other evidence emerges to prompt a change. Elsewhere, Riksbank (Sweden’s central bank) and Norges Bank (Norway’s central bank) will announce no monetary policy changes this week. Riksbank said the interest rate probably would be raised to zero percent in December, from -0.25% currently. Norges Bank left the deposit rate unchanged at 1.50% but expects a potential hike in March 2020 on slower growth expectations. Earlier in the week, Hungary left its monetary policy unchanged, preferring to wait for evidence of slowing inflation. All point to a world of low rates for even longer.

IMF forecasts growth rebound despite drab China forecasts. In its World Economic Outlook, the International Monetary Fund projected growth of just 5.8% for the Chinese economy next year, lower than its 6.1% forecast for 2019 (it was 6.6% for 2018). China’s projected slowdown next year contrasts with the IMF’s forecast for a recovery in the global economy. The fund said it expects a global economic growth rebound to 3.4% in 2020 after an anticipated slowdown to 3% this year (from 3.6% in 2018) partially due to uncertainties caused by the US-China trade war.

What to Watch This Week: We hope you got some rest over the weekend, as there’s an extreme concentration of market event risks compressed into just a few days. While such “big weeks” can often prove to be duds, on occasion they can indeed shift the interest rate narrative via a large change in their direction or volatility. One thing is clear: we’re running out of room for the market and the Fed to maintain their divergent views on interest rates. The next few days could significantly close that gap and will certainly shape the direction of rates for the rest of the year regardless.

Wednesday’s Fed meeting is obviously a key feature of the week’s calendar. Nearly everyone expects a 0.25% rate cut, bringing the cumulative cuts – since the Fed started this mid-cycle course

correction in July – to a total of 75 basis points. There’s a debate raging in markets about whether it will be the last for the year, or if we’ll get another cut at the Fed’s December meeting. If history is any guide, when the Fed cut three times in the middle of a growth cycle – namely in 1995/96 and in 1998 – economic growth and inflation were invigorated shortly afterwards. However, the economy was on firmer footing during those prior episodes than it is now; in early 1996, as the final cut in the first episode was executed, GDP growth was 3.0% and job gains averaged 224k for the quarter. In 1998, the quarter of the last cut saw GDP at 6.6% and payrolls averaging 281k. At present, GDP growth is poised to be just 1.8% in the fourth quarter and job gains look to be close to 135K – all told, a considerably weaker backdrop.

There are important economic data releases on either side of Wednesday’s Fed meeting, but the most interesting will come on Friday, via the October jobs report and ISM (a measure of manufacturing activity) figures. While there is some hope that manufacturing is stabilizing, last week’s durable goods orders data highlighted a clear, ongoing hesitation on the part of corporations to engage in any significant capital expenditure.

Friday’s jobs report – historically the most important piece of economic data for interest rates – is of added significance this time around as America’s torrid pace of job creation looks to be running out of steam. While the economy is certainly set to slow further in the back half of the year, this week’s jobs data for October would suggest otherwise at first glance, set to be running at a 135K new-job pace. The data will be aberrant however: measures of new factory jobs will be depressed by at least 50k due to the GM strike; the jobs data will be further reduced by 15K jobs or so due to the reversal of temp hiring related to the 2020 census. All told, due to these temporary drags, a 100k jobs print is in order. We expected 75K in new jobs, and an unemployment rate at 3.6%. The low numbers will certainly raise alarms of a deeper job slowdown, but the smart money will withhold judgement until November’s report when the temporary impacts have resolved. For context, the private sector’s three and six-month average job creation is currently 119k and 133k, respectively, compared to a 12-month trailing average of 167k.

Take-Away: The full calendar of economic data releases will show that America’s growth engine is decelerating notably from its pace in the first half of the year, that job creation is following suit to an even more extreme degree and finally, that the large slump in manufacturing activity is extending even further. In the midst of it all, this week’s Fed meeting will be one where the central bank cuts rates while mulling whether it’s enough to convince markets that the good times will keep on rolling. Now that domestic growth has slipped below 2%, the economy is at greater risk of a destabilizing exogenous shock. As reflected in the IMF’s latest round of forecasts, global growth prospects continue to deteriorate. And while trade tensions have seemingly paused, they have not yet resolved.  This weak backdrop warrants more stimulus from the Fed, one that will push the Fed’s hand in cutting yet again by another 0.25% in December. 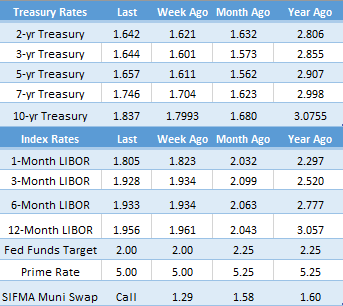 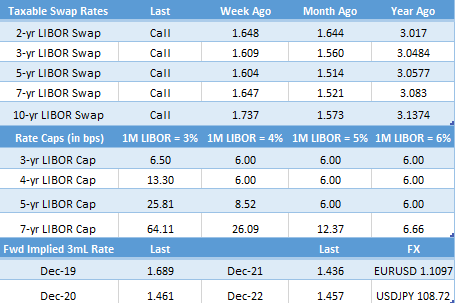 Fed on Hold? Not so Fast.
Scroll to top