Last Week: Interest rates were mixed as global equities posted solid gains. The week started with stories about higher projections for interest rates and equities, only to end with increased Fed speculation and mostly lower rates. The yield on the US 10-year Treasury note faded seven basis points on the week, to 2.32%, while 1-month LIBOR increased to 1.2261% from 1.2238% the week prior. Oil rallied slightly, the US Dollar fell and Gold rallied. Volatility, as measured by the Chicago Board Options Exchange Volatility Index (VIX), dropped to 9.89 from 11.75 the week prior.

US Retail Sales stumbled. Headline retail sales were down .2% month over month, with six of the 16 categories falling into negative territory. Department stores in particular were hurt, falling .7% after a similar drop in May. While a trend can’t be established by one month’s worth of data, the limp reading isn’t inspiring confidence that the almighty consumer – who is single-handedly responsible for 2/3rds of economic activity –  will continue to drive US economic growth.

US Consumer Prices flatlined for the fourth consecutive month. The Fed’s preferred gauge of inflation – the Consumer Price Index (CPI) – was unchanged for June, following a 0.1% decline the prior month. Markets forecasted a 0.1% rise. The gauge reflected broad price stagnation in everything from household furnishings, clothing and hotel stays, indicating that inflation may remain low and underscored concerns about the viability of additional interest rate hikes. CPI has exceeded the Fed’s 2% target only once since April 2012.

Yellen’s testimony stirs policy debate. Fed chair Janet Yellen testified on monetary policy before the House Financial Services Committee as markets continued to digest the Fed’s recently announced balance sheet reduction plans. Chair Yellen reiterated that the Fed expects a tightening labor market to lead to increased inflation, but added, however, that the Fed may change course from its policy plans if needed. Last month, the central bank raised rates for the third time since December 2016.

This Week: It’s a light week all-around, as the Fed goes into its blackout period ahead of the July 26 FOMC meeting and markets get a break from the economic data deluge of recent weeks, which showed hiring momentum rebounding, tepid wage gains, inflation backsliding and consumers limping through Q2. In response, many economists are now lowering their growth projections for Q2 GDP based upon a growing belief that America’s economic momentum isn’t accelerating. As such, markets will focus on the scheduled release of US regional production surveys this week for additional clues into Q2 economic activity.

Take-Away: Should economists’ growing fears of slower growth come to fruition and consumer prices continue to stagnate, inflation will likely continue to undershoot the Fed’s 2% target and reasons for another rate hike this year will evaporate. For the moment, the Fed continues to promote its mixed message:  low unemployment will eventually manifest into higher inflation, despite the current read of feeble economic data.

Has the Fed made a mistake by continually talking up rate hikes as the economy seemingly slows? Many in the markets point to the recent flattening of the yield curve (higher short-term rates and lower long-term ones – see our LIBOR futures graph below) as evidence the Fed is making a policy error. The flatter yield curve makes short-term borrowing more expensive and as some state, slows the economy more than it would have otherwise. We don’t think so. Why?  Because while the US employment picture is undoubtedly robust, the inflation picture is subject to noise, transitory pressures and is only moderately connected to the business cycle. 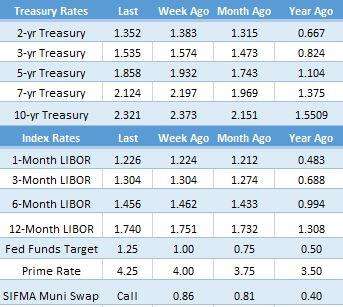 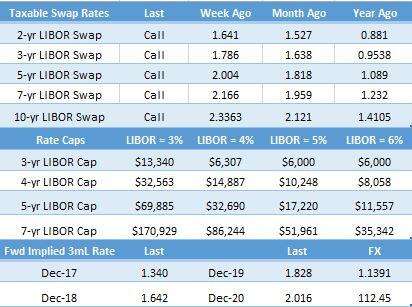