Last Week: Interest Rates were mixed as equities set record highs again, both against a backdrop of solid US economic and earnings growth. Yields on US 10-year Treasury notes edged lower, trading at 2.34% versus 2.42% a week ago while 1-month LIBOR traded slightly higher to 1.2432% from 1.2421% the week prior. Oil rose by $2 to $54.60 as the US Dollar rallied and Gold fell. Volatility, as measured by the Chicago Board Options Exchange Volatility Index (VIX), declined to 9.50 from 10.8.

Fed left Rates Unchanged. In a widely expected move, the FOMC left interest rates unchanged but hinted that a rate hike remains likely at its December meeting. The decision’s accompanying statement acknowledged that the recent hurricanes had caused mild economic disruptions but that they were unlikely to persist over the medium term.

US unemployment fell to lowest level since 2001. The US economy created 261,000 new jobs in October as the labor market rebounded from disruptions linked to hurricanes Harvey and Irma. The rebound was somewhat smaller than our 360K forecast however. The unemployment rate fell to 4.1%, a 16-year low, as average hourly earnings (aka wages) disappointed yet again, coming in unchanged versus the prior month, and rising at a 2.4% rate year over year, down from 2.8% last month. Therein lies the conundrum that confronts the Fed: if the data speaks of full employment, why aren’t wages rising as the supply of labor becomes smaller and smaller?

US consumer confidence hit a 17-year high. The US consumer confidence index rose to the highest levels since December 2000, spurred by surging equity prices and tight labor markets. In addition, investor confidence also rose, with the Investors Intelligence survey hitting a bullish reading of 63.5%, up from 63.2% a week ago. In early September the index stood at an eleven-month low of 47.1%.

Trump named Powell to replace Yellen as Fed Chair. US president Donald Trump nominated Jerome Powell to replace Janet Yellen as Federal Reserve Board chair. Powell has been a member of the Fed Board of Governors since 2012. If confirmed, he is expected to maintain monetary policy continuity while rolling back some post–financial crisis banking reforms. Based on our preliminary analysis, the post-Yellen Fed rate setting committee will take on a more hawkish profile next year. Fed Chair Yellen’s term ends February 3rd.

LIBOR’s replacement was named. The Secured Overnight Funding Rate (SOFR) was unveiled at the New York Fed’s Alternative Reference Rate Committee’s roundtable last week, as well as a few more details on its implementation. While still very murky, the effective transition plan looks for the first transactions based on SOFR to come by end of 2018, with a full transition away from the present-day LIBOR to come by the end of 2021. Curious how LIBOR’s demise will affect your business? Call us.

Republicans flesh out tax bill. Corporate tax cuts make up the centerpiece of the tax reform proposal unveiled last week by Republicans in the US House of Representatives. Among the bill’s provisions is one that would permanently lower the corporate tax rate from the current 35% to 20%, though interest deductions for businesses would be limited. The plan retains the top 39.6% income tax rate, but raises the threshold at which the tax would kick in for married filers from $470,000 to $1 million a year. Under the proposal, the 40% estate tax would be eliminated in 2024, while the estate tax exemption would immediately double to $11.2 million per married couple. Unchanged under the plan would be 401(k) plans, though deductions for state and local income taxes would be eliminated. Property tax deductions would be limited to $10,000. Some of the themes emphasized in the bill are the elimination of many tax credits, deductions, and exclusions, which could simplify the complex tax code somewhat. However, other provisions make it more complex in areas such as the taxation of pass-through businesses.

BOE hiked rates for first time in decade. The Bank of England hiked its policy rate from 0.25% to 0.5%, the first increase in more than 10 years. The move comes in reaction to a post-Brexit surge in inflation, largely because of weakness in the pound sterling that resulted in rising import prices. The BOE indicated that further rate hikes are expected “at a gradual pace and to a limited extent.” The pound fell 1% after the announcement while yields on United Kingdom government bonds declined, aided in part by concerns expressed by the MPC that the uncertainty surrounding Brexit will continue to weigh on domestic activity, which has slowed even as global growth has accelerated. The last time the BOE hiked rates was in July 2007.

What to Watch This Week: After the event and data deluge last week, the week ahead is relatively calm with just a few relevant events. Fed Chair Yellen joins scheduled speeches by a few other Fed officials, but isn’t expected to speak about monetary policy or the economy other than stating she’ll work with her likely successor Jerome Powell to ensure a smooth transition to Powell’s new Fed leadership.

Other than speeches by Fed officials, markets will be watching Friday’s release of consumer sentiment data for any signs of retracement. We don’t expect any real change and that the almighty American consumer will continue to power growth in the absence of business investment. Markets will also be watching further developments on the passage of the Republican tax bill, as the house tax-writing committee begins debate and revisions to the bill itself over the next four days. We’ll have a much better sense of its odds of passing by the end of the week.

Take-Away: Data and events of the past week firmly established that America’s economy is on a solid path of growth. As such, it’s a near certainty that the Fed will hike 0.25% in December. Markets expect the same, currently holding an 87% probability the Fed will hike on December 13th.

Other than the December hike’s slow grind to certainty over the past few weeks, we’ve been watching something more ominous for several months now:  the growing divide between the Fed’s and the financial market’s appreciation of the growing US economy. The Fed and most reputable economists continue to cling to the idea that consistent job creation and the falling unemployment rate – now at its lowest level since the year 2000 – will eventually translate into inflation and higher prices for everything from labor to washing machines.

Unlike the Fed, financial markets are highly skeptical, citing the lack of wage gains – now at their lowest level since February 2016 – as evidence to the contrary. This difference of opinion is expressed in the flattening of the Treasury yield curve, where the Fed, by way of it pronouncements of hikes in the future, pushes short term rates higher and markets push longer term rates lower. One popular measure of the flatness of the curve is to measure the difference between the 2-year and 10-year Treasury yields, which now stands at a meager 72 basis points, the lowest since November 2007. The flatter the curve gets, the more rapidly we approach an economic slump, so says conventional wisdom. The upside of a flat yield curve? Falling long term rates, which have caused some borrowers to consider using more option based vehicles for hedging floating rate risk, such as interest rate collars, or reconsidering fixed interest rate financing over floating. 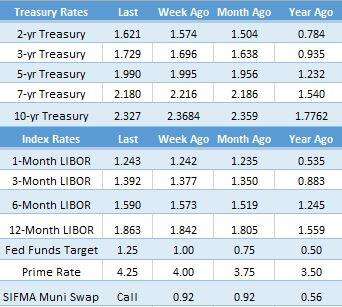 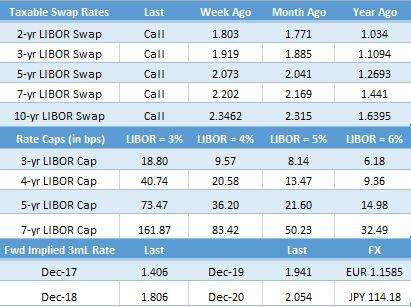