Last Week: News that America’s jobs engine rebounded strongly in June dominated the economic headlines last week.  Posting a monthly rise of 287K jobs –  the largest increase in eight months and beating the median economist forecast by 107K  – the number proved that May’s paltry 11K was indeed an outlier as we had hoped. The unemployment rate climbed to 4.9% from 4.7. month over month while wage growth climbed a less than expected 0.1%, the year over year increase was 2.6%.

Despite the rebound in jobs, yields barely lifted off their recent lows and actually made fresh ones after the data was released. The 10-year Treasury declined to 1.3579% – a new record low – from 1.3753%, while 1-month LIBOR climbed to .4758% from .4702 %. Equities and gold rallied while oil fell.

This Week: Two main issues will garner the market’s attention: First, a full calendar of speaking engagements by Fed officials peppered throughout the week will provide plenty of opportunity to express their thoughts on recent events such as BREXIT, the jobs report and what they both mean for future Fed policy.

Second, Friday’s release of Retail Sales data, which will be analyzed for signs that a recent pull back in auto sales presaged a broader pullback by consumers. The previous two reports, for April and May, confirmed a healthy pace of consumer spending in Q2, pushing GDP growth above trend. This week’s report for June will have important clues on momentum into the second half of the year. We expect Jun retail sales should be weak at -0.2%, but with gains of 0.4% ex auto and 0.3% ex auto and gas.

For other economic data, it’s mostly a quiet week, starting slow with all the other important releases occurring on Friday. We’ll be watching Friday’s report on Industrial Production this time around as a notable increase could feed into wage pressures later. We expect an increase of 0.2% for June.

Take-Away: While Friday’s jobs report painted an impressive rebound in America’s job creation activity, one can view it as a glass empty or half full scenario. The data brought the running three month average of job growth to around 140K; not enough to cause the Fed to respond immediately with a rate hike, but high enough to continue the feeling that we continue to grind higher toward an economy with respectable growth and the possibility of a rate hike by year’s end.

The fly in the chardonnay is the continued decline in Treasury yields, specifically the fact that treasury yields didn’t increase as one would expect (from investor’s sale of Treasuries as they seek less-safe, riskier assets) post positive jobs data given the market’s view that the Fed is back in the hiking game at some point and things aren’t as terrible as previously feared.

Not only did Treasury yields not rise after the release in the jobs data, they declined even further, some to record, never before seen lows (the 10 & 30 year treasuries specifically). Why?

The unusual dynamic reflects the tension between signs of US economic strength and very little growth in the rest of the world. The economic stagnation has pushed other countries yields on over $11 trillion of government bonds below zero. Global investors are flocking to U.S. debt to gain any semblance of return in a world chock full of negative interest rates.

Low to negative interest rates, combined with the widely-held view that the Fed is on hold for quite some time, has also pushed the gap between yields on two and 10-year Treasuries, a measure of the yield curve, to the least it’s been since November 2007. This is important news for hedgers, as the combination of low yields and a flat yield curve are boosting the appeal of certain hedging strategies that haven’t looked good for over a decade.

Looking to hedge floating interest rate risk? There’s never been a better time to talk to us. 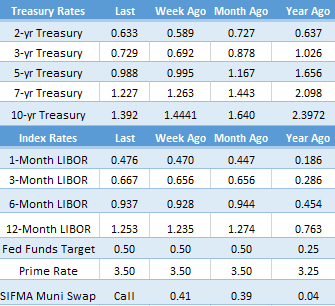 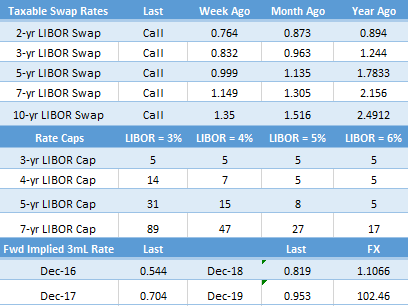