The Grinch Arrived Early This Year

What You Missed: Long-term interest rates rose, and equities fell slightly from record levels, as renewed fears of inflation gripped markets. The yield on the US 10-year Treasury note rose 10 basis points to 1.56%, while short-term rates, like the 2- and 3-year Treasury yields, where most of the action has been of late, rose to levels not seen since March 2020. The price of a barrel of West Texas Intermediate crude oil dropped $0.50 to $80.75, as the US Dollar and Gold both strengthened. Treasury yield volatility, a key driver of the cost of rate caps and other option-based derivatives, rose to levels not seen since April.

Consumer inflation rose to its highest in 30-years – are we doomed?  It’s getting lonely in the “inflation is transitory” camp, as price spikes spread through the economy, no longer confined to sectors impacted by supply chain disruptions or short-term pressures stemming from the reopening. The Consumer Price Index (CPI), a gauge of a basket of consumer goods and services, such as transportation, food, and medical care, rose 6.2% year over year in October while the core measure, which excludes food and energy prices, rose 4.6%, a 30-year high. That’s the fastest annual pace since 1990, cementing high inflation as a hallmark of the pandemic recovery and eroding consumer spending power even as wages surge.

For some color, shelter costs, which makes up about a third of the overall CPI index, rose 0.5% in October, the most in four months as higher rents and home prices feed into the data. Prices for new cars rose 1.4%, used-vehicle prices jumped 2.5%, food is up 5.3% from year ago, the most since January 2009, gas rose 6.1% from September, the biggest gain since March, and electricity costs jumped 1.8%, the largest monthly increase since 2014, and fuel oil advanced 12.3% from the prior month, the most since 2007.

The fallout? The inflation surge suggests higher inflation will be longer-lasting than previously thought, putting pressure on the Fed to end near-zero interest rates sooner than expected and perhaps even force it to quicken the pace of its bond-buying taper announced two weeks ago. On the political front, the inflation surge threatens to exacerbate political challenges for President Biden and Democrats as they seek to pass a nearly $2 trillion tax-and-spending package and defend razor- thin congressional majorities in next year’s midterm elections. The CPI didn’t move the market’s expected timing of the next Fed rate hike much; futures markets still expect a 0.25% rate hike as early as July 2022 and have maintained their strongest expectation of rate hikes in a decade. Despite market expectations, we still suspect we won’t see the first rate hike until Q3 at soonest, but more likely in Q4 2022.

Our take: Turbo-charge demand with fiscal and monetary stimulus at a time when bottlenecks constrain supply, and what do you get? Inflation! If you think inflation at a 30-year high is shocking, buckle your seat belt, it’s going even higher. With the increases in prices being broad-based and in areas tough to remedy quickly, e.g., higher energy prices, intensification of supply-chain bottlenecks along with higher rents, we suspect that CPI won’t peak until early next year, topping out somewhere near 6.9% YoY. While it looks scary now, the pandemic-driven inflation we’re all experiencing now will disappear next year, and be followed by deflation in many categories (ex labor), particularly commodity centric and tech sectors.

For the Federal Reserve, the bar for speeding up its tapering pace is high, and we doubt the Fed will alter its bond-buying pace just yet. But the next two readings of consumer inflation, next month and in January, the final two readings for 2021, will put the Fed’s patience to the test. In the meantime, upward pressure on short-term rates, like the 2-, 3-, and 5-year Treasury yields, key drivers of the cost of rate caps and swaptions, should hold fast. The billion-dollar question now? With consumer prices now running at a faster pace than wages, will workers pressure employers to match the increase, sparking a wage-price spiral and a potentially steeper path of Fed rate hikes.

The Grinch arrived early this year. Directly related to the latest sky-high inflation reading, consumer sentiment plummeted in November, with anxiety about inflation helping to push the gauge to a decade low. The preliminary reading of the University of Michigan’s consumer sentiment index for November fell to 66.8 from 71.7 prior: that’s the lowest reading in 10 years. The consensus forecast was for sentiment to improve (to 72.5).

The report noted that “one-in-four consumers cited inflationary reductions in their living standards in November, with lower income and older consumers voicing the greatest impact.” Consumer prices are now running at a faster pace than wages, a negative sign for real income expectations and demand. On that front, the report also noted that half of all families anticipate reduced real incomes next year. A severe slide in perceived buying conditions for large durable goods and autos continued in November, ahead of the holidays.

Looking ahead, the risk to consumers – whose spending make up 70% of America’s economic activity – is outsize, persistent price rises feed into the consumer-inflation psyche. In the near term, shortages and prices should continue to cause consumers pause. A drift higher in inflation expectations could undermine the Fed’s  – and our – prediction that inflation is indeed temporary, and that core inflation will eventually settle near the Fed’s 2% target. It’s well over 4% now. This year’s holiday spending season is critical for the economy to emerge into next year on solid footing. Will it be a bust? An increasing number of signals are pointing that way.

Want another barometer for where inflation may be headed? Watch China. Like here in the US, wholesale prices faced by Chinese producers, the folks that make all those shiny things we all buy, have been rising rapidly in the past few months, first due to the global commodity price rally and then output curbs caused by a power crunch. Although China’s impact on global inflation has diminished over time, the pickup in Chinese producer prices is another risk factor for many countries – specifically the US –  given China’s status as the world’s biggest exporter. One ray of light? The recent collapse in the price of coal, a favored fuel for China’s factories, from a mid-October peak may limit the bleeding of Chinese inflation into the US.

What to Watch This Week: On the heels of the shockingly high inflation reading, the question now is just how the always-important US consumer will fare going through the holidays, and ultimately, what it means for Q4 2021 and Q1 2022 economic growth.

With wage growth now running below inflation and pandemic government transfers winding down, consumers’ faith in the future is a tad more subdued than it once was. October retail sales (Tuesday) will show whether this recent drop in consumer confidence has also reined in their spending. Pent-up demand is still a thing, and consumers still have a cushion in their bank accounts, thus we suspect that the retail sales data will surprise on the upside, although high gasoline prices will take some of the shine off what could have been.

All told, the week’s economic data will leave us with a sense of how long the current state of resilient consumer spending and business profits will last. That largely depends on the pace of the jobs-market recovery (jobless claims, Thursday), whether wage growth catches up to inflation, and if businesses can ultimately make up for higher costs with improved productivity. These questions won’t be answered any time soon and will linger well into the weeks ahead.

Big Picture: As bond traders around the world try to force central banks to respond to high and rising inflation, unusually large price swings have shown up of late, especially in the short end of the Treasury yield curve . These large price swings have taken their toll, prompting some reluctance among traders to participate in the market.  This Fed vs. bond trader tug of war could result in a vicious cycle in which reluctance to participate in the market impairs liquidity, making large yield/price swings even more likely.

Based on measures of bond market liquidity, trading conditions in Treasuries are the worst since March 2020, when the pandemic spurred massive central-bank intervention around the world. As for the expected volatility of Treasury yields, volatility gauges are near the highest since April 2020, after last week’s CPI data release unleashed the biggest Treasury market selloff since February.

This heightened volatility in bond yields translates directly into high and rising rate cap prices and prices of other option-based interest rates hedges, like swaptions. Swaptions are a tool many borrowers have used of late to help take the edge off their expectations of higher rates in the near term.

Are you curious about ways to protect yourself from the coming world of higher interest rates? There is a way. Contact us to learn how. 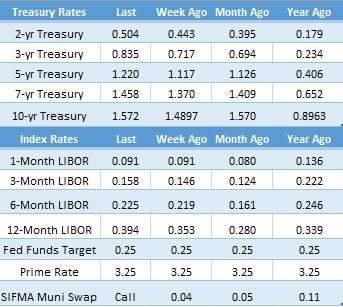 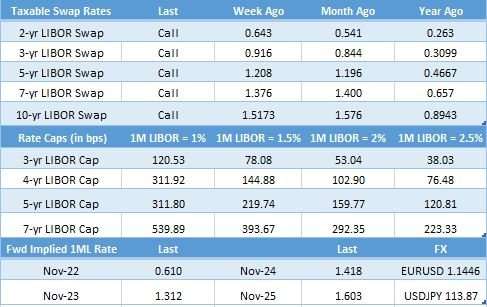 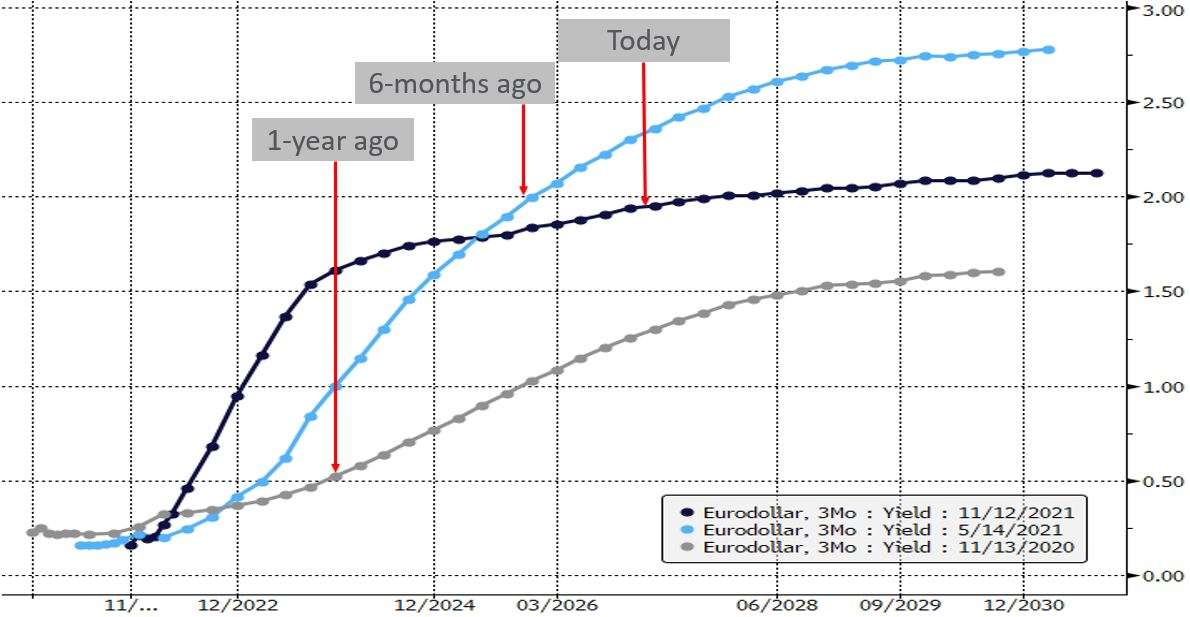 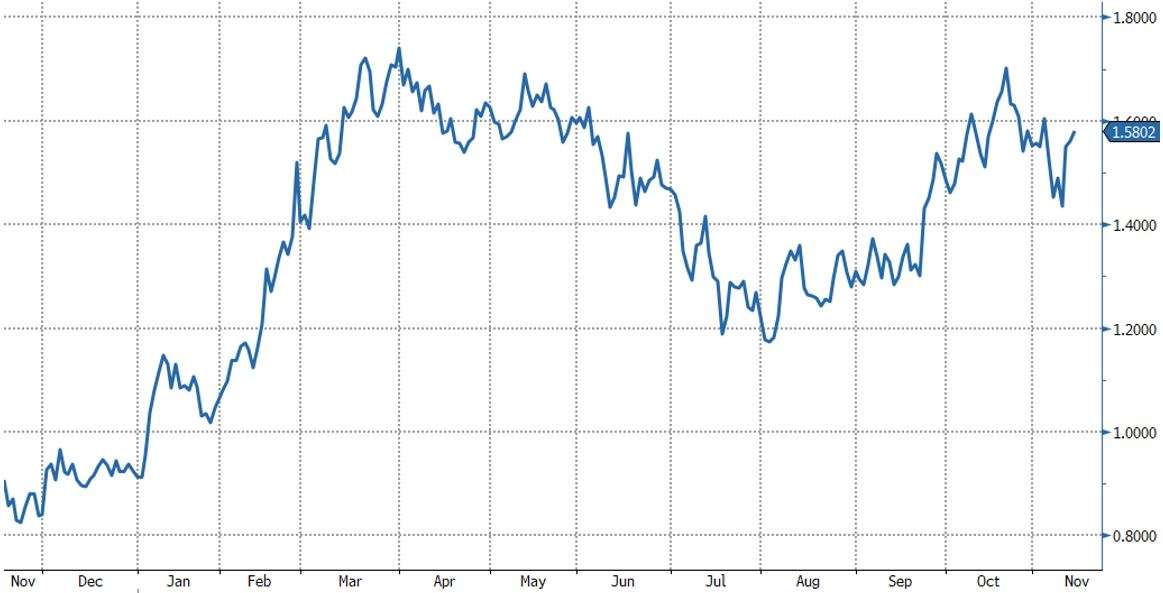