Last Week: Interest rates were mixed, and equities were lower on the week as US mega-cap technology shares came under selling pressure amid a rotation from growth into value and data showing more jobs were created in August than expected. The yield on the 10-year US Treasury note declined consistently throughout the week, but made up those declines and more on Friday, ending up slightly higher on the week at 0.72% from 0.71% a week ago. 1-month LIBOR drifted in a tight range, wrapping the week about where it started at 0.155%. The price of a barrel of West Texas Intermediate crude oil declined to $40.35 from $43.10 a week ago, as the US Dollar strengthened, and Gold weakened. Treasury yield volatility, a key driver of the cost of rate caps and swaptions, rose steadily throughout the week.

Have you registered for the virtual 2020 Western States CREF Conference? We’re sponsors again this year, and if you haven’t registered, click here and use “LOGIC” code to register for free at checkout. See you there on September 9th & 10th.

US has recovered about half of pandemic-related job losses. In what is the most important set of economic data for interest rates, the monthly jobs report for August put a positive slant on the recovery. The US economy added 1.37 million jobs in August, in line with expectations, though the unemployment rate fell sharply, to 8.4% from 10.2%. About 240k of the hires were temporary workers engaged to conduct the decennial US census. Since the coronavirus pandemic took hold in March, the economy has regained roughly 11 million of the more than 22 million jobs lost. The pace of recovery slowed a bit last month but is ahead of the pace most economists anticipated at the height of the crisis.

Our take: The expiration of the $600 Federal top-up to unemployment benefits appears to have encouraged some folks off the couch, and the lingering uncertainty around the next round of Congressional stimulus will likely draw even more people off the employment sidelines. While certainly positive, the billion-dollar question now: Is it sustainable? With the strength of the economic recovery in danger of petering out,  its sustenance will depend on the vigor of job growth in the months ahead, which in turn relies on progress on the public health front and the willingness and ability of employers to hire more people. Simply put, the longer it takes for the unemployed to get back to work, the slower the economic rebound will be. For interest rates, assuming respectable job gains are achieved in the months leading up to and just beyond year end, it’s a recipe where short term rates are anchored at zero due to the Fed’s pause and longer term rates, like the 10-, 20- and 30-year Treasury yields, slowly drift higher as the economy recovers and investors gradually get comfortable investing outside of the safety of US Treasury bonds. And what do you call that? A steeper yield curve.

The state of US manufacturing improved – again. The ISM manufacturing gauge expanded in August for a fourth straight month as gains broadened; orders for new goods were the strongest since 2004, and production was the best since 2018. Momentum will likely continue in the coming months – albeit at a slower pace amid stunted consumer demand – helped by perceptions that inventories of manufactured goods at retail stores are too low (been to Staples, Best Buy, Ikea or Target lately? They are out of everything.) Why you should care: Manufacturing firms are maintaining a tight grip on spending – both for new hires and capital expenditure plans due to the possible looming punch of a surge in virus case counts that hits both demand – via lockdowns or sentiment impacts – and/or supply – via fresh plant closures. It’s a scenario that tells us all we need to know about the future pace and timing of a true economic recovery: it’s all up to the virus, despite our illusions to the contrary.

What to Watch This Week: It’s a sparce calendar for data and events in the week ahead, allowing financial markets to catch a breath and digest last week’s latest labor market data and assess whether the strength of the recovery, evident in the last few jobs reports, will continue through year-end and into 2021.

Consumer-price data and Treasury auctions will provide potential catalysts to shift long-end rates. Elsewhere, Thursday’s central bank rate decision by the European Central Bank will be a driver that helps determine whether the Treasury yield curve steepens or keeps flattening. Spreads between 2-year and 10- year Treasury yields, along with 5-year and 30-year rates, shrunk almost every day last week as markets unwound bets against long-maturity debt.

The always important weekly jobless claims data will continue to garner attention this week, although its importance will soon lose some relevance, given that many Americans will simply become ineligible to get unemployment benefits – and therefore slip off the measurement radar – after exhausting 26 weeks of state unemployment benefits.

The Fed has entered its communications blackout period ahead of the next monetary policy decision on September 16th, thus leaving a large hole in the event calendar for the week.

Big Picture: We don’t know about you, but to us, it feels like the “easy” part of the economic recovery has come and gone. The backdrop of cautious optimism amid persistent uncertainty could fade in the months ahead, as Covid-19 case counts remain elevated or rising in some areas. America heads into the back-to-school and fall seasons, bringing critical tests to the re-opening experiments being conducted across the country. For Congress, the Fed and the President, the hard work begins now.

As such, given that a sustainable recovery utterly depends on folks getting back to work and spending anew, we suspect to see a far flatter trajectory in new job gains in the coming months. In addition, amid the many job-loss announcements of late by companies large and small (e.g. United Airlines, Ford, Walgreens, Airbnb, Virgin Atlantic, Hilton Hotels, IBM, Uber, Chevron, Boeing, MGM Resorts, Hertz, Lyft, Coca-Cola, Salesforce, American Airlines, NBC Universal, Schlumberger, Daimler and Wells Fargo to name a few), a significant jump in unemployment duration is coming into view, evidencing a coming life of long-term unemployment for many, which will start to show up in next month’s job report, and bleed into lost income and stunted consumer spending in the months ahead. It looks likely that the “last-mile” of a full economic recovery will be a long slog, if we get back to the pre-Covid economic benchmarks at all.

The behavior of consumers, via their ability and willingness to spend, amid the tumult is a key variable for interest rate moves going forward.  Let’s hope we don’t see a spike in cases after Labor Day.

Is your business prepared for such a scenario? Contact us to find out. 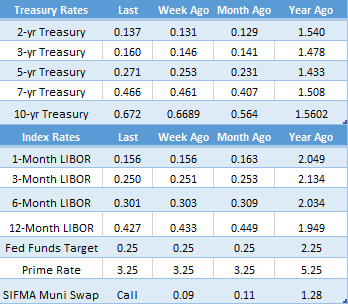 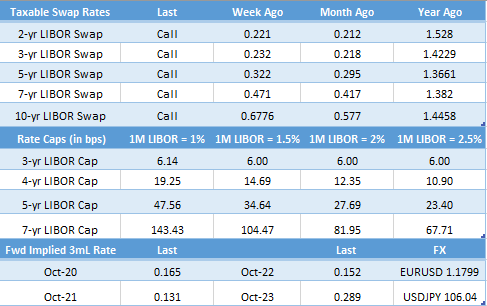 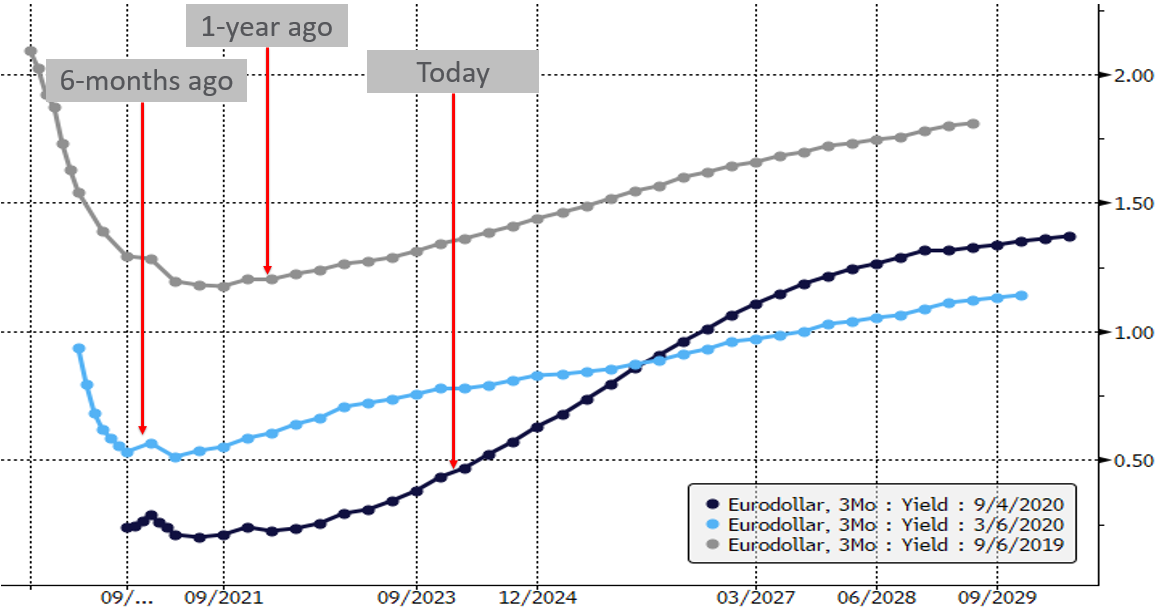 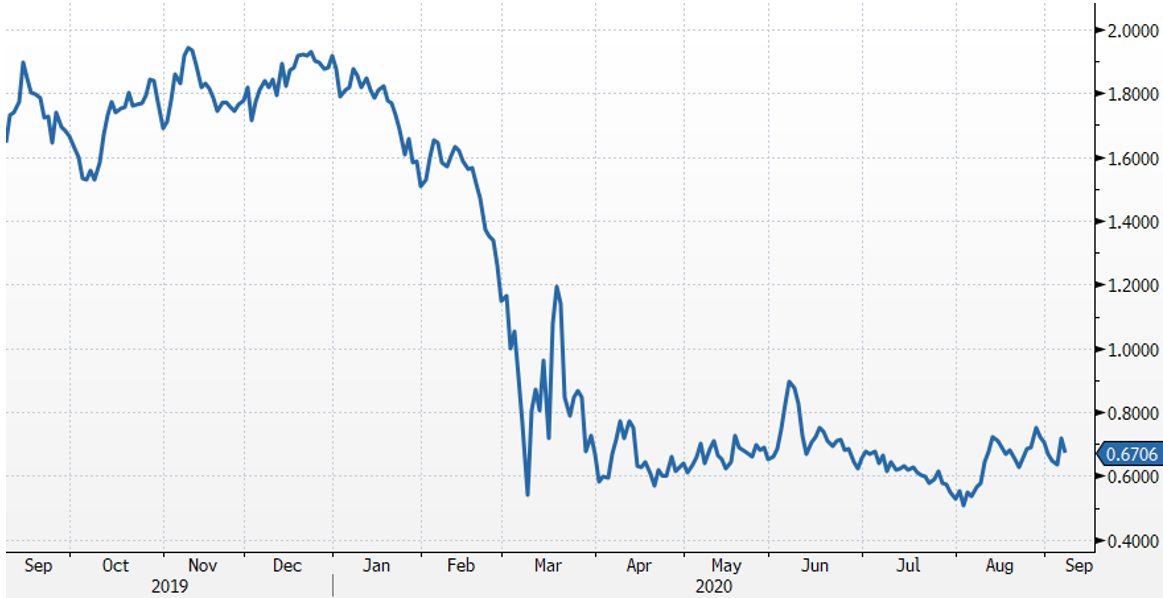