Last Week: US Interest rates and equities rose slightly last week, with major indices once again setting new highs. The yield on the US 10-year note rose six basis points to 2.30% on the week while 1-month LIBOR fell slightly to 1.2316%. Oil rose, the US Dollar fell and Gold rose. Volatility, as measured by the Chicago Board Options Exchange Volatility Index (VIX), rose to 11.00 from 9.9 a week ago.

US GDP rebounded from a sluggish start to the year. As has occurred in several years past, US economic growth accelerated in the second quarter, rising 2.6%, up from the first quarter’s paltry 1.2% pace. Despite the rebound, the bounce was well short of expectations from earlier in the quarter and below what markets had expected. Modest growth averaging around 2% looks to be in the cards again in 2017 as muted wage pressures persist, pro-growth policies from Washington look less likely by the day and hopes for sustained faster growth fade. As a direct result, while likely failing to meet its own rate hike projections yet again, the Federal Reserve will continue on its gradual path of rate hikes while turning its attention to the long end of the curve via balance sheet normalization.

The Fed signaled it’s ready to cut its balance sheet soon. In a statement released after Wednesday’s FOMC meeting where it held rates steady as widely expected, the Fed indicated its readiness to begin trimming its balance sheet, stating that it expects to begin allowing some of its bond holdings to mature “relatively soon.” This is a shift from earlier language that indicated a move by the end of the year. We expect an announcement to come at the September FOMC meeting, and the actual unwind activity to begin in October.

UK regulators announced plan to phase out the LIBOR benchmark rate by 2021. While surprising to some, regulators have sought a replacement for LIBOR for some time as past rigging scandals and an overall lack of transactional data to support its use tainted the benchmark long ago. The process for phasing it out has yet to be mapped out let alone announced, and won’t be for some time. While more than $350 trillion in outstanding securities are based off LIBOR, markets can rest assured that the transition to a new benchmark will be detailed, announced well ahead of time and there will be plenty of time for market participants to adjust. Regardless, attorneys are salivating at the approaching wave of contractual changes that will need to be made as a result of the switch. In short, don’t freak out.

This Week: July’s jobs report, set for release this Friday, will take the data spotlight in the coming week; we’re expecting an increase of 185K following a 222K gain in June. We’ll be watching the wage growth data that comes along with it – officially called Average Hourly Earnings –  for signs that consumers’ income gains are sufficient to keep consumer spending in the driver’s seat for economic growth. Without it, GDP growth in the second half of 2017 will struggle.

Also of focus is the full calendar of scheduled speeches from Fed officials, which will likely give greater clarity to the timing and pace of the Fed’s balance sheet unwind. When the unwind finally begins, likely in October, we expect the Fed to put its unwind machine on auto pilot and focus on managing the economy via interest rates.

Take-Away: Last week’s Q2 GDP data signaled more of the same for the pace of US growth and that the almighty US consumer – not business – continues to be the main driver of growth. For growth to accelerate and sustain above the 1.9% clip achieved in the first half of this year, we’ll need to see a consistent rise in wages, and hence a corresponding increase in consumer spending or businesses finally getting off the bench and investing in a meaningful way. At the moment, neither looks likely.

What’s it mean for future rate hikes? A September rate hike is now highly unlikely, and even a December hike is beginning to look questionable as the Fed takes baby steps toward unwinding its balance sheet and inflation backslides further away from the Fed’s 2% target. A strong read on wages this week could change all that. 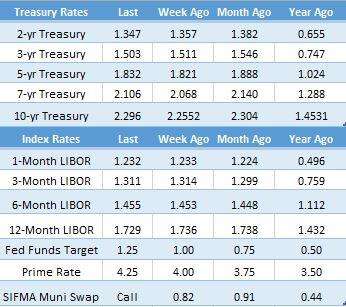 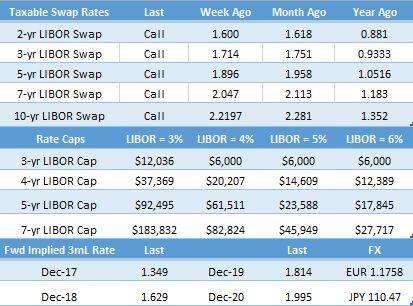 A LIBOR Eulogy? Not So Fast
Scroll to top