Last Week: Interest rates rose while global equities remained flat for the week amid an out-sized spike in US Treasury yields amid near-record service industry growth and a 48-year low unemployment rate. The US 10-year Treasury note rose to 3.24% from last week’s 3.05% – a 1.7 standard deviation move – wrapping the week at the highest level in more than seven years and extending a near-30 basis point move higher in the past month. The 30-year Treasury yield rose to its highest level since late 2014, and the 2-year Treasury yield rose to its highest level since mid-2008. 1-month LIBOR rose as well, but to a much smaller degree, rising to 2.28% from 2.265% the week prior. The price of oil increased slightly to $74.37, as the US Dollar strengthened, and Gold traded flat. Treasury yield volatility, as measured by the Chicago Board Options Exchange Treasury Volatility Index (TYVIX), increased to 16.58 from 12.57 last week.

What’s causing the massive surge in long-term US Treasury yields? When we see moves like we saw last week, it’s usually due to one of two possible causes: 1) a sudden spike in inflation fears and the feeling that the Fed is behind the curve and will hike rates more aggressively in the future, or 2) refreshed expectations in prolonged, strong economic growth. This time around, it’s the latter: Rising rates are a combination of strong economic data, higher oil prices, and Fed Chair Powell’s positive comments on the economic outlook. What’s it all mean? Keep reading.

US job creation in September was weak; unemployment rate at lowest level in over 40 years. US nonfarm payrolls rose to 134k in September, a lower level than the 180k anticipated and the smallest gain this year. Meanwhile, the unemployment rate fell to 3.7%, down from 3.9% in August and the lowest since 1969. Wage growth increased by nearly 3% year over year, the fastest pace since 2009, but remains less impressive compared with historically similar periods of low unemployment.  Our take: September’s stall in hiring is likely Hurricane Florence-related and should be taken with a grain of salt; the weakness was more than offset by upward revisions to the prior two months (totaling 87k). As such, the underlying trend for job gains will remain near 200k until wage pressures become more pronounced; something which is occurring slowly but surely over a long period. All told, the report gives the Fed confidence that its steady and gradual rate hiking path is the right prescription for a not-to-hot, not-too-cold pace of economic growth.

US and Canada strike a trade deal dubbed NAFTA 2.0. The US and Canada finally reached a trade deal, just in time for the September deadline. The replacement of the North American Free Trade Agreement (NAFTA), called the U.S.-Mexico-Canada Agreement (USMCA), includes revisions of auto manufacturing practices (i.e., requiring that more vehicles be made in North America) and fewer restrictions on US exports of dairy products to Canada. The new trade pact alleviated some of the uncertainty around trade and quelled the threat by the US that it might place tariffs on the auto exports of Mexico and Canada. The USMCA is expected to be signed by the end of November, and the US Congress is expected to vote on it in 2019.

But what about China? The pressure is now firmly on the US and China to strike a deal, which we don’t expect to see for months despite last week’s events. As we’ve stated ad nauseum, our bottom line is that the impact of the trade war with China is negligible and manageable. The US is unlikely to see a big hit unless the stock market takes a much more negative view of the trade war than what has been seen thus far. China is ultimately more exposed and is already trying to offset the economic hit from tariffs with easier monetary and credit policy – proof that they’re feeling the pain on a much broader scale than we are.

US services-sector activity at the highest level on record. The Institute for Supply Management (ISM) non-manufacturing index rose to 61.6 in September, the highest level on record, eclipsing the prior high in 2008, indicating that US activity within the services sector is expanding. To put the data into context, most of the new jobs created in the US in September were in the services sector, and the news added a tailwind to the massive moves we saw in Treasury yields last week.

What to Watch This Week: The recent spike in Treasury yields will set the tone for the coming week. With the U.S. bond market shut today for Columbus Day, we’ll have to wait until Tuesday to see if the drive higher in yields will continue.

The theme of this week’s economic calendar is inflation, with the Producer and Consumer Price indexes, import prices and consumer sentiment (read: inflation) expectations scheduled for release late in the week, all of which which will indicate whether rising wages are translating into more widespread price pressures. These same, inflation-related indexes came in on the soft side last month, hence we’ll be tuned-in to see if September’s results will show more of the same. We expect them to.

Federal Reserve officials will again be out en-masse in the coming days, making official speeches in support of the Fed’s steady and gradual path of rate hikes.

Take-Away: Last week’s spike in Treasury yields tells us that markets are finally warming up to the Fed’s projected path of at least three more 0.25% rate hikes. Markets are also changing their tune on the yield curve, now beginning to believe that the Fed’s future hikes won’t invert it; a stamp of approval of sorts that America’s growth and inflation outlook is sustainable for longer than previously thought. As long as markets don’t run away with themselves and overshoot via large, sequential spikes in yields and/or a massive equity market sell-off, the Fed’s confidence to continue hiking will only solidify.

In the meantime, we’re watching interest rate volatility intently for any signal that last week’s hiccup in rates might develop into something more serious. 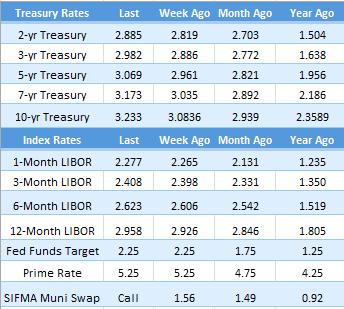 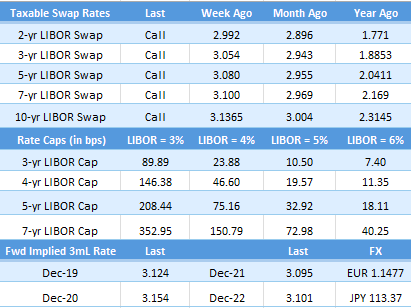 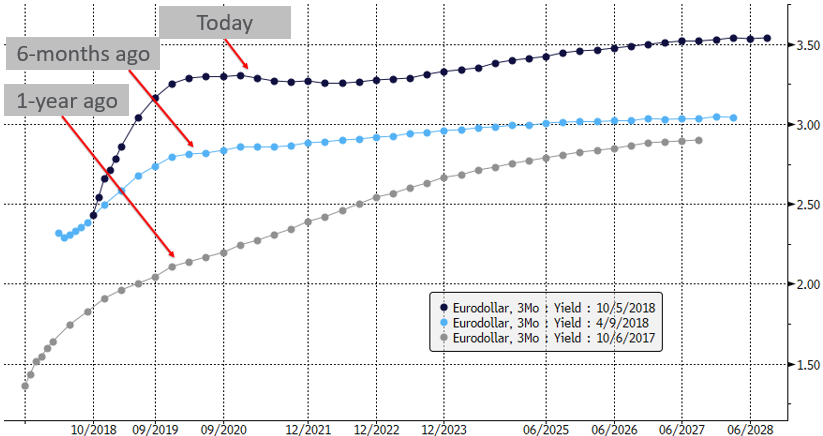 Click here for more DL Reports
Fed Hikes to Continue Well Into 2019 Will the Fed Blink in Response to the Recent Market Tumult?
Scroll to top