Last Week: Interest rates fell as equities recouped some of the ground lost last week amid the breakdown in US-China trade talks. The yield on the US 10-year Treasury note continued to decline, falling to 2.40% from 2.44% a week ago. 1-month LIBOR followed suit, falling 1 basis point to 2.44% (note that the 10-year Treasury yield and 1-month LIBOR are at nearly at the same level – an opportunity? Perhaps. Keep reading for an analysis). Oil rose $1 to $63.00, while the US Dollar weakened and Gold rose. Treasury yield volatility ended the week about where it started at 4.10, after rising to 4.40 early in the week on the back of the US-China tariff news cycle.

Rate caps are on sale. As we’ve said previously, the combination of falling interest rates, muted rate volatility and flattening yield curves presents an opportunity that hasn’t been seen in years: ultra-cheap interest rate caps. As an example, a $30M, 3%, 3-year rate cap cost $340K six-months ago, $265K a month ago, $43K a week ago, and $36K now. How to best take advantage of the situation? Consider buying a rate cap now if you’re: 1) Facing a loan extension and need to replace the original, but soon to expire rate cap, 2) Planning on closing a new loan in the next 60 days that requires a rate cap, 3) Partially unhedged on an existing loan, 4) Open to the idea of putting on a strategic hedge for your floating rate debt portfolio. Contact us for pricing and structuring ideas.

US-China trade spat entered a new, drawn out phase. After President Trump United hiked levies on Chinese imports amounting to $200 billion, China retaliated by announcing it will hike existing 5% to 10% tariffs to between 10% and 25% on June 1st while exempting commercial aircraft and crude oil. With no near-term meeting planned between the two nations, expectations of a near-term resolution are low. However, President Trump and China’s president, Xi Jinping, will meet at the G20 summit in late June. Trump has now threatened to impose a 25% tariff on the balance of China’s exports to the US. We expect the implementation of any new tariffs by US officials to be delayed and softened, as the Trump administration seeks to avoid shocking consumer and business sentiment with abrupt changes in the prices of imported Chinese goods. All told, the conflict will drag on as any increased pressure on China will be phased in over a long period of time. In the meantime, markets will hang on every news headline, rates will remain subdued and we’ll pay close attention to business and consumer confidence data for hints of a retreat in business investment and/or consumer spending.

US economic data were mixed; China’s weak. US data showed that retail sales were little changed in April after a big upside surprise in March and that industrial production declined by a modest 0.5%. More forward-looking manufacturing surveys in two US Federal Reserve districts were more upbeat, however. On the flip side, economic data out of China was uniformly weak despite significant economic stimulus in recent months: retail sales grew at their slowest pace in 16 years in April, as industrial production and fixed asset investment were also well below expectations. Despite the notable contrast in US-China economic performance, we always wonder: Can you really trust any economic data coming out of China? After all, the internet and news media is censored, and it’s been speculated for years that the same government manipulation occurs in economic data releases as well. Something to consider.

What to Watch this Week: Your main focus in the days ahead should be on the degree to which the Fed is writing off recent economic weakness as “transitory,” and how vulnerable America’s economic outlook is to trade tensions.

On the data front, Friday’s report on April durable goods orders will provide a glimpse into how producers are working through a multi-quarter, trade tariff-driven inventory overhang. With trade tensions escalating just last week, it’s way too early to see any impact in data measuring activity in April. The longer elevated trade-tensions linger, the cloudier the economic outlook will get, and the greater the downward pressure on interest rates.

Fed officials will again be out en masse this week, including a keynote address from Chair Powell this evening. Markets will be listening intently for any commentary on recent market gyrations following the escalation of trade tensions, particularly as they might lead the Fed to abandon its “patient” stance toward hiking or cutting interest rates. While fun to watch, we doubt Fed commentary will alter rate’s direction this week.

Lastly, the minutes of the last FOMC meeting will be released on Wednesday and will serve to provide more clarity on just how many Fed officials believe that the recent soft patch in both economic activity and inflation is transitory. We’re guessing pretty much everyone’s on board, and that the Fed’s “patient” stance is stable for now.

Take-Away: With many fixed interest rates across the curve at/near/or below floating rates, we’re being inundated with inquiries asking, “Should I just fix my rate and forget it?”. The question is real and justifiable: With 1-month LIBOR at 2.44%, and a 10-year bank swap rate at 2.20%, it seems like a slam dunk to borrow at a fixed rate or borrow floating then fix the rate with an interest rate swap, no?

Hold your horses. Trust us when we say that, in general, the worst time to borrow fixed (or fix a floating rate with an interest rate swap) is when fixed rates are below floating rates.

Historically the fixed-below-floating dynamic is a temporary anomaly; if it persists long enough, the Fed will eventually cut rates to correct it. If you fixed your rate before the Fed cuts, then you miss out on floating rates going even lower. Further, interest rate derivatives (e.g. swaps, rate caps, collars) can manage interest rate risk far better than your business operations can. Let’s imagine that you fixed your rate, an economic downturn hits (a real possibility in this economic environment) and your business suffers as a result. That fixed interest expense begins to hurt. It’s far more difficult, and takes far longer to draw down inventory, or cut expenses in the business to offset the fixed interest expense than to have set up your financing such that financial derivatives do it for you.

Bottom line – Instead of deciding on fixed vs. floating on a particular loan, smart borrowers look at their entire debt portfolio and strike a balance between risk and opportunity cost. While one may feel that fixing is a more advantageous strategy given where rates are today, there are many variables to consider, and every business is unique. All told, it’s an art, not a science. Want to gain the tools you need to heighten your fix-versus-float analysis? Contact us. For a primer, read: The Fixed Versus Floating Interest Rate Conundrum: 5 Factors to Consider When Choosing Your Mix 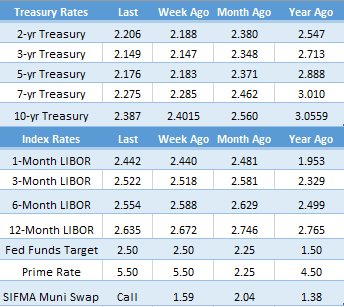 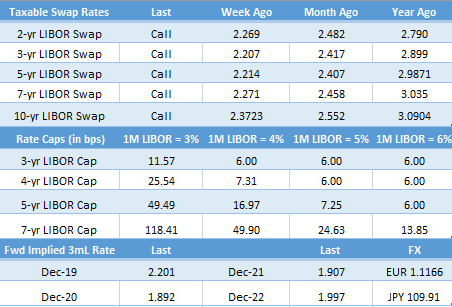 Click here for more DL Reports
A Future Without LIBOR: Are You Ready?

Impact on Rates: Lessons from the Trade War So Far
Scroll to top