Last Week Recap: Interest rates and equities were mixed last week, with key interest rate indexes moving in opposite directions joined with an equity market that continued to post record highs. Falling oil prices – trading near seven-month lows –  continue to be a growing cause of concern, slipping to $42.65 a barrel on Friday from $44.70 a week ago. The yield on the US 10-year Treasury note fell to 2.14% from 2.18% the week prior while 1-month LIBOR increased slightly to 1.22% from 1.21% over the same period. The US dollar fell and Gold rallied. Volatility, as measured by the Chicago Board Options Exchange Volatility Index (VIX), declined slightly to 10.6 from last Friday’s 10.9, still near historic lows.

Brexit talks underway. Negotiators from the United Kingdom and the European Union met in the first formal Brexit negotiating session. The one breakthrough from the talks was the UK’s acquiescence to EU demands that the divorce bill must be settled before the EU begins to negotiate a new trade arrangement. Negotiations are looking good so far. Why should you care? Europe and the UK are the 2nd and 5th largest economies in the world, respectively. The success of the Brexit negotiations have an absolute impact on US bond yields. The more contentious the negotiations become, the greater influence they will have on putting a lid on US interest rates.

This Week: The calendar is light, and will mostly serve to set markets up for the big, important data on tap for next week, June’s jobs report.  Fed Chair Yellen is speaking again, in London this time, on Tuesday. Given that there is such a wide divergence between what the Fed is doing (hiking in the midst of nascent inflation) and what the market thinks it should be doing (not hiking at all), markets will listen closely for further guidance regarding the timing of either future rate hikes or balance sheet adjustments. Yellen is joined by five other Fed officials who’ll be speaking officially in different US locations.

Gauges on personal income, spending and consumer confidence – the data highlights of the week –  will likely show that consumer activity is indeed rebounding, but only at a moderate pace, and that inflation is backsliding. As such, once this week is done, markets will likely stick to their conclusion that the Fed doesn’t need to rush in hiking rates further this year.

Take-Away: Consumer purchases drive 2/3rds of US economic activity, and as the consumer goes, the economy goes.  What inspires the consumer to buy is their attitudes toward their employment and future income prospects. After jumping post-election to highs not seen since 2004, consumer attitudes are now being swayed by the lack of definitive, key policies on healthcare reform, regulation, and personal tax cuts. The erosion in consumer’s happy thoughts have been offset somewhat however by low gas prices and rising stock market valuations.

If consumers are now easing off the throttle, inflation pressures will continue to moderate, pushing out any need for additional rate hikes until late in the year, at soonest. As such, we doubt we’ll see notably higher interest rates across the curve this year, with the 10-year Treasury wrapping up 2017 well below 2.75% at the highest. Recent events continue to confirm our belief that we’ll see the next Fed hike in December. 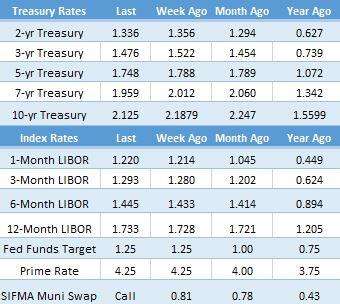 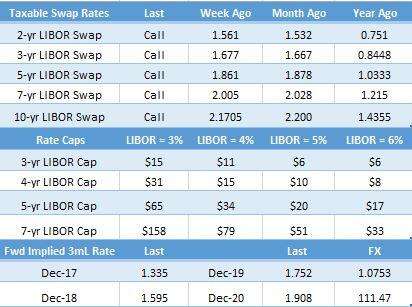