Last Week: Interest rates were mixed, and equities were sharply lower on the week amid concerns over an uptick in COVID-19 hospitalizations in several states around the country. The yield on the benchmark US 10-year Treasury note declined a whopping 22 basis points to 0.70%, while 1-month LIBOR rose two basis points to 0.20% after commentary from Fed Chairman Powell sparked concerns that the economic rebound is further out on the horizon than most expect, and on an uptick in market volatility. The price of a barrel of crude oil fell $3 to $36.26, as the US Dollar and Gold both rose. Treasury yield volatility, a key driver of the cost of interest rate caps and swaptions, jumped to 5.85 from 4.17 this time last week.

Defeasing is proving to be a useful tool for some borrowers in this low rate, high risk environment. For insight into why, see our recent DL Report, Defeasance is Shark Repellent.

It’s official: We’ve been in recession since February. The Business Cycle Dating committee of the National Bureau of Economic Research, the arbiter on recession dating in the US, declared that the economy has been in recession since February. Globally, the World Bank estimated that the economy will shrink 5.2% worldwide in 2020, one of the four worst downturns in 150 years and the worst in eight decades. The only global crises more severe were the Great Depression and the downturns following the two world wars.

Fed to markets: We will do whatever we need to, for as long as it takes. While taking no new actions on monetary policy during its official meeting last week, the Fed’s Federal Open Market Committee (FOMC) adopted a more cautious stance, suggesting interest rates will remain near zero through the end of 2022. Fed Chair Powell said that the FOMC is” not even thinking about thinking about raising rates” and estimated it would take nearly three years for the economy to return to pre-virus levels of activity. Further, the Fed expects the US economy to shrink 6.5% in 2020 before rebounding 5% in 2021. Assuming the economy contracts by 37% in the second quarter, as we expect, US GDP will need to recover by a roughly 13% rate on average in the second half of the year to achieve the Fed’s forecast of -6.5% for the full year. No matter how you disperse the losses, it looks like a long road to recovery.

Curve sculpting off the Fed’s table until September. During the post FOMC meeting press conference, Chair Powell clarified the Fed’s stance on the controversial concept of curve sculpting.   Evidently the FOMC discussed asset purchases and forward guidance and reviewed other countries ‘experiences with curve sculpting but wants more information about the trajectory of the pandemic and the economy before making a final decision, which now appears likely in September. If it employs curve sculpting at all, we’d expect the FOMC to cap the front-end of the yield curve, Treasury yields out to 5-years or so, and that the capping of longer term yields – like the 10-year Treasury – is unlikely. If there is a robust economic rebound from ultra-low levels in the coming quarters, expect the 10-year Treasury yield to top 1% by year’s end, and approach 1.50% by the end of 2021. Short term yields will remain anchored near all-time lows, regardless of any recovery.

The Fed’s “Dot Plot” is more useless now than ever. Part of the Fed’s Summary of Economic Projections (SEP), the Dot Plot, a heavily scrutinized graphic, provides financial markets with an indication of where each Fed official thinks rates will be in the future. Many of our peers analyze the Fed’s dot plot to no end, using it as a tool to predict where interest rates are headed. We think the dot plot is hogwash and ignore it. Why? The lack of clarity regarding what the Fed is trying to accomplish with its forecasts.

The dot plot lacks a key ingredient for its usefulness as being a real predictor of interest rates: The Fed’s degree of confidence in its forecasts, aka a “confidence interval” in statistics-speak. To top it off, the Fed has purposefully done a poor job helping interpret it over time. Especially so now, focusing too heavily on the dot plot puts one at risk of losing sight of the big picture. Given the future of sub-par inflation and sky-high unemployment we are all facing for many months to come, the Fed will lean on non-traditional tools and guidance, rendering the dot plot even less meaningful than in times past – focus on it at your peril. Want more on the dot plot? The Fed will explain it to you here.

Improving consumer attitudes fueled hopes of recovery. The consumer sentiment index for June posted its second consecutive monthly gain. The gauge increased to 78.9 from 72.3 prior, beating expectations for a rise to 75.0. The move reflects an uptick in both the consumer’s current state and expectations in the future as the economy reopens and millions of Americans return to their jobs. Do not be fooled though, wishful thinking and uncertainly surrounding the outlook for the economy and jobs remains high. While the state of the consumer is indeed improving, it is doing so from ultra-low levels, and is still seriously depressed. This suggests that a rebound in the key driver of economic growth – consumer spending – will be limited for a long while yet due to massive job losses and tepid wage growth.

What to Watch This Week: The data calendar in the coming week will reflect recent efforts at reopening the economy, and the ensuing positivity it brings. Partial rebounds in retail sales, industrial production and housing starts for the month of May are expected from pent-up demand, following deep plunges at the peak of the crisis. In particular, a sharp improvement in spending on autos and gasoline is expected, while food services should show signs of continued struggle as restaurants are among the last businesses to fully reopen. June survey data, such as the Empire and Philly Fed manufacturing gauges, as well as the NAHB builders’ optimism index, will provide a sense of the recovery in the first half of June. While positive, we doubt the data will be enough to fuel another burst of optimism, given the elephant in the room: ongoing concerns about the economy’s ability to bring back jobs.

We continue to stay focused on weekly jobless claims data to glean a sense of the voracity of the economic recovery; while jobless claims should continue their downtrend this week, layoffs are still massive. Bottom Line: Expect a steady stream of mixed economic data; it will take time to discern the true pace and timing of the recovery.

On the event front, Fed Chair Powell will hammer home the Fed’s whatever-it-takes approach to spurring a speedy comeback of American jobs during his two-day semi-annual testimony before Congress which begins Tuesday. We will be watching for any comments by the Fed Chair about what additional stimulative fiscal programs he feels are needed from Congress and the President. While we expect Powell to reiterate more is needed, we doubt he will get specific.

Big Picture: On the cusp of a breakout higher a week ago, yields have been reeled back into familiar territory after Chair Powell’s comments reminded markets just how slow and painful the economy’s revival from the pandemic may be. Looking out over the long term, the Fed’s intention to keep rates near zero through 2022 will keep Treasury yields out to 5-year maturities close to their current levels. But longer-term interest rates – like the 10-year Treasury – are likely to rise on improvements in the economic outlook and higher inflation expectations. Even though the Fed continues to buy Treasury bonds to help keep yields low, its efforts will be overwhelmed by the amount of supply coming into the market from the US Treasury. The result? A steeper yield curve.

The question to ask yourself now: How can I best position my company for the future given the ultra-low rate environment? Smart borrowers are actively planning now – ask us how. 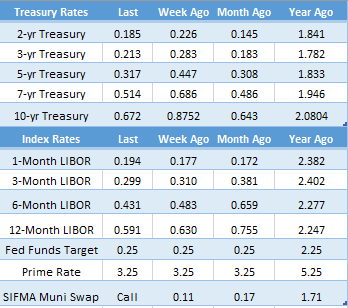 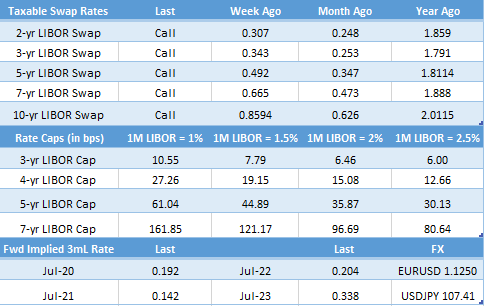 Rates to Trade Range-Bound Amid Bumpy Recovery
We use cookies to give you the best web experience. If you continue to use this site it is deemed you consent to this site's use of cookies.OkPrivacy policy
Scroll to top