Last Week: US interest rates fell, while equities were little changed on the week as drifting markets searched for clues on when and how much the Fed will cut rates. The US 10-year Treasury note yield declined 8 basis points to 2.05%. 1-month LIBOR fell 5 basis points to 2.2611%.  Oil fell nearly $5 to $55.60, as the US Dollar and Gold both wrapped the week about where they started. Treasury yield volatility remained muted, falling slightly to 4.28 from 4.38 this time last week.

Fed’s PR gaffe sparked false expectations of a larger rate cut. It was a classic case of too-much-information. Comments made last Thursday by two senior Fed officials raised expectations that it will cut rates aggressively at its meeting at the end of this month, citing the need to act quickly as economic growth slows. In the wake of the comments, the probability of a 50-basis-point rate cut this month surged to 70%, based on futures markets. In an effort to rein in the market’s exuberance, the New York Fed issued a statement late on Thursday to allay speculation, saying the remarks were academic in nature and not meant to address the present situation. Are you confused yet? Us too. After speaking very little publicly through the 70’s, 80’s and 90’s, the Fed’s communication policy over the last 15 years or so seems to frequently yield unintended results. Our recommendation: Talk less. As of this writing, futures markets are fully pricing in a 25-basis point rate cut on July 31st, but only a 41% probability of a 50-basis point cut that day. The Fed’s seeming disposition to cut rates at its next meeting (aka a “dove” versus a disposition to hike rates, called a “hawk”) is all but guaranteed.

US-China trade talks remain bogged down with no end in sight. Negotiations between the US and China were held by conference call last week but no plans for a face-to-face meeting have been announced. The two sides remain miles apart, as the US pushes back against China’s state-capitalism model and China stands its ground in maintaining access to the US market for companies with close ties to its military. With the 2020 Presidential election season looming, hopes are fading fast that a comprehensive agreement can be struck beforehand. We expect the trade war to drag through the end of the year, and that in the near term, the US will impose tariffs on an additional $325 billion in Chinese exports to the US. Such an event will keep markets on edge and add momentum to interest rates’ steady and gradual moves lower.

US economic data painted a solid picture, but concern of a growth slowdown lingers. Incoming data have been, overall, more positive. Growth in consumer’s consumption – a key driver of the economy – accelerated to more than 4% annualized in Q2. As a result, the growth rate of final sales to consumers from domestic purchasers, arguably a better gauge of the economy’s underlying strength, accelerated from 1.6% in Q1 to a one-year high of 3.4% in Q2. Retail sales and manufacturing output data for June showed that retail sales growth came roaring back in Q2 after a particularly weak start to the year. US manufacturing output, in recession for most of the first half of the year, seems to be stabilizing. All told, recent data suggest that US economic growth might not be quite as bad as previously feared, begging the question: Does the Fed really need to cut interest rates? For a deeper analysis, see the “Take-Away” section below.

Many of the world’s central banks have shifted to rate-cut mode. With the Fed and European Central Bank expected to cut rates in the coming weeks, the Bank of Korea surprised markets on Thursday by cutting its repo rate for the first time in three years, by a quarter of a point to 1.50%. Central banks in Indonesia and South Africa cut rates as well amid declines in economic growth. This adds to the “stand pat” or “cut” disposition of most of the worlds central banks, notably Canada and Australia. Such a position lends encouragement to the Fed that its safe to cut.

Potential political battle on the US debt ceiling looms large.  Remember the last time parts of the US government had to be closed for lack of funding? That was fun. Once again, the US government is projected to run out of cash in early September. With Congress about to recess for the month of August, time is running out for congressional Democrats and the White House to reach a compromise that would raise the statutory debt cap while funding the government for the next two years. The good news? Political leadership from both parties reached an agreement to fund the government late last week. Still to be worked out are offsets to increases in discretionary spending meant to limit the growth of the federal budget deficit. Both sides hope to reach a final agreement imminently. The fly in the ointment? Robert Mueller’s testimony to Congress this Wednesday. While Mr. Mueller’s testimony probably won’t include any earth-shattering revelations, it is sure to worsen the already hostile relations between President Trump and House Democrats. In such a polarized environment, there is the risk that one side or the other balks at signing a budget deal at the last moment, eroding support for rates in the process.

What to Watch this Week: While political theater will likely steal the spotlight in the days ahead, what you should really be paying attention to is the first look at Q2 GDP, set for release on Friday. Important on its own merits, the gauge is even more so this time around due to the likelihood of it reinforcing expectations that the Fed will cut interest rates July 31st. Although we believe Q2 GDP growth slowed markedly to ~1.8% (far lower than Q1’s 3.1%), driven mostly by a normalizing of unusually high, trade war-driven business inventories, this week’s reading will do little to alter the Fed’s planned 0.25% rate cut.

The only other economic release of note is June’s durable goods figures. We anticipate a modest fall in orders, mostly due to Boeing’s 737 Max-related woes.

Take-Away: Despite the Fed’s “data dependent” mantra, Fed officials have continued to hint that an interest rate cut is coming later this month even though the incoming data have been, on whole, more positive. The situation begs the question: Does the Fed really need to cut rates?

Bottom line: If the intent is to cut purely for “insurance” reasons; that is, to cushion the economy from what the Fed sees as building storm clouds, then yes. Here are a few reasons why the Fed is making the right call.

In short, the future seems to be one of low and falling interest rates, especially so if the Fed’s doves follow through with its 0.25% July 31st rate cut, which we expect. Is it time to borrow at a fixed rate? Perhaps. But with rates likely to fall from where they are now, many smart borrowers choose to float, knowing that they can employ interest rate hedges at any time should rates begin to move unexpectedly against them. 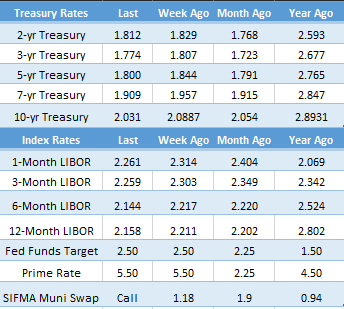 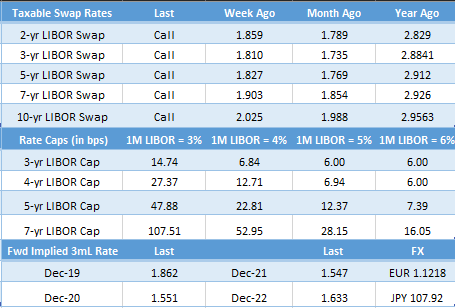 Rates are Low and Falling: Should You Borrow Fixed or Floating?
Scroll to top