Too Far, Too Fast

What You Missed: Interest rates leapt higher across the curve and equities struggled as a better-than-expected jobs market report assured a Fed rate hike in March. The yield on the US 10-year Treasury note jumped to 1.93% from 1.78%, and shorter-term yields jumped to levels not seen since February 2020. The price of a barrel of West Texas Intermediate crude rose past $90 for the first time in nearly 8 years, settling at $92.31, while the US Dollar weakened, and Gold strengthened. Treasury yield volatility, a key driver of the cost of rate caps and other option-based derivatives, rose all week, settling at 3-month highs.

Blowout jobs report paves the road for rate hikes. America’s job creation engine motored along stronger than almost anyone expected last month, shrugging off surging cases of Omicron that were thought to have sent millions of workers to the sidelines. Nonfarm payrolls, the single most impactful piece of economic data on interest rates, surged by 467k (150k estimated) for the month while the unemployment rate edged higher to 4% (3.9% expected). As importantly, the jobs data for November and December were revised higher by a whopping 709k – December jobs up to 510k from 199k, and November jobs up from 249k to 647k. That shows that the already solid momentum in the jobs market was in fact running much stronger than what real-time data were showing.

Other details of the data showed that average hourly earnings – aka wages – surged 5.7%, from an upwardly revised 4.9% the previous month. This pace of wage increases follows a solid rise in December, consistent with record job openings, and ultimately signals that the red-hot labor market is stoking wage pressures and is contributing to inflation in the midst of supply constraints.

Our take: The jobs markets was even tighter in January than everyone expected, and all signs now tell us that we’re witnessing the hottest US jobs market in a half-century. For some perspective, there were only a few periods in the past century when the unemployment rate fell below 4% — post-World War II, early 1950s, 1966-’69 (before the wage-price spiral began), early 2000 (the last time the Fed hiked rates by 50 basis points), and 2018-February 2020.

This time around, not only did the omicron wave have little or no effect on hiring last month, but statistical adjustments also show that hiring was substantially greater in the previous two months. Next month’s report will likely be strong as well, consistent with record-high job openings and a diminishing impact from Omicron. It’s a recipe that nearly guarantees the Fed will hike 0.25% in March, and even puts a 0.50% rate hike on the table.

Taken together, the data affirms an obvious trend: The adverse response to Covid is diminishing with each successive virus wave. Omicron seems to produce milder symptoms, more people are vaccinated, and more effective treatment to the illness is available; all factors that are helping to heal the jobs market and give the Fed confidence to slowly pull back the stimulus punchbowl, without fear of snuffing out economic growth in the process. Now that one of the Fed’s dual mandates – job creation – is on solid ground, it’s time to tackle the other – stable prices, aka inflation. The medicine? Less stimulus and rate hikes.

Other major central banks are already on a hiking tilt – is the Fed behind? The Bank of England (BoE) hiked interest rates by 0.25% last week, following a 0.25% hike at its previous meeting, its first back-to-back interest rate hikes since 2004 as the central bank strives to contain soaring inflation. It also began the process of quantitative tightening. Elsewhere, inflation gauges in the eurozone surprised markets, notching a new record high and further pressuring the European Central Bank (ECB) to act to combat it. The news follows other central banks around the world, notably Canada and Australia, who’ve intimated that they’re eyeing rate hikes in coming months.

Our take: It’s a global economy folks, as recent supply chain constraints have proven. With many of the world’s largest economies eyeing a pullback in pandemic stimulus and ultimately rate hikes, the Fed can’t hold out much longer. This dynamic opens the door to Fed rate hikes, and soon.

What to Watch This Week: Now that the Fed can check the box on a solid jobs market, it focuses on battling inflation, knowing that the jobs markets has enough momentum to weather the headwinds of rising interest rates.

The Fed’s subdued inflation forecast implies that it expects inflation to behave similarly to how it did in the last cycle in 2018-’20, when unemployment fell to 3.5% without putting much upward pressure on prices. However, the most recent round of red-hot jobs market data – upward revisions to employment figures, job openings, and the rate at which people are quitting their jobs – suggests that the jobs market may be the tightest in a century.

This, combined with emerging signals that the worst of Omicron has already passed (initial jobless claims, Thurs.) point to the possibility that a 0.50% hike is likely to be under serious consideration when the Fed meets in March. Consumer Price Index (CPI) data, a favorite inflation gauge (Thurs.) will be another influential data point in that decision. With energy and food prices still on the rise, we’re guessing that inflation continued to exceed its average monthly run rate in January but did so at a rate that’s consistent with the Fed’s annual 2% inflation target, allowing it to be comfortable in logging successive, 0.25% rate hikes over the next few quarters.

Finally, despite a high inflation number this week near 7.3%, we expect to be reassured that elevated inflation isn’t causing long-term inflation expectations (Univ. of Michigan Consumer Sentiment Index, Fri.) to become unmoored, giving the Fed yet another green light to hike modestly but methodically.

Big Picture: With the ongoing equity market selloff, Treasury yields leaping to new highs and the short end of forward curves steepened, it’s clear that financial markets fully expect rate hikes, and soon. The big question now is the degree and timing of Fed hikes after its March meeting and what impact they’ll have on economic growth.

The Fed wants to avoid hikes in the midst of a growth slowdown, and risks that it will find itself there at some point later this year. To avoid it, the Fed will likely hike three times from now to the summer, then reassess in mid-summer or the fall. The risk is that by June, higher interest rates and still virulent inflation may erode consumer confidence and spending, the largest contributor to economic growth. For example, rental prices have room to run as existing leases expire and get re-priced. With the cost of shelter comprising nearly a third of the consumer price index, one of the Fed’s favorite inflation gauges, rising rents put upward pressure on inflation while simultaneously diminishing consumer’s discretionary incomes, a dynamic the Fed wants to avoid.

For the first signals that the Fed has gone too far with hikes – or talk of them – look no further than the credit markets, specifically the lowest-quality credits. In fact, it’s already happening. The cost of credit-default swaps (“CDS”), a derivative used to offset credit risk/protect against a company’s default, rose last week, the latest sign credit investors are growing nervous and hedging. Can you blame them? The selloff in financial markets thus far this year has been swift and large, in the top 10% of the last decade, and credit spreads are likely to drift wider in the coming weeks as questions about the Fed’s direction persists.

Talk on the Street: We face an education crisis that has far reaching consequences.  Teachers are leaving for better pay, less stress, and reasonable hours.  A family member and mutual friends who teach have left their jobs.  Teaching was their calling.  Most teachers have a Masters degree and many have student loans.  A typical teacher’s salary ranges from $50k to $75k.  These teachers are getting higher paying jobs, in some cases more than double their salary, in fields that need their multi-tasking, teaching, and higher education background.  People on the street are concerned about how to fill the gap. 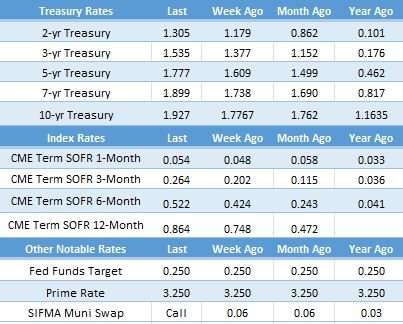 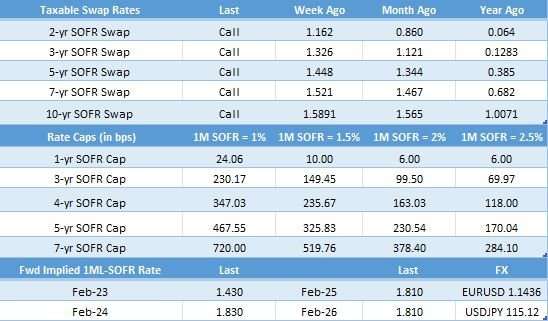 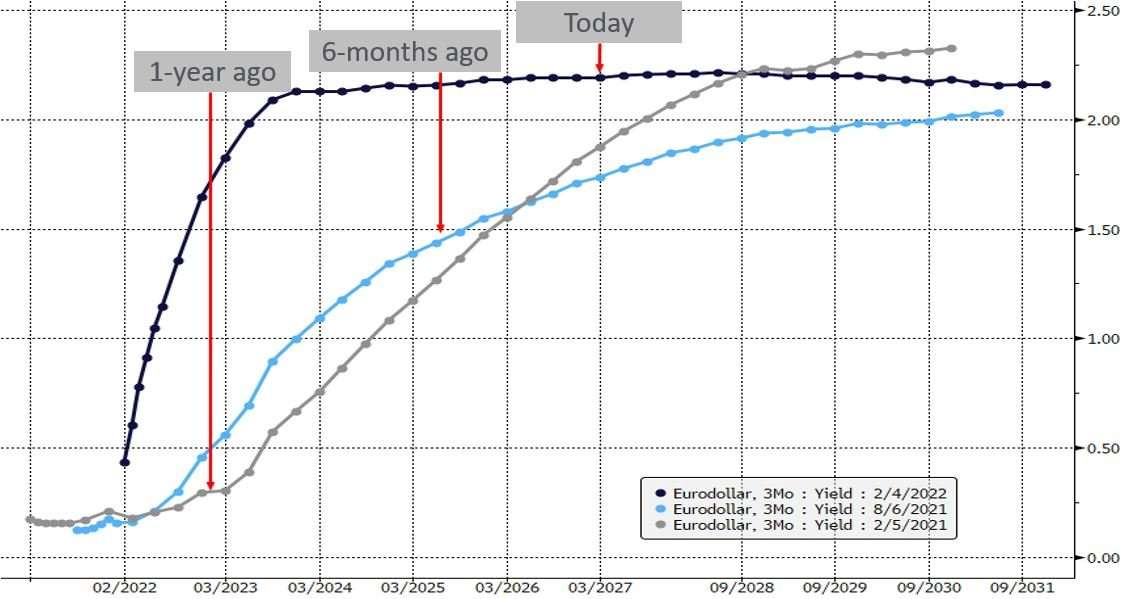 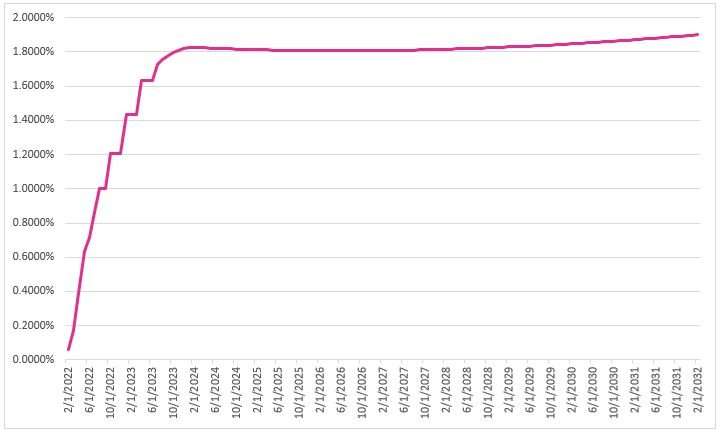 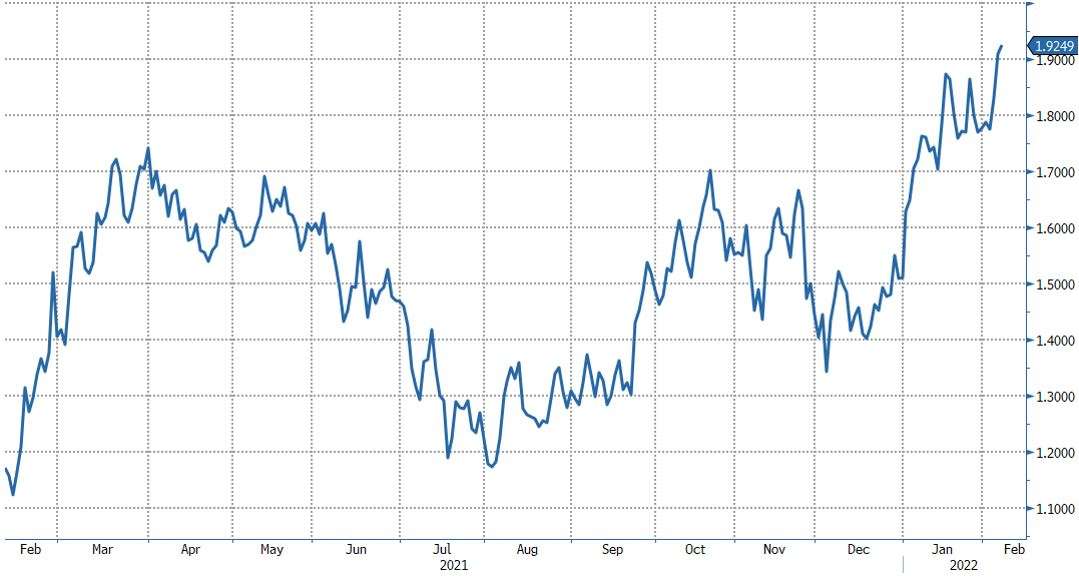