Last Week: Interest rates fell, and equities were little changed as trade tensions dominated financial headlines. The yield on the US 10-year Treasury note slipped 5 basis points to 2.82%, as 1-month LIBOR followed suit, falling to 2.08% from 2.10% the week prior. The price of oil eased off its recent highs to wrap the week at $73.80, slightly lower than the $73.95 high seen early in the week. The US Dollar weakened, and Gold strengthened as knee-jerk trade war fears pushed investors into safe-haven assets. 10-year Treasury yield volatility, as measured by the Chicago Board Options Exchange Treasury Volatility Index (TYVIX) fell modestly for the third week in a row to 3.71 from 3.49 a week ago.

America’s Job Engine Motors on. Surprising many, hiring by America’s businesses topped expectations as unemployment rose from an 18-year low and gains in consumer’s wages unexpectedly slowed. Adding to the positive job-creation picture, jobs gains for May were revised upward. All told, the data showed that there’s still room for hiring to expand, and that the threat of the inflation boogeyman showing up is minimal for now. While encouraging, the jobs picture faces two main headwinds going forward: 1) The intensifying trade war, which threatens to sap economic momentum as businesses curtail both hiring and investment, and 2) A shrinking pool of qualified workers, which could slow the pace of employment gains.

Fed Minutes Re-Affirmed a Gradual Path of Rate Hikes. The minutes from the Fed’s most recent June 13 policy meeting highlighted a debate among policy makers over how many more rate increases would be needed to keep the economy on a stable growth trajectory over the long run. The Fed is juggling the competing forces of a growth boost from tax cuts and additional government spending with the growth-sapping threat of an escalating trade war and a resultant dampening of business investment, the biggest contributor to economic growth in Q1. Despite the risks, Fed officials felt confident in hiking 0.25% in June and concluded that the strong economy and rising but muted inflation warrant more hikes this year. Unless a full blown trade war erupts, which we doubt, the minutes reaffirmed our view that we’ll see two more, 0.25% hikes this year, the next in September, and the last in December-ish.

The US Consumer is high on life. Americans’ sentiment in their financial situation now and in the future approached a 17-year high on increasingly upbeat views of the economy and personal finances, the Bloomberg Consumer Comfort Index showed. Given that the consumer drives 75% of the US economy, where the consumer goes, so goes the economy. Want to make America great again? Go buy something you don’t need.

What to Watch This Week: While the June Consumer Price Index – one of the Fed’s favored measures of inflation – will take the data spotlight in the days ahead, it’s fire will likely be stolen by the ongoing trade-war narrative. With reciprocal tariffs totaling roughly $34 billion being lobbed between the U.S. and China, the focus will now turn toward any escalation, and how such will change the economic outlook via any reduction in business investment and/or slowdown in hiring.

Trade war anxieties are just that – anxieties – and thus far have not materialized in “hard” economic data. While the minutes of the last Fed meeting indicated that some of the Fed districts had reported delayed or diminished capital spending, suggesting that tangible trade-war fallout may be edging closer, we doubt we’ll see evidence of it in this week’s Consumer Price Index data, nor any economic data surveying economic activity in June. It’s just too soon.

Take-Away:  We’re often skeptical of any media coverage, and always skeptical of the financial media, as we have seen time and time again a disposition toward hype. News on the “trade war” is no exception. To cut through the hype, let’s take a quick look at what the current trade tensions could really mean for the economy and interest rates. Before we do, know this: In any protracted US-China trade war, everyone loses.

Scenario 1: $35-$50 billion in reciprocal tariffs and nothing more, as both countries reassure markets that they’re done. Markets barely react. Impact on the US economy? Negligible, at 0.1-0.2% reduction in annual GDP. Interest rates drift lower, temporarily. The Fed stays on its “two more this year” path of hikes in 2018.

Scenario 2:  $50-70 billion in US tariffs, China retaliates in kind. Stock markets fall sharply, creating a knock-on blow to the US economy via falling wealth and higher interest rates. Fearing worse, both countries hold their fire.  Impact on the US economy? Notable, but minimal, with US growth falling by 0.5% annually.  China’s annual growth is dented by just 0.2%, and it sidesteps the knock-on blow to investor wealth by avoiding a fall in its own stock markets, due to their structural insulation from global stock markets. The global economy contracts by 0.2% annually, and the Fed hikes just 1 more time in 2018, choosing to push other hikes into 2019.

Scenario 3:  A true trade war – the US imposes a 15% tariff on all imports, our trading partners retaliate, and global financial markets swoon. US annual growth is dented by 0.8% to 1%, and 0.5% for the rest of the world. Interest rates spike and stay there. China again avoids the stock market dump but sees its growth prospects dim by 0.5%. The Fed doesn’t hike any further in 2018, feeling the markets have done its job, and lowers its rate hike forecasts for 2019 and beyond.

For now, the $35 billion in reciprocal trade tariffs announced thus far are probably worth only about a 0.1% reduction in US GDP growth. Given that the U.S. is presently undergoing a tax cut-fueled growth acceleration, the current trade headwinds merely spark the debate between whether the Fed will hike once or twice more by year-end. While the US-China trade rhetoric could easily escalate, and greater tariffs follow, we believe that calmer heads will prevail, and that we’ll see a minor disruption to financial markets, the interest rate outlook and economic growth, with the Fed hiking one more time this year at an absolute minimum. Regardless of the eventual outcome, get comfortable with thinking about trade wars, as the strong economy will make it less likely the US will feel any immediate economic pressure from the trade fight, emboldening the Trump administration to play trade hardball well into next year. 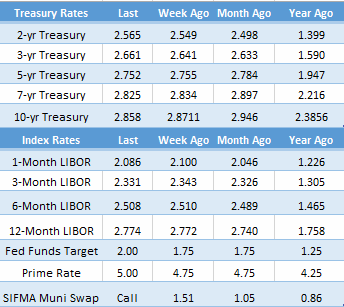 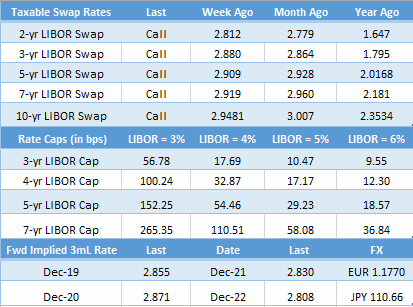 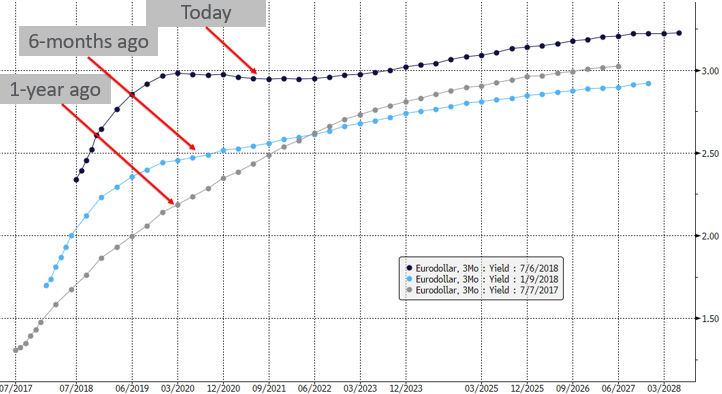