Last Week: Interest rates were mixed, and equities lost ground on the week as trade tensions dominated markets after the US moved forward with tariffs on Chinese goods. The yield on the 10-year US Treasury note held below 3% all week, posting the week’s low of 2.91% late Friday despite strong US retail sales and a more-hawkish-than-expected Fed meeting statement. 1-month LIBOR logged steady gains all week, finishing at 2.0849%, the week’s high, on Friday. Oil edged lower by $1 to $64.80, the US Dollar strengthened, and Gold weakened. Treasury market volatility, as measured by the Chicago Board Options Exchange Treasury Volatility Index (TYVIX) ended the week markedly lower, falling from 4.43 to 3.66.

Fed hiked as expected and signaled there’s more to come. As widely expected, the Federal Open Market Committee (FOMC) voted to raise the federal funds target range to 1.75% – 2% on Wednesday, the seventh hike since the Fed’s tightening cycle began in December 2015. Also, as we expected, FOMC members raised their forecast of the number of rate hikes this year from three to four and increased their economic growth and inflation forecasts. The committee now forecasts that the US economy will expand by 2.8% in 2018, up from a 2.7% projection in March. Core inflation is expected to rise to 2%, up from the FOMC’s prior 1.9% estimate. For us, the most important take-away was Chair Powell’s cautioning markets that they should not read any policy change into its decision, such as a faster pace of rate hikes than what existed before the meeting. The Fed’s slow, steady and incremental path of hikes continues.

White House announced China tariffs, bringing the US and China to the brink of a trade war. The new tariffs on imports would take effect on July 6. A 25% tariff will be imposed on $34 billion in goods imports, with further duties on another $16 billion in imports is under consideration. In response, China said it would charge tariffs of the “same scale and intensity” on goods from the U.S., adding that all trade commitments made during the previous weeks of negotiations are now off the table. Markets have been remarkably tranquil despite the growing trade friction, with many seeing the tit-for-tat duties as part of a larger negotiation that will ultimately end with a comprehensive agreement. While we seriously doubt we’ll get there, a longer-term, worst-case scenario would be an all-out trade war where China could sell down its massive stockpile of U.S. treasuries or devalue the yuan, moves that would send shock waves through global markets. For now, our concern is that the new tariffs will offset the positive impact of tax reforms. Ignoring the trade spat thus far? Do so at your peril, as one of the longer term market reactions of an increase in its intensity will be higher rates.

Growth blossoms in the US but lags elsewhere. Economists are raising US economic growth forecasts for Q2 after a string of strong data releases last week, with forecasts topping 4%. Leading the list was US retail sales, which rose 0.8% in May while April data was revised higher. Small business optimism also improved markedly, reaching its second-highest level ever as small business profits reached record levels, according to the National Federation of Independent Business. Conversely, economic sentiment in Europe took a hit, with the ZEW index  – a gauge of German business optimism  – tumbling to -12.6 in June from 2.4 in May. Chinese data were softer than expected as well, with retail sales, industrial production, and fixed asset investment all coming in below forecasts. A stronger dollar was an upshot of the week’s data, along with several central bank maneuvers. Yeah, it’s all-good, but don’t be swayed as the second-quarter US GDP surge overstates the extent to which growth is accelerating – the pace is due to moderate in the second half of the year. We expect full year US economic growth to come in near 2.8%.

Europe’s Central Bank announced the end to QE but issued dovish guidance. The European Central Bank (ECB) announced that it will reduce the volume of its asset purchase program from €30 billion a month to €15 billion a month starting in October and drop it to zero at the end of the year. However, very dovish guidance on the timing of the first rate hike pushed European bond yields and the euro lower as the bank said it will keep its refinancing rate at -0.4% at least through the summer of 2019. Markets welcomed the pairing of the end of quantitative easing with dovish forward guidance as the combination will likely prevent a significant tightening in financial conditions. Who cares, right? Wrong. The ECB’s decision sapped some of the flattening momentum of the US Treasury yield curve by reducing the incentive for investors to buy U.S. debt.

What to Watch This Week: After last week’s event and data deluge, it’s a light one this week, with housing, trade tariffs and events in the emerging markets serving as the prevailing themes. In addition, a slew of speeches by Fed officials will serve to hammer home Chair Powell’s message that, yes, while the economy is doing well, don’t expect any change in the pace and timing of rate hikes for the rest of the year.

On the data front, this morning’s NAHB Housing market Index showed that confidence among housing builders is holding up despite the rise in mortgage rates.  The acute housing inventory shortage and improving household-income prospects should support growing demand for new homes through the rest of the year, despite tariffs increasing costs for Canadian lumber. Tuesday’s Housing Starts data will echo the positive sentiment, likely advancing in May after a previous dip in April as a tight labor market and pay gains overwhelm the industry-negative labor shortages and higher material costs. Wednesday’s data on existing home sales will keep the positive sentiment rolling as economic growth and labor market strength help solidify the strong correlation between purchases of existing homes and durable goods purchases like appliances and furniture.

Take-Away: US economic growth is surging as consistent household-income gains are spurring consumer spending at the same time that business investment is finally becoming a more significant contributor to growth. As a result, the Fed is leaning toward the possibility of a fourth rate this year, based on the tone expressed at last week’s FOMC meeting and as a means of keeping things in check in a quarter where GDP growth could top 4%.

Even though some are doubtful, we’ve expected four hikes this year for a while now, with the next likely occurring in September and the last at the end of the year, probably in December-ish. Our forecast could be wrecked however by a sudden and pro-longed escalation in global trade tensions and/or an extended inversion of the Treasury yield curve, which has historically served as a precursor to economic recession.   Some speculate the Fed could slow its pace of planned rate hikes to prevent the curve from inverting. We seriously doubt the Fed will be swayed to change its policy stance just because the curve is close to or has, inverted. Why? The Treasury yield curve can be inverted for months before it triggers recession, giving the Fed time to course correct should it choose to do so.  For now, the momentum toward continued curve flattening is clear, with more rate hikes in the cards, key technical support levels crumbling, and measures of curve flattening reaching their flattest since 2007. Confused by it all and need a primer on Treasury yield curves? See our tutorial, Borrowers: The Flat Yield Curve May be Your Friend. 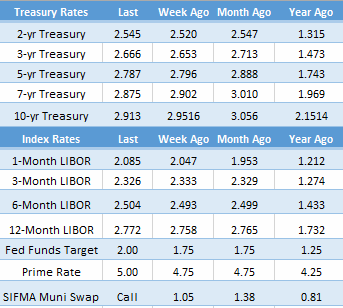 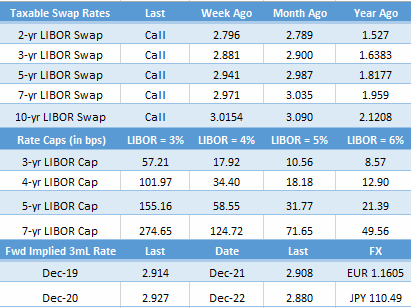 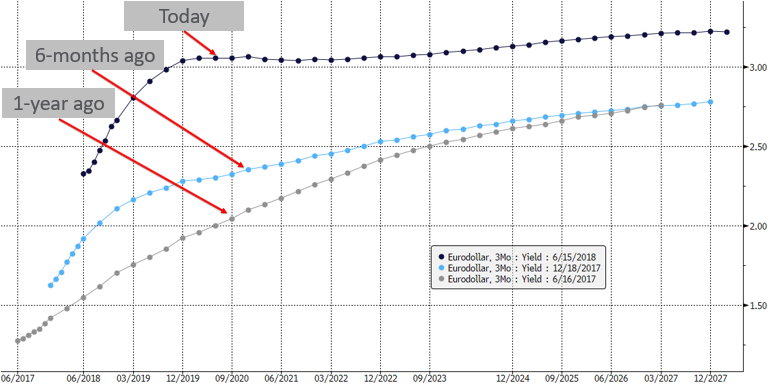 The Once, Recent, and Future Fed
Scroll to top