Last Week: Interest rates were mixed, while equities traded lower on the week due to increasing trade frictions between the United States and China. Yields on US 10-year Treasury notes fell to 2.8135% from 2.8556% the week prior while 1-month LIBOR continued its steady march higher to 1.8750% from 1.8408% over the same period. Oil rose more than $4 to $65.50, the US Dollar weakened as Gold rallied. Treasury yield volatility, as measured by the Chicago Board Options Exchange Treasury Volatility Index (TYVIX), fell to 4.12 from 4.38 a week ago.

Fed hiked 0.25% as expected and signaled two more to come in 2018. In his inaugural press conference, Fed Chair Jerome Powell made it clear that Fed’s walking a high wire between two risks: 1) The Fed hikes too much and keeps inflation from reaching the Fed’s 2% target, stifling economic growth, and 2) The Fed doesn’t hike quickly enough, thus allowing the economy overheat and forcing corrective action to hike rates more quickly, opening the door to a recession. Powell concluded that the Fed is taking the middle ground by planning further, gradual rate hikes amid subdued inflation pressures.  Fed members believe the US economic outlook has strengthened, via upgrades in 2018 GDP growth to 2.7% from 2.5%, a decline in their unemployment forecast to 3.8% from 3.9% and holding their core Personal Consumption Expenditures inflation forecast steady at 1.9%.

Trump slapped trade tariffs on Chinese goods increasing the odds of a trade war. The trade policy issue is alive and well after the President announced tariffs on about $60 billion of imports from China and imposed restrictions on technology transfers and acquisitions in response to unfair trade practices, such as the theft of intellectual property. The tariffs are meant to roughly offset estimates of the value of lost earnings to US companies as a result of forced technology transfers to, and 50/50 joint ventures with Chinese companies in order to gain access to China’s vast markets. China immediately responded with announcements that it will add tariffs of $3 billion on imports from the US and called for a dialogue to address trade conflicts. Equity markets sold off and Treasury yields rates fell to levels not seen in weeks on the news. While certainly newsworthy, we see the President’s $60 billion in tariffs as a tempest in a teapot of sorts, as America’s trade deficit with China was $375 billion in 2017, far larger than the $60 billion in tariffs. As we’ve said before, the trade issue has the potential to cause unpredictable, wild swings in interest rates – ignore the issue at your peril.

What to Watch This Week: The holiday-shortened week ahead is packed with important economic data releases, notable treasury auctions and Fed speeches – a combination that’s sure to keep everyone on their toes right up until the Good Friday holiday.

Economic data of note is Wednesday’ s US Q4 GDP release – which will uniquely include data on economy-wide corporate profits –  and should paint a picture of a solid and improving business environment through 2017’s end. 2017? That’s so last year, who cares, right? Wrong: solid and improving corporate profits is an important signal that increased hiring and improving investment trends should continue in the quarters ahead, providing assurance that any economic recession is in the distant future. Elsewhere, Thursday’s Personal Income and Spending report is the most important data release for the week, as it will shed more light on the state of retail sales and if its tumble in January and February will continue, and if the slump could spread to other types of consumer spending, the lifeblood of the US economy.

The final event to watch this week is how bond markets swallow the US Treasury’s largest-ever, $295 billion in bond auctions, and how such massive bond issuance within the span of a single week will impact Treasury yields, which have been range-bound recently after setting multi-year highs this year. Will Treasury yields awaken from their recent lull to march higher anew? No. Sure, we could see Treasury yields climb higher, but we doubt we’ll see any new highs anytime soon as the threat of a trade war, an unpredictable Trump administration and equity market volatility spurs Treasury buyers into action and keeps new highs at bay.

Take-Away:  As we forecasted, the Fed wants you to expect just two more 0.25% rate hikes this year, at most. At last week’s post-Fed meeting press conference, Fed Chair Powell went out of his way to soften the over-hyped possibility of four rate hikes in 2018 as conveyed by the steeper ‘dot plot’.  Powell stressed the Fed can still afford to take a ‘middle ground’ in hiking rates, stating that “the relationship between changes in slack and inflation is not so tight” and that so far there is “no sense in the data that we are at the cusp of an acceleration in inflation”. With respect to our latest views on US interest rates, we reaffirm our forecast of 3.00% for 10-year Treasury yields by the end of this year, and 1-month LIBOR near 2.25% over the same period. 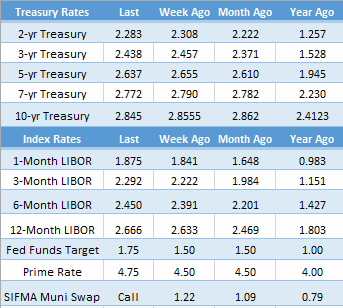 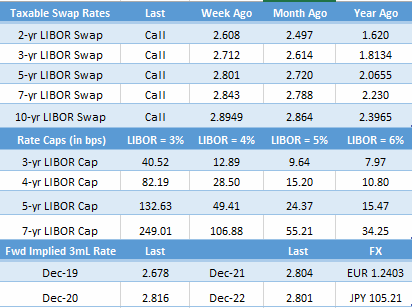