Last Week: Interest rates fell, and equities were little changed as trade tensions eased somewhat. The yield on the US 10-year Treasury note slipped 5 basis points to 2.85%, as 1-month LIBOR fell to 2.0902% from 2.1029% the week prior. The price of oil jumped $6.50 to $73.85, as the US encouraged its allies to halt oil imports from Iran. The US Dollar traded flat and Gold fell. 10-year Treasury yield volatility, as measured by the Chicago Board Options Exchange Treasury Volatility Index (TYVIX) fell modestly to 3.72 from 4.02 a week ago.

US-China Trade tensions abated. After ramping up pressure on international trading partners in recent weeks, the White House made efforts to tone down the rhetoric last week. Plans to limit Chinese investment in US-based technology companies were scrapped in favor of more rigorous reviews by the Committee on Foreign Investment in the United States, an inter-agency body that reviews transactions for their national security implications. Markets were bolstered by the administration’s decision to back away from firm numerical limits on investments from China in favor of a more flexible approach. Roughly $35 billion in tariffs on select Chinese exports are set to come into force on Friday, leaving negotiators a narrow window to negotiate. While we continue to believe the risk of an all-out trade war with China is low, the worst-case scenario is where China sells down its massive stockpile of U.S. Treasuries – causing rates to rise –  or devalues the yuan, both moves that would send shock waves through global markets. For now, ongoing uncertainty on which way it will go is skewing investor’s positioning as they seek protection from negative impacts to the economy and corporate profits. Ignoring the trade spat thus far? Do so at your peril, as one of the initial market signals of an increase in its intensity will be higher rates.

It’s not all about China. Canada announced that it will place $19 billion of tariffs on American imports yesterday in retaliation for US steel and aluminum tariffs. On another front, US Treasury secretary Mnuchin denied rumors that President Trump is considering pulling the US out of the World Trade Organization.

Inflation hit the Fed’s target. The Fed’s preferred inflation measure, the core personal consumption expenditures price index, reached the central bank’s 2% target. The Fed expects the inflation gauge to mildly overshoot its target in coming months. While the news backs the case for more aggressive tightening from the Fed, we won’t see any change in their planned “two more” rates hikes this year.

US GDP revised lower. Q1 US gross domestic product was revised down to 2% from 2.2%. Second quarter growth is expected to be much stronger, with some estimates above 4%, partially due to a narrower trade deficit.

Record M&A activity in 2018. Global mergers and acquisitions surged 64% in the first half of 2018 to a record $2.5 trillion, edging out the prior record high of $2.3 trillion in the first half 2007. Deals in the US accounted for $1 trillion of the total. Given that a surge in M&A tends to be a late-cycle phenomenon, investors may view the news skeptically. Meanwhile, the US corporate debt load hit a record 6.3 trillion. Conversely, companies have a record amount of cash on balance sheets to service debt, though most is concentrated in relatively few entities.

What to Watch This Week: Despite the holiday-shortened week ahead, there is a plethora of data and events for markets to chew on. Friday’s June jobs report will be the key economic data point to watch, and markets will be scouring the number of new jobs, wage detail and unemployment data contained within it for potential evidence of any postponement of hiring, investment, and other decisions by business as they worry about deteriorating economic conditions due to trade tensions. While such a scenario could materialize in jobs data later in the year, we doubt it will be seen in June’s report given the recent strength in sentiment by US corporations.

While recent economic data hasn’t yet shown any negative fallout from the ongoing trade spats, economists and the Fed suspect the recent economic euphoria could fade because of it. As such, in addition to Friday’s jobs report, markets will look for clues in other important data releases on the health of the manufacturing and services sectors of the economy, scheduled for Monday and Thursday respectively. In the background, everyone expects Q2 GDP to be strong, thus any positive, upside surprises in this week’s data will be downplayed, whereas any weakness in the data releases will feed into the trade-anxiety, negative economic feedback-loop narrative that’s dominating markets.

Markets will also have a keen ear out throughout the week for any retaliatory trade announcements from China as the US is poised to announce tariffs on $34 billion of Chinese imports on Friday.  While we have mostly dismissed the trade spat and believe it will have a minimal impact to the US economy and the long-term direction of interest rates, any significant ramp up in rhetoric and tariff threats from either side this week could change our mind.

Take-Away: Despite lackluster US economic growth in Q1, Q2 is widely expected to be a blowout quarter for the economy, as contributors to growth fire on all cylinders and tax cuts provide a tailwind to the growth trajectory. As the current expansion enters its 10th year, we expect 2018 to be the fastest year for growth thus far.

The state of the economy gives the Trump administration even greater confidence to engage in trade conflict brinkmanship. While the tariff actions to date are probably worth only about a tenth of a percentage point on full-year GDP growth, any escalation in rhetoric or action could blunt prospects for future growth – and successive rate hikes by the Fed –  significantly. 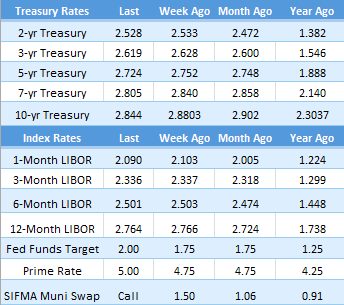 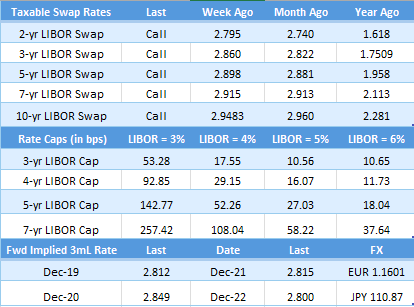 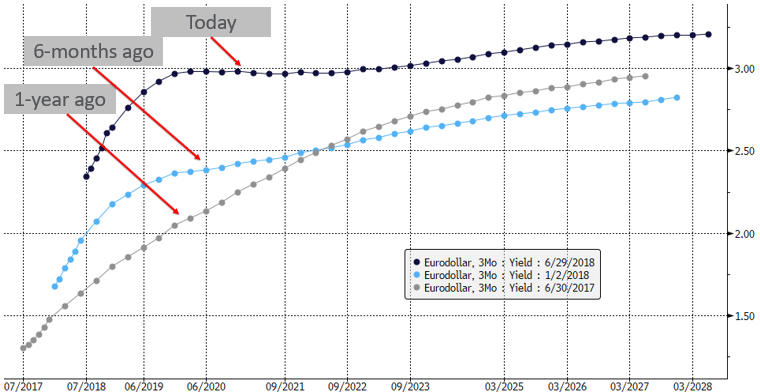