Last Week: Interest rates were flat to lower as equities rose amid signs that central banks are preparing to act if the global economy continues to weaken. With markets now pricing in multiple rate cuts from the Fed, the yield on the US 10-year Treasury note fell 11 basis points to 2.06%, the lowest level in 17 months. 1-month LIBOR followed the trend lower, wrapping the week at 2.4121%, down from 2.4298%. Also succumbing to the growing gloom, oil declined $1.50 to $53.40, slipping more than 20% from its April peak and formally entering a bear market. The US Dollar weakened and Gold rose, as investors continued to seek safety. Treasury yield volatility declined to 4.64 from 5.62.

America’s job-creation engine sputtered markedly in May. Nonfarm payrolls grew a less-than-expected 75k in May, and large downward revisions to the prior two months’ data shaved another 75k jobs from the employment rolls. The unemployment rate held steady at 3.6%, holding near a 50-year low, while wages increased at an uninspiring 3.1% annual rate, showing little momentum to move higher. In what is historically the most influential economic data point for interest rates, the news showed that companies – especially those in sectors directly related to international trade – have slowed their hiring activity over the past several months. The downdrafts now appear to be stretching into related industries as caution spreads amid slowing global growth and increasing trade tensions. All told, while the jobs data has increased pressure on the Fed to cut rates, the underlying hiring trend is still healthy (+150k, 3-month average). Thus, we doubt we’ll see a cut until the fall if it happens at all this year. Our reasons for such are detailed in the “Take-Away” section below.

Trade Wars and an increasingly cloudy economic outlook remain front and center. While we won’t bore you with the details here, with the Mexican Stand Off now behind us, there’s a glimmer of hope for real progress on the China trade front. Overshadowing the drama are consistent signs of a global growth slowdown, which is putting a lid on any substantial move higher in interest rates.

Quantitative easing Part Deux. Three of the world’s most influential central banks signaled they’re ready to ease should the global economy continue to weaken. At various events around the globe, the leaders of the Fed, the European Central Bank and the Peoples Bank of China all made statements implying that they’re ready to cut rates, offer below market-rate loans or use other methods of easing monetary policy if deemed necessary. Amid the statements, two central banks did lower rates last week: The Reserve Bank of Australia cut its overnight lending rate to a record low of 1.25% while the Reserve Bank of India trimmed its repo rate for the third time this year, to 5.75%. The news helped give upward momentum of US Treasury yields this week amid growing economic and political uncertainty.

What to Watch This Week: With the focus now firmly on the health of the US consumer, the key economic data releases this week are the consumer price index report (an inflation measure) on Wednesday and the retail sales report on Friday. Fed officials won’t speak officially this week as the Fed enters its normal blackout period ahead of the June 19th monetary policy meeting.

Due to the recent drop in rates, the Fed is reorienting its focus away from inflation data, such as the PPI (Tuesday), CPI (Wednesday), import prices (Thursday) and inflation expectations (Friday). Instead, trade tensions have forced its attention to retail sales and industrial production (both on Friday) for a timely check on the pulse of economic activity.

Take-Away: The current state of play in markets exhibits two diametrically opposed camps: bond markets screaming recession, and equity markets doubting it. The contrast mirrors the two opposing views on the economic outlook: one that expects a prolonged, multi-front trade war derailing already fragile global growth, and another that’s planning on a sudden negotiation breakthrough that ends tariffs and a Fed that rides to the rescue with rate cuts.

Last week’s surprisingly weak jobs report reminded markets that America’s economy is increasingly less immune to ongoing trade tensions. Currency fluctuations and temporary stimulus from tax cuts are no longer cushioning the economy from trade-related blows as they once did; the protection is now wearing thin as recent lackluster data on hiring, industrial production and factory orders confirm.

As the negative news rolls in, markets continue to price in an extreme number of 0.25% Fed interest rate cuts in coming months: two by the end of 2019, and another two by the end of 2020 – with the highest probability of the first cut occurring in September. While we believe rate cuts are entirely possible, the current market positioning is out of whack. While the last week’s jobs report has certainly increased pressure on the Fed to cut rates, one-month worth of data does not make a trend. When observed over a longer time frame, the hiring trend is still healthy (a +150k, 3-month average, down from a +170K, 3-month average prior to last week’s report). As such, the Fed will require more confirmation that the strains of trade wars are truly overwhelming the economy before cutting rates. The first signs of such would show up – if they show up at all – in the more concurrent, activity-based metrics like personal consumption, industrial production and hiring, several of which will be released this week.

For now, there’s little impetus for rates to move markedly higher or lower anytime soon; the mushrooming trade war fatigue has forced Treasury yields to remain range bound. Our long-term view is that we are in the beginning of the end of the decade-long growth cycle. Economic growth is still solid but will soon become increasingly patchy over time, with a runway prolonged by a Fed that is willing to provide stimulus to stretch it out as long as possible. It’s a scenario that doesn’t engender rates moving notably higher in the foreseeable future. 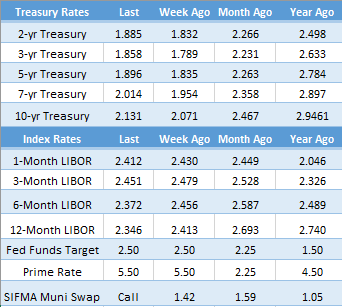 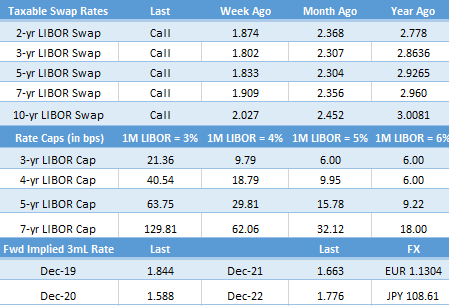 Click here for more DL Reports
Markets vs The Fed: Something Has to Give