Last Week: US interest rates rose while equities were mixed, both buffeted by increasingly unnerving rhetoric from US and Chinese officials on trade and tariffs. The yield on the US 10-year Treasury note rose 6 basis points on the week to 2.78% from 2.72% the week prior. 1-month LIBOR continued its steady march higher, albeit at a slower pace, trading to 1.8971% from 1.8773% over the same period. Oil fell slightly to $62.30, the US dollar strengthened and Gold weakened. Treasury yield volatility, as measured by the Chicago Board Options Exchange Treasury Volatility Index (TYVIX), declined to 3.85 from 4.32.

America’s job creation engine sputtered in March. US non farm payrolls grew at a fewer-than-expected 103,000 in March while the prior-two-month total was revised lower by 50,000. The unemployment rate held steady at 4.1% as wages grew at an annual 2.7% rate. Despite the slump, job creation showed a record 90th-straight month of growth. We’re unswayed by the disappointing report and anticipate a hiring acceleration through the first half of the year. The jobs report will also have little impact on the Fed’s planned slow and steady path of rate hikes this year.

Tougher tariff talk rattled markets. After China retaliated in the wake of a fresh round of US tariffs imposed on it early last week, President Trump upped the ante by instructing the US Trade Representative to consider an additional $100 billion in tariffs (in addition to the current $50 billion) on the country’s products, but made clear that he’s prepared to negotiate. Markets hope that the two sides can reach an agreement during the months-long period that it will take for the tariffs to work their way through the US legislative bureaucracy and that the tit-for-tat measures are merely negotiating tactics. A prominent Fed official publicly stated that while US trade policy is a material uncertainty for the economy, there is a need for a gradual hiking of interest rates regardless.

The NY Fed officially published the first official read of LIBOR’s replacement – SOFR. The much anticipated but mostly worthless (for now) Secured Overnight Financing Rate (SOFR) made its official debut at 1.80%, 12bps higher than Fed Funds (1.68%) and 7.75 bps lower than 1-month LIBOR (1.8775%). The event was the first step in a multi-year plan to transition more financial contracts away from LIBOR. While entertaining to watch but mostly meaningless, future reads on SOFR won’t become meaningful for at least a year as its viability solidifies. Curious what SOFR means for you as a borrower or lender? Call us.

What to Watch This Week: Despite the scheduled economic events and data releases for the week, the seemingly expanding tit-for-tat trade threats risk stealing the focus from economic data and Fedspeak scheduled throughout the week. Thankfully thus far, the only real reaction to the trade spat has been intra-day market swoons in bond yields and equity prices.  Core economic data has suggested that there’s little concern that the trade issue could jeopardize the overall economic outlook, but if anti-trade rhetoric continues to grow in size and scope, it could easily take on greater significance, and soon. Unfortunately the timing and degree of any negative effects on interest rates are nearly impossible to predict.

The Fed’s favorite inflation gauge, the Consumer Price Index (CPI) is the main focus on the economic calendar this week. We’re not expecting any real change in the inflation outlook this time around, nor any change in the outlook for Fed rate hikes due to inflation, but rest assured that the financial media will hype up the fact that year-on-year comparisons will boost inflation’s trajectory above the Fed’s goal of 2%. Why? As evidenced in the recent March jobs report, consumer’s wages remained shy of the top end of the recent range, and, as we’ve said many times before, until wages are on a sustained uptrend, inflation pressures and the need for the Fed to materially change its slow and steady hiking path will be scant.

Last but not least, on Tuesday China’s president, Xi Jinping, is scheduled to speak at the annual Forum for Asia on the steps China is taking to open domestic markets to foreign competition. Investors will watch the speech closely to see if the country takes a conciliatory or confrontational posture as it navigates increasingly turbulent trade relationship with the US.

Take-Away: Events of the last few weeks have reminded us yet again to hesitate in proclaiming that interest rates across the curve, both short and long term, will move higher. Just when you think a trend has been established, markets make a u-turn to remind you who’s boss. Most recently, the double-whammy of renewed trade-war fears and a disappointing March jobs report stunted calls for a markedly higher 10-year Treasury yield. We don’t see any reason for long-term rates to move materially higher until the threat of a trade war ceases to lurk in the shadows, and its ensuing negative economic consequences clear the market psyche. 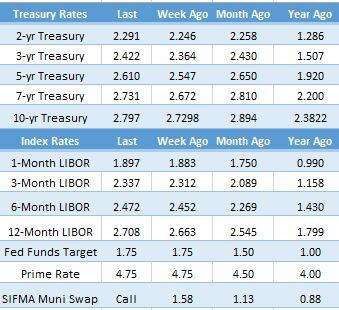 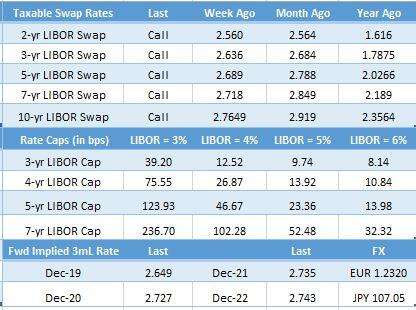