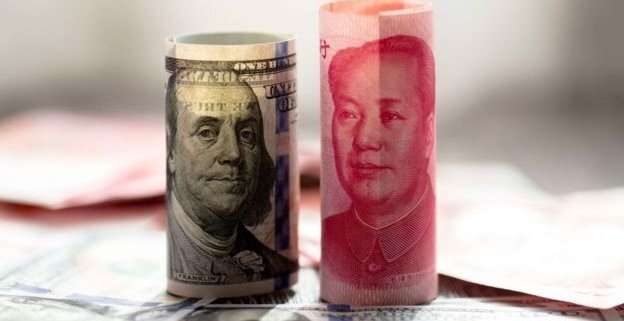 Last Week: Interest rates and equities both rose on the week as data painted a stable picture and hopes for a near-term US-China trade deal remained. The yield on the 10-year US Treasury note rose three basis points to 1.77%, as 1-month LIBOR traded mostly flat at 1.69%. Crude oil fell $1.35 to $57.05, while the US Dollar and Gold both appreciated. Treasury yield volatility, a key driver of the cost of rate caps and the value of interest rate swaps, increased slightly to 4.18 from 4.05 this time last week.

America’s growth was better than expected last quarter. Economic data showed that the US economy expanded at a 2.1% annual pace in Q3, an upward revision of the 1.9% rate reported in October, amid a small but continued increase in corporate profits. For some perspective, that’s slower than the 3.1% growth pace in Q1. Our take: While the news headline paints a positive picture, once again, the devil is in the details. A moderate upward revision to growth stemmed from an unwanted build-up in business inventories, mostly due to anxiety-induced stockpiling amid the ongoing US-China trade war. While economy-wide corporate profits in Q3 depicted a slight 0.2% increase, that’s a far cry from the 3.8% rise seen in Q2. In total, elevated inventories, weak corporate profits and a muted rise in consumers’ incomes suggest near-term growth prospects will suffer, especially considering the tepid pace of investment by businesses. As such, we expect growth for Q4 to come in near 1.7%. In short, it all equates to a big drag on interest rates moving markedly higher anytime soon.

On the bright side, new home sales and durable goods rose more than expected.  New-home sales rose in October at the fastest pace in 12 years and durable goods orders – that’s the number of new orders placed with manufacturers for delivery of factory hard goods like refrigerators and washing machines – rose 0.6% in October after a 1.4% decline in the prior month, well above consensus expectations for a 0.9% decline. The durable goods data suggest that there is now a better chance that businesses will be greater contributors to America’s overall economic growth in Q4 after subtracting from growth in Q2 and Q3. What the data means for you: signs of progress in the U.S.- China trade war in October helped to part darkening clouds on the business investment front. Extending the rebound will depend at the very least on a continued trade cease-fire and maintaining solid consumer spending momentum. Without solid, sustained positive contributions from both businesses and consumers, America’s economy will float around a 1.5% to 2.0% pace of growth and pressure on interest rates to remain lower for longer will persist.

China offers new trade concessions; markets are banking on a deal. The ongoing trade conflict is literally holding markets and interest rates hostage at present, as a “will they or won’t they” sentiment dominates markets amid building fatigue with the whole mess. In a new turn of events, Chinese trade officials said the two sides had reached consensus of sorts and agreed to continue working toward a resolution of the remaining issues addressed by the phase-one deal. The proposed agreement is supposedly more comprehensive than markets had anticipated, with deeper intellectual property protections from China having been added to the package. Both sides appear to seek a more complete deal because of the difficulties of making progress ahead of the presidential election next fall. What’s next for the trade war? All eyes are waiting to see if President Trump will delay the next round of tariffs set to be imposed on December 15th. Will he? That’s anyone’s guess, but should a delay come to pass, rates will move higher as a direct result.

The Fed validated reports that America’s economy is humming along – modestly. The Fed’s Beige Book – a scheduled summary and analysis of economic activity – reported that the US economy grew modestly through mid-November amid solid consumer spending and an uptick in manufacturing. Early in the week, Fed Chair Powell said interest rate levels are now well positioned to support a strong labor market and stable prices for consumers. Reading between the lines, this means that the Fed won’t hike or cut at this month’s Fed meeting, so we won’t see the Fed act until early next year.

What to Watch This Week: The data docket in the week ahead will be dominated by the always important November jobs report, historically the most influential piece of data for interest rates. For some perspective, the pace of new job creation has slipped in recent months: The 12-month trailing average has steadily decelerated from 235K in January to just 174K.

Markets are expecting around 190K new jobs for November, but don’t get too excited, it will be due to the return of recently striking GM workers, who’ll boost the new job number by around 46K. We’re expecting 200K in new jobs, with an unemployment rate of 3.5% and an increase in wages of 0.2%. It’s a combination with little surprises that will encourage interest rates to remain in their recent ranges. However, we’ll be scouring the jobs date for any sign that the expected loss of economic momentum into year-end is weighing on the pace of hiring, which could drag rates unexpectedly lower.

Other important data on the docket will serve to support our view that no material change in our expectations of range bound interest rates is imminent:  purchasing manager surveys will signal a continued, but abating, slump in the factory sector and consumer sentiment will remain constrained by a slow erosion of incomes. All told, it’s a recipe for a slowing economy – and a Fed on hold – into year end. What about next year you ask? Be on the lookout for our Annual Rates Forecast in early January.

Take-Away: Suddenly, it’s December – how did that happen? It seems like just a few weeks ago the weather was warm, the Fed was cutting rates, and we were laser focused on tariffs and trade. Now there’s a chill in the air, the Fed is on hold, and well, we’re still stuck in a trade war? Now that full blown trade war fatigue has set in and we’re well past the false expectation of a comprehensive US-China trade deal looming around the corner, the 10-year Treasury yield has settled into a narrow range around 1.80%. Another major factor contributing to the ho-hum moves in rates of late is the cheerful sentiment in U.S. equities, which hit new record highs last week amid a stabilization of previously weak economic data. The Fed’s recent reiteration of its “standing pat” stance through the new year and beyond only adds to the monotony.

What could break rates out of their range-bound funk? You guessed it: unexpected progress or deterioration on the trade war front, which could come on or before mid-month, the time the next comprehensive round of US tariffs on imported Chinese goods is set to be imposed by the President. We believe the US and China are miles apart and that any real agreement between the two nations on trade is far off on the calendar and may not even be possible at all. Regardless, the next couple of weeks will be fun as the tariff deadline comes at us all like a freight train. Rates could move suddenly and violently as a result. 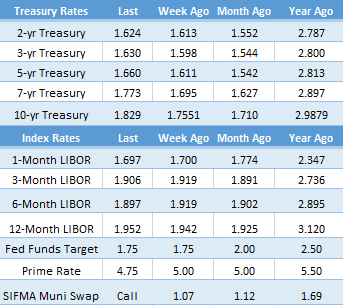 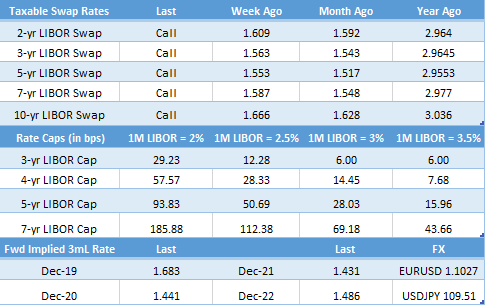 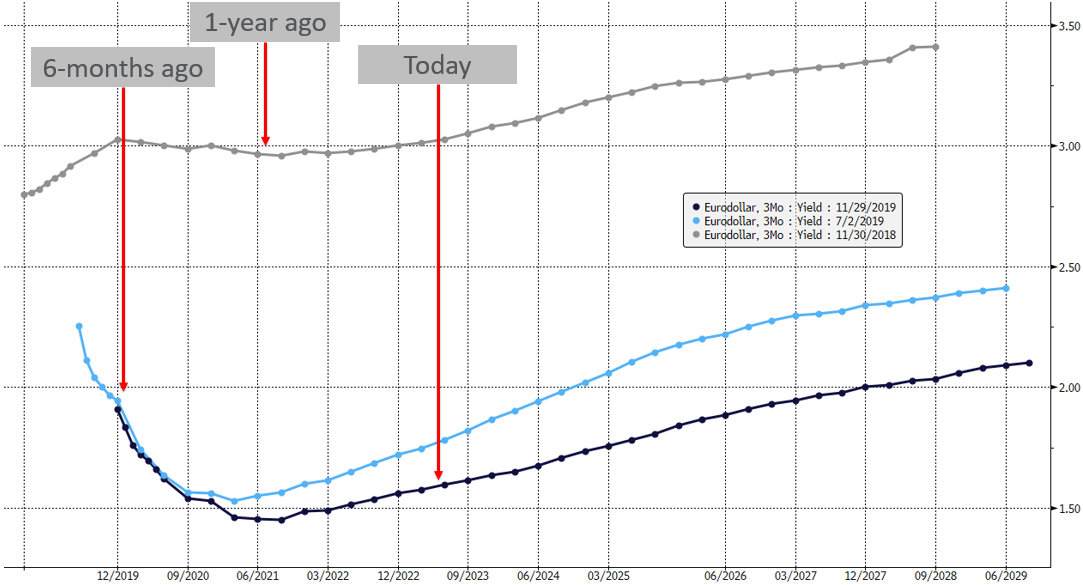