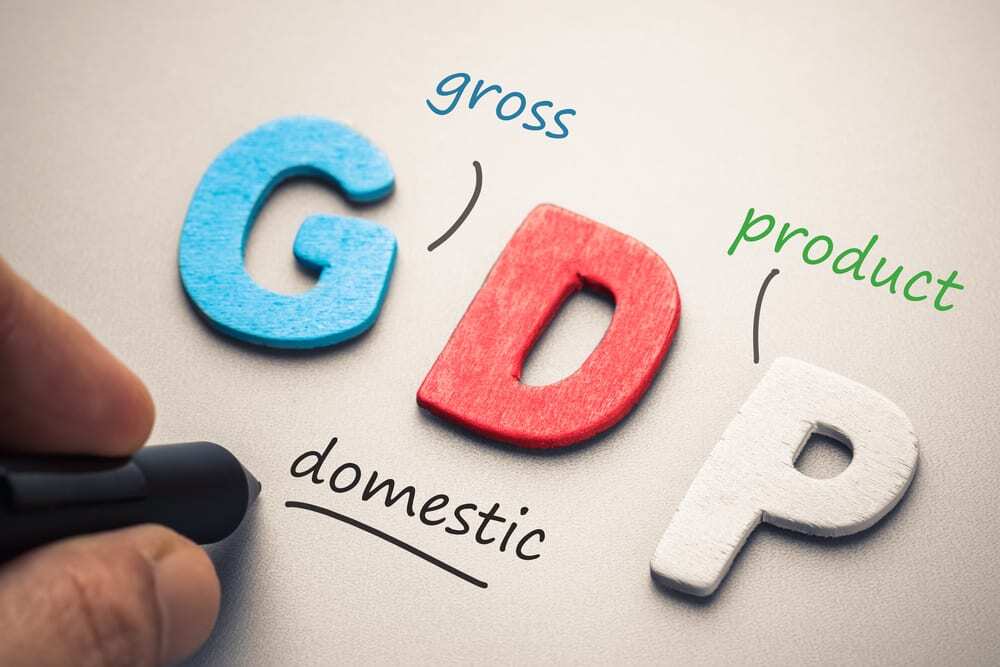 Last Week: Interest rates and equities increased slightly on the back of data releases that helped to confirm that a US recession is less likely than originally feared. The US 10-year Treasury note rose to 2.61% from 2.50% last week, the highest since the Fed surprised traders in March by shifting to a more dovish stance. 1-month LIBOR rose slightly to 2.49% from 2.47%. Oil drifted lower to $63.60 a barrel, as the US Dollar strengthened, and Gold declined. Treasury yield volatility rose slightly from ultra-low levels, to 3.56 from 3.50 a week ago.

US retail sales strengthened in March. Following months of weakness, retail sales expanded 1.6% in March from the prior month, beating economists’ expectations of 1.0% and posted the largest increase since September 2017. Auto sales and gas prices recorded strong gains, surging 3.1% and 3.5%, respectively. Excluding autos and gas, retail sales still increased by a solid 0.9%, higher than the expected 0.7% gain. Why you should care: Consumer spending activity equates to 70% of America’s economic activity; the economy essentially begins and ends with the consumer. The bounce back suggests that Q1 GDP was likely stronger than many have predicted.

US trade deficit shrank in February. The deficit narrowed 3.4% in February to $49.4 billion, the lowest level since June 2018 and below what economists expected. Exports grew by 1.1%, while imports rose by only 0.2% from the prior month. In addition, the deficit in goods with China fell 9.3%, as the US exported more to China than was imported. What it means: If we’re exporting more than we’re importing, it means that we’re making stuff – goods and services specifically – that people/entities are using outside of the US of A. As such, a shrinking trade deficit means that our exported goods are either being manufactured anew, or they’re being pulled from existing inventory for export. Got it? So…with US exports rising, we should see a corresponding increase in US manufacturing and/or a reduction in existing business inventories. Did we? See the next section…

US industrial production slowed in March confirming a global slowdown. US industrial production – a measure of output at factories, mining companies and utilities – declined 0.1% month-over-month in March, below expectations of a 0.2% gain, and slipped 0.3% at an annual rate in Q1. In addition, manufacturing production remains weak, coming in flat for the month, following declines in both January and February, edging down 1.1% at an annual rate. It was the first drop since Q3 2017. Why you should care: The data showed that even though exports increased at a solid pace in Q1, US manufacturers reined back their production, and that increased exports were supplied mostly by drawdowns from a glut in inventories. Why is there a glut in inventories? Look no further than US-China trade tensions, which spurred US and Chinese manufacturers alike to over-produce. Bottom line: Last week’s data suggests that trade tensions and the global economic slowdown dragged on the US manufacturing sector in Q1, and hence reduced the need for raw materials and manufacturing jobs. If solid growth continues however, which we expect, existing inventories will evidentially be worked through and the sector should rebound later in the year.

Angst over a Chinese slowdown that drove last month’s US Treasury bond rally has eased. China recorded a 6.4% economic growth rate in Q1, supported by strong industrial production, which surged 8.5%, and consumer spending, which grew by 8.7%. It seems that the Chinese government’s effort of throwing everything at the economy to spur growth (e.g. tax cuts, infrastructure spending and looser monetary policy) actually worked. The recent ease in trade tensions between the US and China added to the positive momentum. Nonetheless, China’s growth still is the slowest in decades, and economists and the government expect the economy to continue to slow. Currently, the government’s growth target is at 6.0%-6.5% for 2019.

What to Watch this Week: Fed officials are mum for the week, reflecting the blackout period ahead of the April 30-May 1 FOMC meeting. The key economic data releases are the durable goods report on Thursday and the Q1 advance GDP estimate on Friday. Both will determine whether the 10-year Treasury yields’ steady-but-sure rebound from 2.34% – its recent 15-month low – has further to run.

Every year for a decade running, US economic growth has followed a recurring pattern:  perform below trend in Q1 only to surge higher in Q2 as payback. We doubt the pattern will be different this time around, but we’re watching closely regardless to see how successful America’s economy was at navigating a confluence of negative events at the start of the year, specifically 1) the extended government shutdown 2) the psychological fallout among households and businesses to the Q4 stock market rout 3) an inventory overbuild at the end of last year driven by the start of the US-China trade war 4) slowing global growth and 5) consumers’ sticker shock related to their smallish tax refunds.

All told, we expect Q1 growth to come in around 1.8%. That’s well below the torrid 3.8% quarterly growth peak last year (in Q2), but still respectable and a world away from recession. If we’re right, longer term Treasury yields should continue their slow ascent in the near term. We still expect annual US growth to slow to ~2.2% for all of 2019 compared to 3.0% in 2018, as trade war tensions calm and the tailwinds related to last year’s tax cuts eventually disappear.

Take-Away: Via the steady stream of positive US economic data of late, it’s looking more and more like the steep fall in yields in March (again, when the 10-year Treasury hit 2.34%, a 15-month low) was overdone. While short-term rates (e.g. 1-month LIBOR) will likely stay anchored given the Fed’s “no hikes in 2019” pivot, should the positive economic vibes continue, long-dated yields, specifically the 5- and 10-year Treasuries, will continue to rise.  As they do so, yield curves will steadily steepen, calling recent forecasts for a US recession into question. 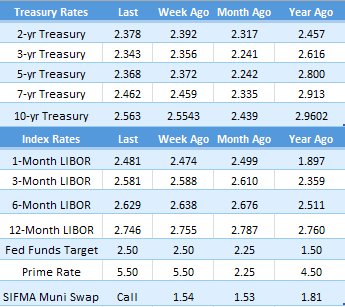 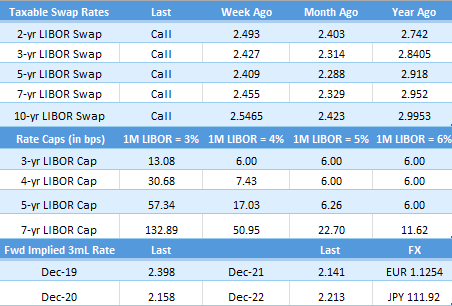 Yield Curve Inversion: What it Really Means for Borrowers
Scroll to top