Last Week: US interest rates were mixed and equities gave up midweek gains finishing the week little changed. A renewed surge in volatility was sparked by concerns that fresh White House turmoil could imperil President Donald Trump’s pro-growth agenda. Adding to volatility was a terrorist attack in Barcelona that killed 14. The combination helped drive the Chicago Board Options Exchange Volatility Index (VIX) back up to 14.75 early Friday after a fall to 11.25 on earlier in the week. US 10-year Treasury note yields edged lower on the week, to 2.19% from 2.21% a week earlier, while 1-month LIBOR edged higher to 1.2350 from 1.2279% the week prior. Oil and the US Dollar fell while Gold rose slightly.

Fed Meeting Minutes Painted a Murky Picture. Last week’s release of the July FOMC meeting indicated broadly unchanged growth expectations as well as mixed opinions on inflation. While much of the committee continued to view recent declines in inflation as transitory, a growing number seem skeptical. There were few clear implications for the timing and magnitude of future rate hikes.

Lack of inflation has central banks rethinking their strategy. In recent months markets have been anticipating that the European Central Bank will join the US Federal Reserve in beginning a long process of monetary policy normalization; however, in minutes of recent policy discussions, both the Fed and the ECB sent more dovish signals than the markets were expecting. Some policymakers were concerned that inflation is not moving toward the central banks’ 2% targets despite recent upticks in economic growth. These concerns call into question the pace of future Fed hikes and the timing of an expected taper in ECB asset purchases.

Japan’s economy kicks into gear. Fueled by increases in consumption and capital expenditures, Japan’s economy expanded at a 4% annualized rate in the second quarter, far exceeding expectations of a 2.5% rise. The economy grew for a sixth straight quarter, while inflation, though mild, ticked up for a sixth month in June. The current robust pace is not expected to be sustained as economists forecast a slower pace of economic growth for the balance of the year amid lackluster wage gains. Japan is one of the largest holders of US Treasuries. Any sustained shift in Japan’s economic performance will have an impact on Treasury yields. Ignore it at your peril.

This Week: The annual gathering of Fed officials in Jackson Hole Wyoming will take center stage this week. With both Fed Chair Yellen and the ECB’s Draghi scheduled to speak, markets will be on high alert for any new information officials share on the much-anticipated balance sheet normalization – expected to begin in October – and the degree to which Yellen favors delaying future rate hikes in the midst of backsliding inflation. Regardless of what Yellen says at Jackson Hole, the lingering uncertainty of whether she favors another term as Fed Chair will cloud her long-term policy pronouncements.

On the data front, a slew of mostly second-tier data awaits, but none of it will alter the markets focus from Jackson Hole and the Fed.

Take-Away: The Trump reform hopes are fading fast. The market’s attention is now firmly shifting from hopeful anticipation of the Trump administration’s pro-growth fiscal policies to the very real and widespread changes in global monetary policy. Combined with the Fed’s near-term unwinding of its $4.5 trillion balance sheet, a never-before seen event in and of itself, every major central bank on earth has a policy meeting scheduled in the next month. While each has its own unique growth and inflation situation to manage, nearly all will feel the effects of what the Fed does over the next several months. For now, we expect an October announcement of balance sheet normalization followed by another rate hike late this year or early next. 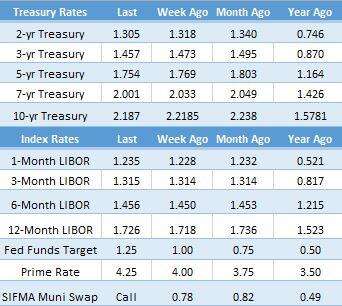 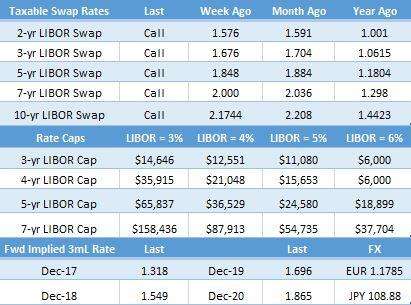