Last Week:  Interest rates surged and global equities extended gains last week, as strong global manufacturing data suggested that economic momentum continues to improve. Yields on the 10-year US Treasury and 1-month LIBOR rose markedly – to 2.49% from 2.32%, and to .8344% from .7848% respectively – as markets priced in a March 15 Fed interest rate hike. Oil and Gold fell, while the US Dollar rose. Overall market volatility remained subdued, with the Chicago Board Options Exchange Volatility Index at or near 11.50.

Hawkish jawboning throughout the week from the troika of Fed Chair Janet Yellen, Vice Chair Stanley Fischer and New York Fed president William Dudley helped drive market expectations for a 0.25% March 15 hike from just 50% at the start of the week to a near certainty by week’s end. The comments dominated markets throughout the week, trumping Trump tweets and commentary on new scandals.

For economic data, a sizable uptick in the closely watched US ISM manufacturing purchasing managers’ index – a gauge of inflation –  and a jump to a 15-year high in the US Conference Board’s consumer confidence measure were two standout data points last week, keeping the reflation, aka “Trump” trade firmly on track. Elsewhere, China’s inflation gauges showed strength as well, though the Eurozone’s and United Kingdom’s were less robust.

This Week: With markets falling all over themselves to say a March 15, 0.25% hike is a done deal, Tier-1 data releases between now and then have diminished somewhat in importance.

This Friday’s Non-farm payrolls report for February – a data set that historically has had the greatest sway over interest rates –  serves as the only major obstacle to a March 15 hike. Recent indicators point to a strong print in all aspects of the report; the number of new jobs created, wages, the unemployment rate and the number of individuals who joined/left the labor force.  We expect 190K of new jobs were created in February, after January’s above-trend 227K, and the unemployment rate to fall to 4.7%.

While a continued humming in America’s jobs creation engine is nice, it’s really all about wages. We’re expecting the number of new jobs to be eclipsed by signs of increasing wage pressures after several minimum-wage increases took effect in several states at the start of the year, offsetting declines in wages elsewhere in the economy. If the jobs report is a surprising bust – with new jobs coming in below Yellen’s 125K trend – the Fed’s tightening trend likely wouldn’t be altered, just delayed, as there’s too much upward momentum in most Tier-1 economic gauges to change course.

Other data on tap this week is US factory orders, the trade balance and import prices. All will take a back seat to the jobs report, especially so given last week’s dramatic change in the market confidence in a near term rate hike.

Take-Away: Counter to our recent calls to the contrary, the Fed did all it could last week to prepare the markets for a March hike. Barring a global cataclysm, it now looks very likely to happen. Fed officials seem suddenly eager to tighten, especially while the global macro-economic environment – BREXIT negotiations, elections in France and Germany, and concerns over China – have quieted and allow the Fed to focus domestically.

Should the March 15 hike happen, it will likely be the last we see until the summer or even later, given tremendous uncertainty on the essence, size and timing of fiscal stimulus, specifically Trump’s tax and infrastructure spending plans. The administration has yet to offer specifics and any proposals will take months to legislate. 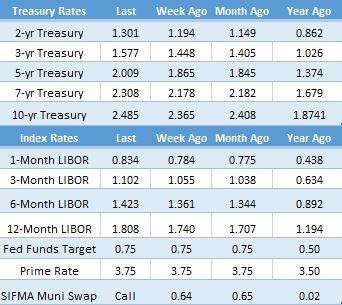 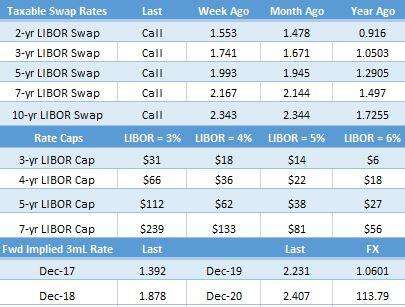 LIBOR Futures (where markets expect LIBOR to trade be in the future): 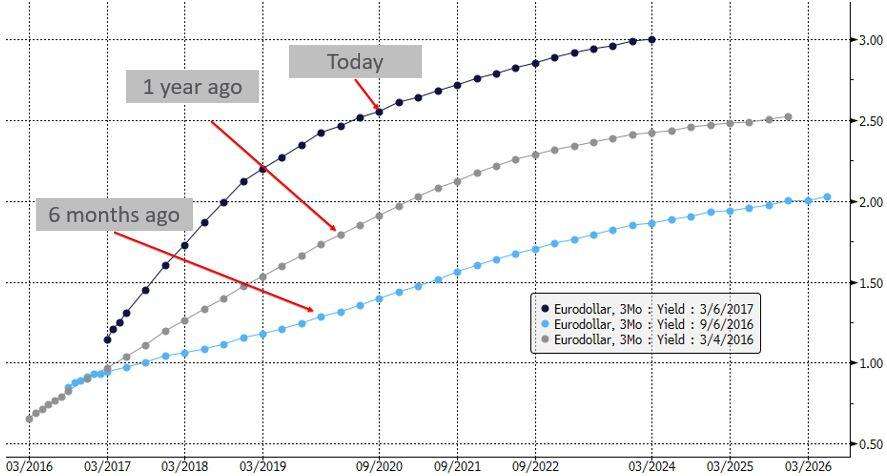